Issues of Envy and Loneliness and Low Self Esteem 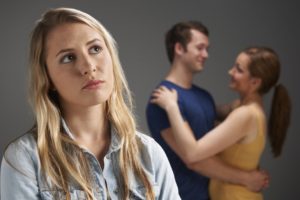 Envy is a common issue for women who are in unequally yoked marriages. Envy usually results from a perception problem —from seeing all of the other “happy” couples. Think about it. On Sunday morning at church, there is Mr. and Mrs. Smith. They are sitting there all cuddled up and hugged up. And then Mr. and Mrs. Jones are holding hands. Mr. and Mrs. Abernathy are smiling and gazing into each other’s eyes the whole time. And then there you are —sitting all alone on the pew.

I found out later that the Smiths were having problems and the Joneses were basically keeping up with the Abernathy’s. They were keeping up the pretense. I learned that while a couple looks happy to others, especially women like me, they are oftentimes struggling to keep a lid on things. Some of these couples fight and argue on their way to church or on the way back home.

Shared Commitment Rather Than Envy

Now, I am not saying that Christians don’t have happy marriages —they really do. Those with happy marriages know how to resolve their issues. They have made a commitment to solve their problems God’s way. This shared commitment is usually what an unequally yoked marital relationship may be lacking.

My point in making these observations was that I saw what I wanted to see. Because my situation was so bleak, my depression wreaked havoc with me, as I over-romanticized what was going on in other relationships. Struggling with envy, I often looked around and thought, “You know, he seems like such a good husband. I always see him with the kids. I always see him pulling up in the car to pick her up at the door after church on Sunday.” In comparison, I thought, “She has all of this, and I have nothing. Their lives look so wonderful, and look at poor me. If only my husband were saved, we would have that happy marriage that everybody else has.” [Do you see the healthiness of the first way of thinking rather than the latter? One leads to “rejoicing with those who rejoice” and one leads to envy.]

There is intense isolation in an unequally yoked marriage. However, much of this isolation is self-inflicted. I didn’t have friends, by choice, because I felt like I didn’t fit in.

Once when I was crying out to God saying, “Poor me. Poor me. I’m so lonely,” God said, “Well, get a friend.” And I said, “Well, give me one.” He said, “You have a whole church full of people; pick one.” I finally started thinking, “OK, there are some things I need to do.”

What I did was to take responsibility and take action. Too many of you are like I was: sitting at home, crying the blues, waiting on God to zap your husband and zap the church and change your whole situation —when instead all that is needed is to become actively involved in the process of what God is already doing —working things out for good.

In my case, I really didn’t want anybody to know how bad my situation was. It became easier to keep people at a distance. I smiled and laughed and talked with everybody, but kept moving. They were passing me, and I was passing them because I did not want anybody to stop me and ask, “Sabina, where is your husband?”

I didn’t want to explain that at that time, he was my “heathen husband” —by his own profession. For my husband, it was almost a joke: “Oh, I have this great Christian wife, and I am her heathen husband.” I would plead, “Honey, please stop saying that.” People would call and he would answer the phone: “This is heathen headquarters.” Looking back on it now I can laugh, but at the time I thought, “You may find this funny, but I am not amused.”

Even though allowing them to enter into my world (to see inside my home life) was challenging. When God prompted me to develop relationships in the church, I did. Over the years, I met together with women of similar circumstances. We were that much-needed support that each had sought at various points in our marriages. I facilitated or was part of several different groups —Daughters of Abigail, Joyful Meeting, Creative Counterparts, Sisters of Sarah, and BLESSED —that really ministered to my needs.

We spent time sharing how God was blessing us through our struggles; we encouraged and admonished one another to live in accordance with the Word of God, and we prayed for our husbands, our households, and each other. As we shifted our focus, we began to see the power and results of a praying wife.

Some women deal with low self-esteem because of a misunderstanding of Scripture. In the Amplified Bible, 1 Peter 3:1 says, “In like manner, you married women, be submissive to your own husbands [subordinate yourselves as being secondary to and dependent on them, and adapt yourselves to them], so that even if any do not obey the Word [of God], they may be won over not by discussion but by the [godly] lives of their wives.”

This passage says the husbands “may be won.” Unfortunately, some women take that to mean that he will definitely be won. So when their husband remains unsaved they think, “I must be a failure. It must be something that I’m doing wrong. What more can I do? What else do I need to do so that he will come to know the Lord?” It was years before José accepted Christ. I remember an occasion when I had been a Christian for six years and someone asked about his salvation. The look I received when I told them he was not saved seemed to imply that it was my fault. Certainly if I were a better or more submissive wife, he would “be won” by now.

Many have been made to feel inadequate and unworthy. Often women who are in unequally yoked marriages receive a lot of ridicule and criticism from their spouse. “Yeah right, you go to church —so what? You read your Bible —so what? Your life does not look any different to me.”

These women need to look to God for significance and value. They must come to the place where they can say,

“God is my witness. I know I am changing. It may only be a little bit at a time, but I know I am growing. And it is God who will open my husband’s eyes so he can see that. It won’t necessarily be something specific that I do. I can’t paint a big sign that says: Look I Am A Christian Now. Eventually, he is going to see the difference in my lifestyle because I am going to be a living epistle” (2 Corinthians 3:3).

We can stop our epitaphs of suffering and find out what we can do to empower our lives —to glorify God with triumphant marriages. We can stop our “woe is me” stories today and look more closely at what God has to say about His chosen vessels, who are precious and honored in His sight.

This testimony was written by Sabrina D Black, and came from the book, “Can Two Walk Together? Encouragement for Spiritually Unbalanced Marriages.” It is published by Lift Every Voice. This is a book of encouragement for spiritually unbalance marriages. It is written t women to equip and empower them in every situation to live a life that is pleasing to God.