The Thorns and the Rose 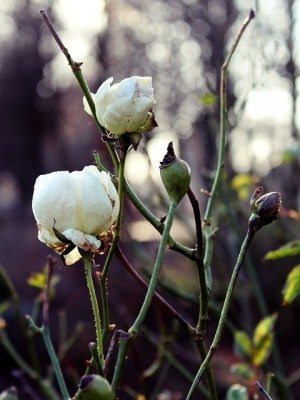 “Your spouse is like a rosebush,” I (Sharon) said in desperation one day as I sat with Jeff and Marissa in my office, “and you’re both focusing on each others thorny stems instead of your tender roots.”

They had bickered all the way through the session, and neither of them seemed even remotely aware that there cold, attacking words masked a deep longing for tenderness in there hearts.

Jeff and Marissa’s marital problems surfaced when Jeff’s company transferred him to a different office, which was located an hour and a half away from there home. This required Jeff to leave early in the morning and return home well after dinnertime. It left Marissa home alone to care for the kids and all the household responsibilities.

By the time they got in to see me she was fuming. “You just go on your merry way to work in the morning, and your back just in time to kiss the kids goodnight, and then you park yourself in front of the television. You don’t help me a bit, even though I’ve told you that I’m completely overloaded. Don’t you care about the pressure I’m under? I’m mad and so resentful you took this job!”

Jeff shook his head. “We’ve been through this a thousand times. Of coarse I help you when I can.  But you explode at everything I do. I’ve got plenty of pressure at work, trying to learn a new job, and I don’t need this.”

Their ugly cycle was unmistakable—she pursued; he withdrew. All Jeff could see was Marissa’s anger, resentment, and frustration. All Marissa could see was Jeff’s defensiveness, his cold shoulder, and the back of his head as he fled from the room. Neither could imagine what lay behind the other’s anger, frustration, and defensiveness.

“What do you see when you look at a rosebush?” I asked them. “You see the leaves, stems, and yes you are very aware of the thorns, especially when you try to smell a rose or pick one. The same thing happens when you look at each other—all you see are the thorns! All you see are your hot emotions: Marissa’s anger and resentment, and Jeff’s defensiveness and distancing.”

I went on to explain that the thorny emotions they readily see in each other are merely a display of their secondary emotions. These emotions are usually prickly and hard. They cause those around us to become defensive or to fight. Secondary emotions do not draw couples together.  Just as the thorns on a rose stem protect the rose from predators, so thorny emotions serve to protect husbands and wives against being hurt.

When Jeff saw Marissa’s reaction to his new job, he was aware only of her anger. And what was he supposed to do? What would any spouse do with an angry, resentful, rejecting, and explosive partner?  He certainly didn’t feel like cozying up to her. All he could see was her thorny and protective stem. Naturally, he withdrew.

“When I listen to her criticisms,” he told me, “I get frustrated. I push her away and shut her out. She doesn’t feel like a teammate.”

Jeff was reacting to Marissa’s thorny emotions with his own thorny emotions. He told his wife she was selfish, emotional, and that he had shut her out the first week he started his new job.

All this time, in the heart of Marissa’s heart were growing tender, succulent roots containing her longings, needs and softer emotions. These “primary” emotions are at her core, and therefore they are more vulnerable. They are the attachment longings of the heart, the feelings that really matter. That’s why I call them “root” emotions.

At the same time, deep in his heart, Jeff is very hurt. He feels he is constantly in the doghouse and nothing he can do will get him out. He feels alone, rejected, incompetent, and fearful of Marissa’s unbridled anger. We were able to determine that Jeff was reluctant to express his tender root emotions because he was afraid of Marissa’s reaction—he assumed she would attack him in his vulnerability and wound him even more.

Somehow, he found the courage to acknowledge his primary root emotions. He was able to turn to Marissa and say, “I am tired of always feeling worthless, like I am not good enough for you. Yes I know I haven’t been there for you like I should have been. But I can’t come close to you when you criticize me so much. All your words and criticisms are really hurtful. I know this job is tough for us and I’m not Superman—I’m just me. All I know is I need your support. I need to feel close to you again.”

Marissa was surprised and touched by Jeff’s words. She admitted that she had never wanted to hurt him and that all along she had only wanted to be closer to him. “I feel panicky when you pull away from me and focus exclusively on your work,” she told him. “I feel so alone, and I’m afraid you’re going to build a whole new life without me and we’ll grow apart. I guess I really miss you when you’re gone. You’ve always refueled me, and nowadays you’re just not around long enough for us to connect. You’re so important to me— and I really look forward to you coming home.”

Jeff’s mouth dropped open. He couldn’t believe that despite all of Marissa’s outbursts, she sincerely longed for his companionship. “Jeff,” I asked him, “can you hold on to Marissa’s root emotions and longings? Can you stop reacting to her thorns and instead imagine gliding your hand down the stem into the sandy soil beneath and reach for her heart?”

The effect on Jeff was quite stunning. “Yes,” he said, his voice choked with emotion. “I can do that. The thought of having to argue and convince Marissa of my love and dedication seems impossible. I can’t come close when she is so critical and blaming. But, yes I think I can comfort her loneliness and fears. If she really wants me to, I’ll be there for her no matter what.”

This testimony comes from the book, Safe Haven Marriage

-written by Dr Sharon Hart Morris and Dr Archibald Hart, published by W Publishing Group. This book concerns emotionally connecting with your spouse so you can trust him or her with your heart. When you are able to do so, you will have a safe haven marriage.

Leave a Reply to Emma from Australia Cancel reply

One response to “The Thorns and the Rose”