When Couples Are Cruel 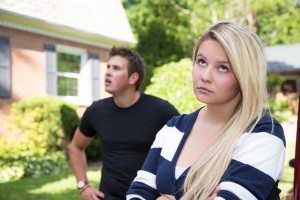 Summer cookouts can be great fun with friends —unless they’re barbecuing each other. I endured one of those backyard battles one night. John and Mary arrived a little late and wasted no time skewering each other.

“I might be able to do it if you didn’t hog the bathroom and then sit in the car honking for me to hurry up!”

“Oh, yeah, blame it on me. Is that why you’re late picking up the kids from soccer?”

The mosquitoes were less irritating.

As onlookers, you’d probably scramble to separate the combatants or change the topic —or maybe you’re that couple. This behavior raises two questions. Why would any couple act that way, and how can they change?

Why couples are cruel

My wife and I have friends who joke that their “language of love” is sarcasm and ridicule. This may seem like a funny way to express tenderness, but there may be some understandable reasons —though not excuses —for being cruel.

Cruelty was modeled in childhood. If your family of origin used put-downs as a prominent communication style, you may not be aware of its damaging effects. It may be second nature to criticize, and you may have chosen a mate who also knows that language and finds it oddly comforting. It’s often easier to maintain a familiar pattern than change.

Unresolved anger spills over. Learning to deal effectively with conflict isn’t easy, and many individuals are never taught how. In fact, many Christians believe that feeling or expressing anger is a sin. But the Bible implores us to resolve conflict quickly and decisively, not to deny and suppress the anger. Anger that is stuffed oozes out around the edges.

Beneath John and Mary’s demeaning comments are many areas of disappointment or tension: physical appearance, parenting roles and respect. All are seen in the skirmish. Their late arrival only stirred up those feelings.

Individual insecurity breeds cruelty. When a person struggles with feelings of inadequacy, he or she may deal with it by putting other people down. If you feel good about who you are and show up late for an event, you can apologize without having to blame your mate or anyone else.

Passive guilt can be used to provoke a response. John’s jabs provoke Mary’s anger, and vice versa. This is often called spite talk, and it’s a deliberate and sometimes desperate attempt to vent the pain. But spite talk is an ineffective way to communicate the hurt and anger beneath the surface.

Fear of emotional closeness erodes well-being. Intimacy creates vulnerability. To share your deepest feelings of love and desire to be loved can seem scary, which is particularly true if you’ve felt rejected.

Have you ever tried to apologize but been ignored, so you shut down? True oneness is based on a trust powerful enough to risk being vulnerable and still feel safe.

For some individuals, intimacy is foreign. They survive by maintaining distance and by not drawing near to others.

Couples get stuck in an approach-avoidance dance that leaves both partners frustrated. It’s like seeing one hand motioning for you to come closer and the other hand thrust out in resistance.

If you’re in this pattern of put-downs and cruelty, consider its destructive effects: It tears down your mate’s confidence. It puts you both in a negative light around others. It blocks intimacy. It erodes your spiritual well-being, and it teaches your children to be inconsiderate and unkind. Fortunately, you don’t have to remain locked in this dance of disrespect. You can take productive steps to freedom, and changing your patterns can affect your children and your children’s children!

How couples can change

1. Be aware of how you have been treating each other. Most couples engaged in the deadly combat of verbal cruelty have become blind to the extent of their destruction. They see their mates’ vicious attacks, yet they are defensive about their own venom. This process of discovery is not easy or painless. In fact, you may need help to see the truth. Close friends might help but it’d be better to schedule a few sessions with a marriage counselor.

2. Respect each other. Both husbands and wives desire respect. I would live in fear if I thought my wife, Melissa, did not respect me as a person. My fear would become terror if I thought she would disrespect me in front of others. I’d feel hurt, embarrassment, rejection, anger and loss of respect toward her. Still, respecting your mate may not be easy at times. I’m sure I blow it regularly, but I’m also confident that Melissa’s respect is not based solely on my performance. Choosing to express love in this way gives you greater control of your life.

3. Be a positive, confident, effective partner. It’s more fun to stroll through life hand-in-hand with a positive person. Isn’t it better to build your mate’s self- esteem than to tear it down? Nit-picking and criticism will gradually, but assuredly, reduce your mate to a person of insecurity and self-doubt.

4. Develop true intimacy. Part of marital intimacy is certainly sexual. Connecting sexually can bring two people together in a wonderful bond. It can also be a superficial togetherness. Without real intimacy, spiritual and emotional connectedness is harder to develop.

In the process of change, give yourselves a lot of grace. Neither of you planned to assassinate the character of your mate or desired to become a couple that is uncomfortable to be around. Rather than staying in the blame game, look below the surface at the causes of your conflict. Like John and Mary, you may have all sorts of hidden agendas. Maybe you’ve already identified one or two dynamics that explain your ineffective patterns. That’s the first step.

Finally, take time to learn more effective ways to develop intimacy. That includes learning how to express love, how to resolve the conflicts (which are inevitable in marriage) and how to become your mate’s biggest fan. You’ll both be more fun at summer cookouts if you’re not fanning the flames toward each other!

This article was written by Louis McBurney, Ph.D., and was formerly posted on the web site Troubled With, which no longer exists.

2 responses to “When Couples Are Cruel”