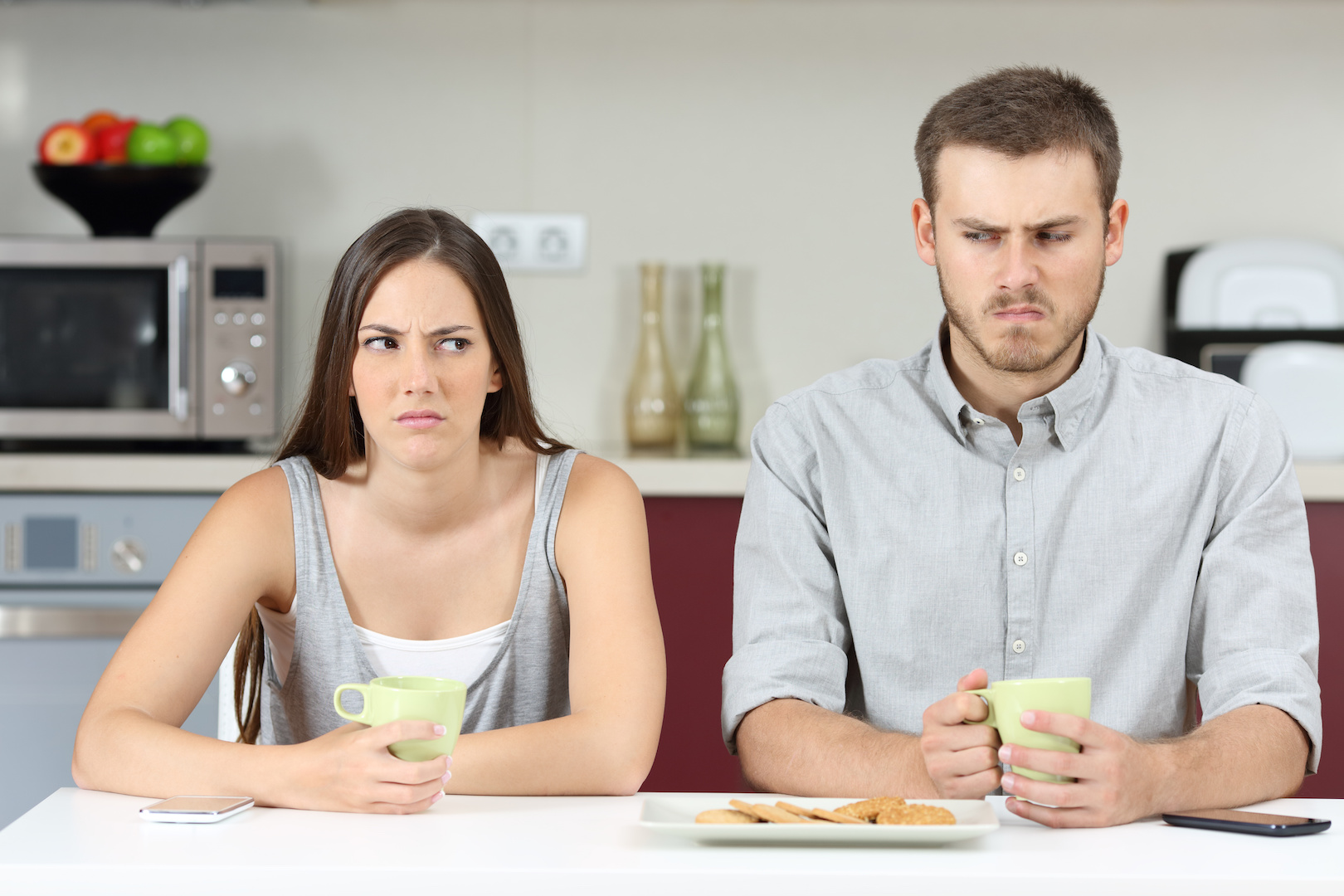 Is contempt for your spouse seeping into your marriage relationship? If so, are you the giver, or the receiver of this contempt? Or perhaps it runs both ways. But no matter what, you need to know that when the acid of contempt is being poured into the marriage relationship, it can be a marriage killer. We’ve seen it time after time. And we’re not the only ones.

“In marriage research, John Gottman claims (with credibility) that he can determine if a marriage will survive by watching a couple for 15 minutes. The signature emotion he looks for, and the one he says will kill a relationship more quickly than any other, is contempt.” (Matthew Wesley)

When the bitter acid of contempt is being poured into the marriage relationship, it can eat away at all of the good that was, is, or ever could be. That’s why it’s critical that you eliminate every trace of it.

Eliminating the Acid of Contempt

Here’s something written by Dr David Hawkins that backs up this point:

“Dr. John Gottman tells us that when contempt is prevalent in a relationship, the positive qualities are forgotten. People only remember the angry outbursts, the hostile words, and the mean-spirited, sarcastic comments. He says that couples must ban contemptuous comments from their relationship. A partnership has no room for words or body language that says, ‘you’re stupid. I don’t want to hear what you have to say.’”

Haven’t you found this to be true? Can you relate? Here’s another statement from The Gottman Institute that is important to note:

“The biggest predictor of divorce—is contempt. Contempt arises from a sense of superiority over your partner. It’s a form of disrespect. …Contempt shows up as sarcasm, name-calling, cynicism, mockery, and hostile humor. It also arises through body language like eye rolling and sneering. It’s important to avoid contempt as much as possible.”

So what do you do when you recognize that the bitter acid of contempt is seeping into your marriage? It won’t be easy to get rid of it. But it is doable. Years ago we had to work through this horrible situation in our own marriage. So we know first hand that it is possible.

We will give you a few tips in this Marriage Insight. But the hard work has to be done by you and your spouse. And it may even be that your spouse won’t be a willing “participant” in this process at first. We say “at first” very realistically here. Eventually your spouse will need to join you in getting rid of contempt in your relationship. But someone has to start. We hope you will be the brave one to do so. And eventually, we pray your actions will inspire your spouse to join you in this journey. That’s how it happened in our and many other marriages.

So here’s a tip from The Gottman Institute:

• Work on Building Fondness and Admiration.

• “Banish Contempt. Contempt is an acid that etches ugliness into love. To banish contempt means that when your husband has given in to his least attractive tendencies, his most fearful, or fearsome; when your wife has lost her focus, her patience, or her heart, this is the moment when you must exercise the x-ray vision I’m sure Yeats would have mentioned if he’d known about Superman. This is the moment when you must see through the annoying, demanding, complaining, failing, faltering wreck in front of you. You then find the strong, kind, fascinating, functional person you know your spouse wants to be.” (Lisa Grunwald)

Do what you can to banish contempt from your relationship. If your spouse is willing, make a pact to do so. And then building upon the point that Lisa made:

• Reframe the Way You Look at Your Spouse’s Actions.

Here’s something a friend told author Jerry Schreur that touches on this point:

“‘I realized that I’d come to the place where I expected Sandy to annoy me. So I was looking for those things. It was as if I didn’t expect to like her anymore. And besides, it was easier to blame her for the lack of feelings I had toward her. So I continued to look at her with a mixture of contempt and disgust.

“One day she stopped fighting back. She told me, ‘I can’t ever please you. So why should I even try?’ I thought about that for a while. And I started to notice little things she did well—like how good she was with the kids. There’s also how kind she was to me when I was overworked. Also I noticed how she didn’t complain about my parents. I began to spend more time thinking about those qualities. And before I knew it, I liked her again.

“‘Together with the help of a counselor we began to look for the good things in our marriage. The poison that had seeped into our lives almost disappeared. And while I can’t say it is the greatest marriage in the world, it sure seems to have a lot more possibilities than it did.’” (From the book, “When Prince Charming Falls Off His Horse”)

(We’ll talk more about reframing the way you look at your spouse’s actions in an upcoming Marriage Insight.)

Also, to Get Rid of Contempt:

• Let Go of Your Bitterness.

You have to know that contempt is fed by building up resentment and bitterness. There’s no doubt about it. And ultimately bitterness and resentment can kill your relationship as thoroughly as anything can.

“Resentment is to marriage relationships as cancer is to the body. At first it is small and imperceptible, but over time it grows larger and spreads its poison throughout.” (Drs. Les & Leslie Parrott)

But how do you get rid of the acid of contempt and resentment we can hold onto when our spouse hurts us? We’re reminded of something that Paul wrote in Philippians 3:12-14:

“Not that I have already obtained this or am already perfect, but I press on to make it my own, because Christ Jesus has made me his own. Brothers, I do not consider that I have made it my own. But one thing I do: forgetting what lies behind and straining forward to what lies ahead, I press on toward the goal for the prize of the upward call of God in Christ Jesus.“

Did you notice what he said? He confessed that he wasn’t perfect in the ways in which he lived. Even so, he made a point to “press on.” He did this because Jesus pressed on to embrace him. What was his goal? His goal was to forget what lay behind. Beyond that, he strained forward and pressed on to what lay ahead. He released whatever he could. And we’re sure he trusted God to help him release the rest. This is all a part of the “upward call of God in Christ Jesus.” This is also our calling.

We are to put every effort possible to let go of bitterness. Again, bitterness is a form of contempt. If you are feeling contempt for your spouse, fight it. We’re told in the Bible that when bitterness takes root it “defiles many.” You hurt your spouse, AND you hurt others, as well as yourself.

Additionally, when you are working with contempt issues:

First, ask God to forgive you for allowing bitterness to be poured into your relationship. And then ask your (non-abusive) spouse for forgiveness, if you are the one who is holding onto contempt. Yes, he or she may have done something they shouldn’t have. And that needs to be thoroughly worked through with him or her. But it takes one step at a time to dismantle walls of contempt.

We hope your spouse will work through this with you. Sadly, some won’t. But do your part in releasing your bitterness first. And then see where God leads you from there. You can’t dismantle a wall of resentment if you don’t do your part in getting rid of the bricks you contributed in building it.

“Are you living with the consequences of mistakes one of you made? Have resentment built walls between the two of you because of those mistakes? If so, come together to the throne of grace and ask for God’s forgiveness to flow between you. Ask Him to help you work together as a team. Keep short accounts by forgiving each other daily. And above all, rely on God and His wisdom for the decisions you make and the trials you encounter in your lives together.” (Cheri Fuller)

Here’s a closing tip that blogger Lori Alexander gives. We couldn’t say it any better than she does.

“How do we rid ourselves of showing contempt towards our husbands [or wives]? We begin by actively choosing to love them by the way we treat them and the words we say to them. We immediately kick out any negative thoughts we have towards them. Plus we show them kindness and grace. We are forgiving and merciful to them as our Heavenly Father is towards us. And we confess our contempt towards them and ask for their forgiveness.

“We even ask them to hold us accountable if they ever sense we are disrespecting them in any way. This means we become vulnerable towards them, which strengthens our marriages. Don’t allow contempt to destroy your marriage any longer.” (From Lori’s web site article, “Contempt Kills a Marriage“)

And here is our assignment from the Lord. This is the antidote of contempt:

“Bear with each other and forgive one another if any of you has a grievance against someone. Forgive as the Lord forgave you. And over all these virtues put on love, which binds them all together in perfect unity.” (Colossians 3:13-14)

Leave a Reply to C.J. from United States Cancel reply

7 responses to “The Acid of Contempt Can Kill Marriages”