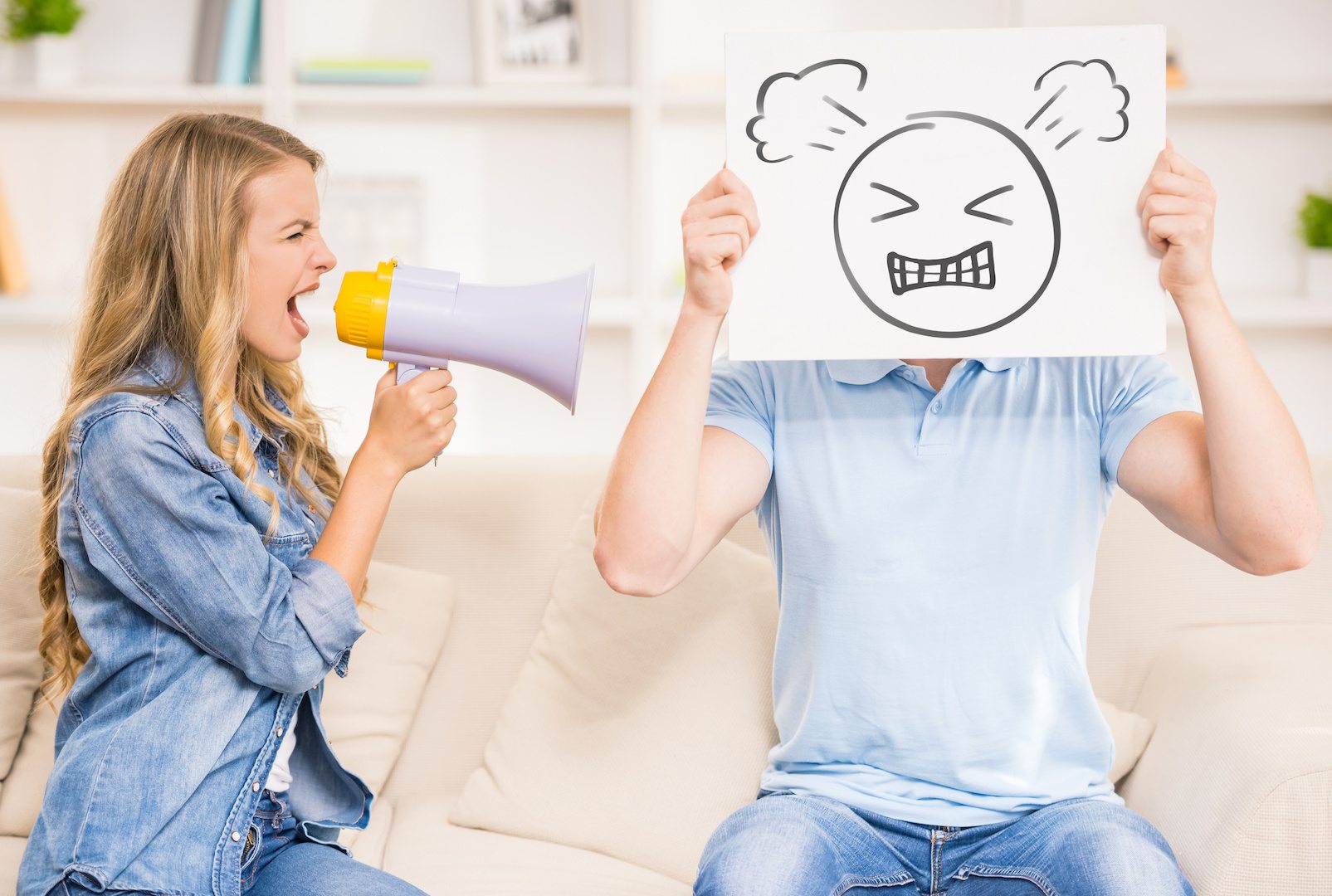 “You’ve been there. Your spouse says something, whether intentional or not, and it’s like a stomach punch to the soul. You feel assaulted, rejected, embarrassed. Immediately a counterattack strategy begins to form in your mind, one that will rival D-Day in its overwhelming impact. You feel deep anger.

“You want to load your mouth and pull the trigger. Then you want to call in a round of devastating insights that decimate your spouse’s claim like a well-targeted air assault. You want to unleash a verbal strike force that will take back every inch of lost ground and extract payment for every twinge of wounded pride. You want to leave meekness in a box back at the base, and just go to war.” (Dave Harvey, from the book, When Sinners Say “I Do“)

After reading that quote, not only did the truth of it hit us, but the following scriptures came to mind:

“A fool gives full vent to his anger, but a wise man keeps himself under control.” (Proverbs 29:11)

“An angry man stirs up dissension, and a hot-tempered one commits many sins.” (Proverbs 29:22)

Are We to Stuff Anger?

Since the above warnings come from the Bible, does that mean God expects us to stuff in the anger we feel for one another rather than expressing it? Does it mean that we are fools if we let our spouse know how angry we are at him or her? No… it means that we need to be careful of the way, and the timing in which we vent it.

“Do you see a man who speaks in haste? There is more hope for a fool than for him.”(Proverbs 29:20) Giving full vent to our anger in haste (without considering the consequences or the end result) is what makes us a fool and leads us to sin. “A fool finds no pleasure in understanding but delights in airing his own opinions.“ (Proverbs 18:2)

Expressing our concerns can actually be helpful. It can result in eventually drawing us closer together. But it can also backfire on us if we’re not careful in how we let it be known.

“A couple’s mindset about conflict and how they resolve it is the single most significant predictor of whether or not a marriage can thrive. What couples often don’t understand about conflict is that it’s not about having the last word. It’s about taking the time to understand where the other person is coming from and the willingness to deal with the issues at hand in a constructive way.” (Janet Bales)

To explain a bit more on this subject we’d like to share something written by Julie Baumgardner featured in the Chattanooga Times Free Press several years ago. The article titled “Anger in Marriage” reads:

“Mark and Lori Kuebler were planning to redecorate their home. But they didn’t agree on how to accomplish the task. At one point Lori made a suggestion. Mark responded by looking at her, laughing and saying, ‘Are you serious?’ What started out as a small disagreement quickly escalated into a blow out. ‘My feelings were hurt and I felt belittled’ said Mrs Kuebler. ‘We ended up not speaking to each other for several days.’

“For ’20 years, I’ve worked with thousands of people to help them learn how to appropriately deal with their anger,’ said Paul Hegstrom, Ph.D. Founder of Life Skills International. This organization was developed to teach hurting people the skills they should have learned in a balanced loving home. All of us have experienced the emotion of anger. Because most people have never been taught how to deal with anger constructively, people are often confused about what to do with their anger.

“According to the many of the latest movies, if a person is angry the appropriate response is to seek revenge, which usually equates to violence. Interestingly, research validates that 96-98 per cent of what people get angry about is rooted in childhood. ‘When people have been wounded they tend to gravitate toward and marry a person that they believe can fulfill the losses in their childhood,’ said Dr Hegstrom.

“A woman who grew up without a father might gravitate toward someone older and seemingly wiser whom she believes can help fill the void she’s feeling. Or a man who was never listened to as a child might choose a mate that appears to be a good listener.

“When their mate innocently does something to trigger emotions about those childhood losses, instead of understanding what’s at the heart of their anger they become angry at their mate. For example, a wife becomes angry with her husband for arriving home 30 minutes late. She’s irate and he doesn’t understand why this is such a big deal.

“Looking back at this lady’s childhood we find out that her parents divorced because her father was having an affair and would frequently come in late. Her anger stems from fear that her husband might do the same thing to her BUT this is never discussed. Anger is always a secondary reaction to a primary feeling.

“In order to get control over anger, Dr Hegstrom encourages individuals to identify how their parents and grandparents handled anger. What kind of losses did you experience during childhood? The next step is to identify what anger is and where it’s coming from. Is it rooted in feelings of hurt, invalidation, frustration, fear, anxiety, helplessness, hopelessness, inadequacy, guilt, etc? These are trigger points.

“Once a person knows their trigger points, instead of always reacting with anger they can step back, take a time out and say, ‘This is how I responded to what you said. Is that what you meant? When couples stop to discuss the little things, they are resolving conflict versus just reacting.’

“‘When individuals begin with childhood issues they begin to grow and heal in these areas,’ said Dr Hegstrom. ‘This process takes time. Many couples expect too much, too quick without any work. The value of a relationship is always greater than the conflict of the moment. If a person is teachable the issues are fixable.’

“A couple of weeks ago the Kueblers went on a trip with some friends. Mark and Lori ended up having a disagreement. The kids went swimming and Mark and Lori stayed in the room. After a period of silence both of them looked at each other. They said, ‘We need to settle this and move on. We actually talked without raising our voices and without getting angry,’ said Mrs. Kuebler.

‘Once you realize you’ve come to that point where you can talk without yelling at each other it feels so good. When you’re yelling you’re not going to get anything settled, you’re just going to make yourself even angrier. When you recognize ‘we need to do things differently’ you realize you’ve accomplished something in your marriage.'”

You may think it’s too much of a hassle to LEARN how to resolve conflict the way marriage educators recommend. It seems awkward and “unnatural” to argue in such a manner. But we want to ask you, how is it working for you the way you’ve handled arguments up to this point? Are you satisfied with the way you’re resolving your conflicts?

Remember, we’re told in the Bible that we’re to treat each other as more important than ourselves. Are you doing that? Does your spouse feel heard and understood by the way you express yourself? “If anyone considers himself religious and yet does not keep a tight rein on his tongue, he deceives himself and his religion is worthless.“ (James 1:26)

Gandhi once said, “My life is my message.” How much more this should be true for those of us who are Christ followers! What message are you giving out in the way you’re relating to your spouse? Are you communicating the gospel with and without words in the way you are handling your end of the conflicts you are having with your spouse?

If not, pray about what you can do about it. “Do not let any unwholesome talk come out of your mouths, but only what is helpful for building others up according to their needs, that it may benefit those who listen.” (Ephesians 4:29)

Keep in mind that we have many articles and tools posted on our web site. The Communication topics will particularly help you in this mission.