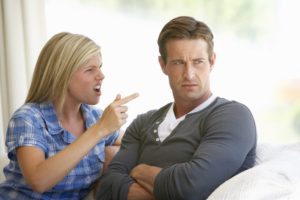 Are you and your spouse confronters or avoiders when you argue with each other. Or perhaps on of you is a confronter and the other is an avoider when it comes to conflict.

“There are as many ways to fight as there are personalities. Some simmer, and some explode. Some attack head-on, and others blind-side. But two opposing familiar styles are what some call the CONFRONTER and the AVOIDER, or the ATTACKER and the RETREATER. Others label these approaches the expressive and the non-expressive.” (Jack and Carole Mayhall)

That’s what we’re going to be discussing in this marriage message: differing styles of disagreeing. Here’s what Jack and Barb Snyder say about this subject:

“Usually the non-expressive (avoider or retreater) person will want to walk away from conflict. However, the expressive (confronter or attacker) wants to talk about it, find out what’s wrong, and be friends again. Non-expressives do not want to talk about it, and believe that if they don’t, it will go away. They feel if they just let it alone, everyone will remain friends.”

That of course makes sense to the non-expressive person. But it’s something that frustrates the expressive person to no end. Unfortunately, both are sure they’re right in all of this.

So how do we deal with it? That’s a good question. It’s one that Steve and I struggled with for many years and still do sometimes. At times we forget what we’ve been learning through the years and end up resorting to our old ways. This usually ends up in frustration until we remember to find ways to compromise.

So, for the rest of this message we want to inform (or remind) you of the different ways of approaching disagreements.

Here’s want Jack and Carole Mayhall from their book, “Opposites Attack” (no longer being published) has to say about CONFRONTERS vs. AVOIDERS:

Whatever you name them, they’re easy to identify, and so are their techniques. The positive aspect of what we’ll call the CONFRONTER is that conflict issues are brought out into the open, talked about, and ideally, worked through to a conclusion. But confronters want to confront RIGHT NOW —anytime, anywhere, and anything. And sometimes their timing is awful.

The WITHDRAWER knows that at times silence is golden because issues can look monstrous when you’re tired, sick, or struggling with other pressing problems. Sometimes a little distance is all you need. It helps you to see that the “Creature from the Lost Lagoon” is really just a small ordinary toad.

Both types, however, often use unfair techniques. The CONFRONTER is frequently an expert at bringing up the past. One man said, “When we quarrel, my wife becomes historical.” “Don’t you mean hysterical?” his friend asked. “No, I mean historical. She brings up everything I ever did.”

CONFRONTERS are also adept at hauling in secondary issues:

“And not only won’t you help around the house, you forgot to pick me up from the hairdresser last week!” They tend to exaggerate and intimidate. They may scream, and even use an “ultimate” threat such as, “Maybe we ought to get a divorce,” or “You’d like me to commit suicide, wouldn’t you?” Some may also use humiliation to intimidate with exaggerated statements such as “How can you be so stupid?”

WITHDRAWERS have their own methods.

Obviously, the approach is to duck the confrontation in any way possible. It’s about being too busy to talk, and postponing the discussion. They mumble “Why don’t we talk about this another time.” Or they say, “Let’s not make a big deal out of this.”

When forced, they’ll often sidestep the issue. They do this by (1) changing the subject, (2) interrupting and thus not allowing the other to finish the statement. They also do this by (3) crying, or (4) surrendering before the discussion is over. Withdrawers may also refuse to talk about it. They may ignore it, sulk, pout, or give the cold shoulder for days on end.

Both confronters and withdrawers use the tactic of sarcasm and ridicule. Both may be quick to jump to a conclusion, try to read the other’s mind, grab the old standbys “always” and “never,” or use cold logic in refusing to deal with hot emotions.

If both partners are withdrawers, a marriage’s growth and intimacy are in great danger. If both are confronters, beware! The ideal seems to be to have one confronter and one withdrawer with both being willing to learn from the personality of the other.

The confronter needs to learn timing, peacemaking, and tact. The withdrawer needs to learn honesty, the ability to share feelings, and discipline to face issues as they come up. Why? It’s in order to obey God. God tells us to “speak the truth in love” (Ephesians 4:15). This is both an admonition to unloving confronters to speak in LOVE, and also a command to withdrawers to SPEAK.

Scripture abounds in instructions concerning conflict, such as “faithful are the wounds of a friend” (Proverbs 27:6, NASB). “Admonish one another with all wisdom” (Colossians 3:16). “Keep short accounts” (that’s my translation of Ecclesiastes 8:11. “When the sentence for a crime is not carried out, the hearts of the people are filled with schemes to do wrong”). And “If your brother sins against you, go and show him his fault” (Matthew 18:15). These commands for all Christians are especially necessary between husbands and wives.

Some “Remembers” Before You Start:

Whether we are withdrawers or confronters, God has established some rules for our behavior in the midst of conflict. Let me suggest a study in the book of Proverbs to find your own list, but here are a few principles from the Living Bible to start you off. Review them to prepare yourself when you know you’re heading into a conflict situation:

Remember to keep your cool.

Someone has said that emotions have to be cooled until the fight takes the form of a problem to be solved. As Proverbs puts it: “A fool is quick-tempered; a wise man stays cool when insulted” (Proverbs 12:16).

Remember to lower your voice instead of raising it. “A soft answer turns away wrath, but harsh words cause quarrels” (Proverbs 15:1).

Remember to think before you speak. “Self-control means controlling the tongue! A quick retort can ruin everything” (Proverbs 13:3).

Remember to be kind and humble.

Both withdrawers and confronters need godly maturity to avoid trying to “win” a battle.

Confronters want to win by overpowering the other person; yet God wouldn’t have us be guilty of either power-grabbing. Withdrawers try to win by silence. Not only must we be careful of our motive in a conflict, but we must avoid arguments that aren’t allowed to end.

…To fight —that’s okay. To fight fairly —that’s growth. But to fight with kindness and love —[considering the other’s needs as more important than our own as told in the Bible] —that’s grace!

We hope you will decide to find ways to resolve your disagreements as marriage partners in partnership with God!

When confronting your spouse, the following article is a good one to read: