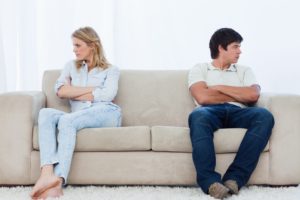 Do you ever feel like you just can’t communicate with each other like you used to before you got married? While dating, you were able to emotionally connect with each other in meaningful and satisfying ways. And yet now, it’s different. Now you are noticing your differing styles of communication. Isn’t it puzzling how that can change after marriage?

Part of the reason is because of bio-chemicals that are running through your system when you’re first attracted to someone. Research shows that your brain chemistry changes for a period of time where you experience a state of heightened euphoria. Your likes and dislikes change during that time frame in importance. Eventually, the chemistry changes settle down and differences become more noticeable (often irritating).

That’s the “reality” stage when it becomes important in finding ways to build relationship bridges to bring you together rather than erecting walls that emotionally separate you. You need to work to pro-actively “marry” your differences together in some way.

We talked about one type of communication difference in Marriage Message #204, where one spouse is an “Amplifier” and another is a “Condenser.” But there’s also the verbal style where one spouse is a “Feelings” communicator, and the other has a “Factual” approach. Jack and Carole Mayhall explain some things we all could learn from on that issue written in their book, “Opposites Attack” (which is unfortunately no longer being printed).

Here’s a portion of what Jack and Carole write:

“I am beginning to believe that the way most husbands define ‘good communication’ is about as similar to the way most wives define it. It’s as similar as a giraffe is to a hippopotamus. They’re both animals. But the similarity begins and ends there.

“Take a person who is emotional and subjective. Throw in her love for having deep, feeling-type conversations, then add a spouse who is objective, logical and factual —where his primary love language is that of care-giving and protection. Send them out for dinner for 3 hours to talk. They haven’t really talked for some time. So they both start off with empty communication cups. Let’s watch what happens.

“An hour goes by while they catch up on what has been happening at work. They catch up with their schedules, with the children, and with their friends. His cup is now 50% full. Hers is at the most 5% full. They spend another hour discussing a problem he’s having with a client. They consider what they want to do on their next vacation. And they evaluate the status of their financial planning. His cup is now up to 80% full and hers is 15%.

“During their third hour they share what they’re learning in Bible study. And they share what they’d like to see happen in the small group they’re part of. The dinner is over, and his cup is 90% full —and hers? It’s maybe 25% full. As they leave the restaurant, he thinks, ‘What a great time of communication we’ve had!’ She’s thinking and feeling, ‘We’ve only just begun! And now we won’t have time to really talk!’ He says, ‘We’ll have to do this again next month.’ She says, ‘How about tomorrow?’

“For you feeling-sharers, I don’t need to spell out what’s happened here. But for you fact-oriented people, let me explain. The wife loved every minute of the 3-hour conversation. But she needed more. To fill her communication cup, part of the 3 hours would need to have been spent sharing the joys, sorrows, frustrations, delights, and wonders of everything from problems at work, to the insights of Bible study, to the concerns for the children.

“She’d also want to explore her responses to each of those joys, sorrows, frustrations, delights, and wonders. And the final portion would be having her husband share his feelings about these issues. Then her cup would be overflowing!

“Here’s a tremendous question for a facts-person to ask a feeling-person. ‘On a scale of 1—10, with 10 being high, how are you feeling at this moment about yourself as a parent, in your job, as a friend, as a child of parents, as a spouse, and in your walk with God?’ Then to put the icing on the cake. Share with your spouse how you feel about one or two of the above.

“If you ask any 10 couples to rate their success in communicating, I believe that in 8 or 9 cases the husband would say, ‘We’re doing great. I’d rate us at least an 8 or 9 on a scale of 10.’ And the wife would look embarrassed because she’s rating them a 2. Why? It’s because most women think they haven’t really communicated unless they’ve shared on a feeling level. But most men are satisfied with stating and discussing the facts.

“So how do you come to terms with this great disparity? Slowly, you expect it to take time, maybe even years, because both of you must change. The subjective, feeling-oriented person must deal with, and in many cases change, their expectations.

“We once asked a counselor of engaged couples what was the difficulty he ran into most frequently. Without a moment’s hesitation he replied, ‘Unrealistic expectations.’ Engaged couples aren’t alone in this area. One married couple drove four hours to see us about some difficulties they were having. During the drive, the wife let out all her frustrations, feelings, and thoughts to her husband, who patiently listened and responded.

“As they spoke to us later she said, ‘Oh, if we could just do this every day, we wouldn’t have any problems.’ Her husband rolled his eyes heavenward, and I smiled as I said, ‘Your husband would go crazy if he had to spend four hours every day talking about feelings.’ He nodded emphatically.

“That wife needed to deal with her unrealistic expectations. Rare is the person who can explore deep feelings for several hours a day. There are more who can do it for several hours a week but for most fact-oriented people, several hours a month is more realistic, and those hours would need to be broken into several segments. (For this reason, I’m convinced a feeling-type woman needs a close female friend who is like her to relieve the husband of being the only one with whom she can explore emotions.)

“But while many must face up to their own unrealistic expectations, objective people have to become aware of needs not their own. They need to develop a desire to meet those needs. And they need to pray for the willingness both to listen to the feelings of a spouse and also to express their own emotions.

“This requires unselfishness, for it’s difficult to take the time to probe and listen. But oneness demands it. Sharing just facts is only scratching the surface. The unsatisfied partner may become unhappy and start pushing destructive buttons in order to get attention. [You may find it helpful to read an article written by Gary Sinclair, When Those You Love Push Your Buttons.]

Again, we are to “marry” our styles in some way —giving and taking, so both spouses experience satisfaction of some type.

We know the above info just scratches the surface, but if you’re having problems communicating with each other, please prayerfully consider it as a starting point. We have a lot of material on this web site that can help you and we lead you to other resources to help you, as well (such as the one below).

From the Crosswalk.com article, “Opposites Attract and Drive Each Other Nuts” (written by Deborah Raney and Tobi Layton), here are a few discussion questions to talk over as partners. They may help you to draw closer together, rather than letting your differences divide you:

– In what ways are you and your spouse opposites?

– How did those differences cause you to be attracted to each other? Did marriage change your perspective?

– In what ways do your differences cause conflict between you?

– Have you seen ways that God uses your opposite traits to strengthen you individually? As a couple?