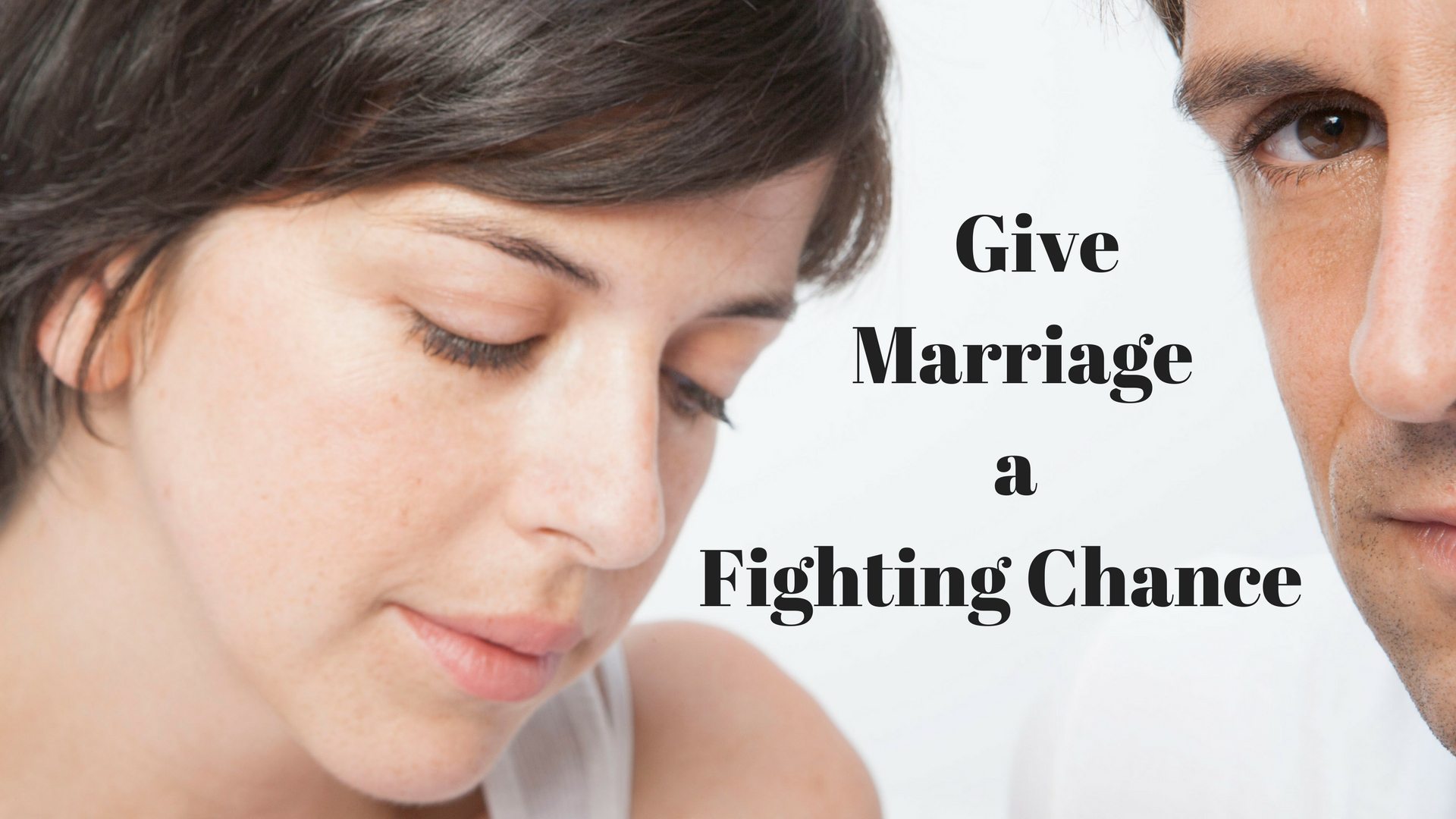 So many marriages are breaking up all around us. It’s sad to see love relationships that start out so beautiful end in such defeat! That’s a big reason why we work to help couples navigate the many troubles they encounter in marriage. With God’s leading we work to “give marriage a fighting chance.” We know with God, all things are possible!

To help you in your marriage, we’ll be sharing something Dr Randy Carlson (from Theintentionallife.com ministry) wrote a while ago. As a matter of fact, Randy named his blog, “A Fighting Chance for Your Marriage.” In it, he gave three principles to remind us that sometimes we do need to “fight” for our marriages. That’s what we call a “good fight” (if it’s done in a healthy way.

Please read Dr Randy’s thoughts on this issue and then we’ll add some of our own within [brackets] and afterward.

A Fighting Chance for Your Marriage

Peace is not the absence of noise. Have you ever thought of that? It’s particularly true in marriages. Perhaps you believe that if there are no loud words, no heated exchanges—essentially, no fighting; everything must be okay. The problem is, if there is no fighting, it can mean there is no ‘anything.’

There are a lot of marriages dying today in silent apathy. Men in particular, but women as well, can mistake routine for satisfaction. If everything is taken care of —the home is neat, the kids are bathed, the bills are being paid, the food is on the table —they believe everything is fine. But under the surface there are a lot of ongoing and unsolved problems. What can you do to give your marriage a fighting chance?

Settle the fact that your vows do matter.

Your marriage commitment was for a lifetime. You said, ‘I do.’ You need to live as though you meant it. Therefore, you must set aside other priorities to make your marriage work. That’s what a marriage is, by the way; it’s work. You want to think of it as being nothing but pleasurable, existing to meet your expectations. But that is not reality.

Think of it like a bank account. Your marriage is only going to grow as long as you’re depositing more into it than you’re withdrawing from it. Ask yourself, ‘What more can I put into my marriage to show my spouse that I am truly committed to this relationship?’

Keep in mind the Biblical principle to think not only of your own interests, but the interests of others.

That means you are to make the marriage —and your spouse —more important than yourself and your perceived needs. Get behind the eyes of your husband or wife. See life like they do. Sacrifice yourself for the benefit of the marriage. Ask your spouse, ‘What are some things you need from me than I am currently not providing for you?’

Don’t be afraid of conflicts.

Instead, face them head-on. Then know how to make up —not remaining bitter or resentful. Instead let the disagreement enhance your understanding and respect for each other. There are a lot of silent marriages that are really not at all peaceful. But there are those that have some conflict —sometimes even argumentative and angry —that are peaceful because those couples can resolve their conflicts in a Biblically appropriate and constructive way.

“When you, as husband and wife, are able to:

“You’ll forever wake up the silent apathy in your marriage. You’ll also begin moving toward the deeper affection and intimacy you need to keep it alive and growing. Remember your vow! It was promised to be kept ’til death do you part! And that’s far more than just a fighting chance!”

I (Steve) used to think that if there were no “loud words” or “heated exchanges,” then everything must be okay in our marriage. I was wrong. Sadly, I was content with “silent apathy.”

But after many years of living under this delusion, I finally woke up to face the facts. Little irritations can grow into big resentments when they aren’t properly dealt with and resolved so BOTH marital partners are satisfied. This includes me AND Cindy. But I had to wake up first; and then I had to learn new skills to resolve conflict in healthier ways before our marriage truly had a “fighting chance.”

I’m glad to say now, that I am a ‘Recovering ‘Silent Apathetic.’ I say recovering because I can still fall back into the old patterns of silent apathy. But I’m now totally committed to better face the issues we encounter.

Cindy and I believe it’s important for both of you to identify the weak areas of your lives (as we had to in ours) that can leave you vulnerable to all kinds of marital problems. It can be silent apathy, passive-aggressive behavior, yelling, lying, cheating, or any number of other character flaws and sins that need to be addressed.

We must realize that the enemy of our faith knows our weak areas and will exploit them to the fullest to try to get us to wreck our marriages. Therefore our best “defense” is a good “offense.” That means we don’t shy away or ignore our problems …rather we identify those areas and find ways to correct them. Again, I like the way Dr. Carlson phrased it, “fight FOR our marriages.”

That’s one of the reasons we started Marriage Missions a number of years ago. We wanted to provide help to those who are married. It’s important to not only to identify the issues that need attention, but also help find solutions (to fight for the marriage). This is to be in a God honoring way, to strengthen the covenant entered into on our wedding day.

And because of that, we ask for your prayers. This ministry was born out of prayer, and has been sustained by God through prayer. It will flourish both now and in the future because you are joining with us in prayer and support. Whatever we lack —we are trusting that God will provide.

Together, in the mission of our marriages and in the ministry God calls us to, the challenge is to:

“Fight the good fight of the faith. Take hold of the eternal life to which you were called and about which you made the good confession in the presence of many witnesses.“ (1 Timothy 6:12)

One response to “Give Marriage a Fighting Chance – MM #317”