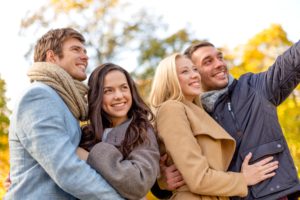 A long time ago, the Lord made my husband and me aware of the importance of guarding our hearts and our marriage. This includes being careful of the friends we allow ourselves to get close to —whether it is of the same sex or opposite sex. If there is any opportunity for this friend to be any type of threat to our marriage, it’s better that the friendship goes off to the side to protect our marital union. We needed to set marital boundaries with our friendships.

We’ve seen it over and over again where “friends” or the spouses of friends get a little bit too “friendly.” Eventually the line comes out where they tell their spouses, “We never meant for it to happen.”

Some good advice on this comes from Gary and Mona Shriver, who wrote the following in their book, Unfaithful

“‘It just happened’ is a common explanation for adultery. It exposes how little we understand the steps that got us there. When we don’t have appropriate hedges in place we invite it to happen.

“…You have to admit your vulnerability before you can recognize the need for protective measures. Safety glasses were created because someone got hurt. Don’t let that someone be you or your spouse.”

Some may think we’re too cautious on this. But we’d rather be cautious and protective of our marriage, than be sorry and hurt afterward.

I totally agree with the advice that Sheila Wray Gregoire gave in her article, Supporting Friends Marriages. She wrote:

“Make boundaries with the opposite sex, and stick to them. Try, as much as possible, not to be alone with a man who isn’t your husband [or a woman who isn’t your wife], unless you can’t avoid it at work. Here’s why this is important: let’s say that you’re not worried at all about you straying, because your relationship is 100% great with your husband [wife]. But you worship lead on a praise team, and your co-leader is a guy [gal]. And you start getting together with him [her] to plan the upcoming service every Tuesday night.

“Now, nothing is happening between the two of you. You don’t think about him [her] that way at all –and he [she] doesn’t think of you that way at all, either. Occasionally you text him [her] when an idea pops into your head, and it’s totally harmless.

“The vast majority of affairs that start begin perfectly innocently over a friendship. Don’t put yourself in that position, but also support others who are trying to maintain boundaries so that they won’t fall with someone else.”

Good advice, huh? We think so!

We care a great deal about our friends, but within reason. Boundaries and hedges are there for a reason. We need to put our own into place and honor those that build them to protect their marriages, as well. Sure hope you are doing the same!

Leave a Reply to Lou from United States Cancel reply

6 responses to “Marital Boundaries With Friendships”