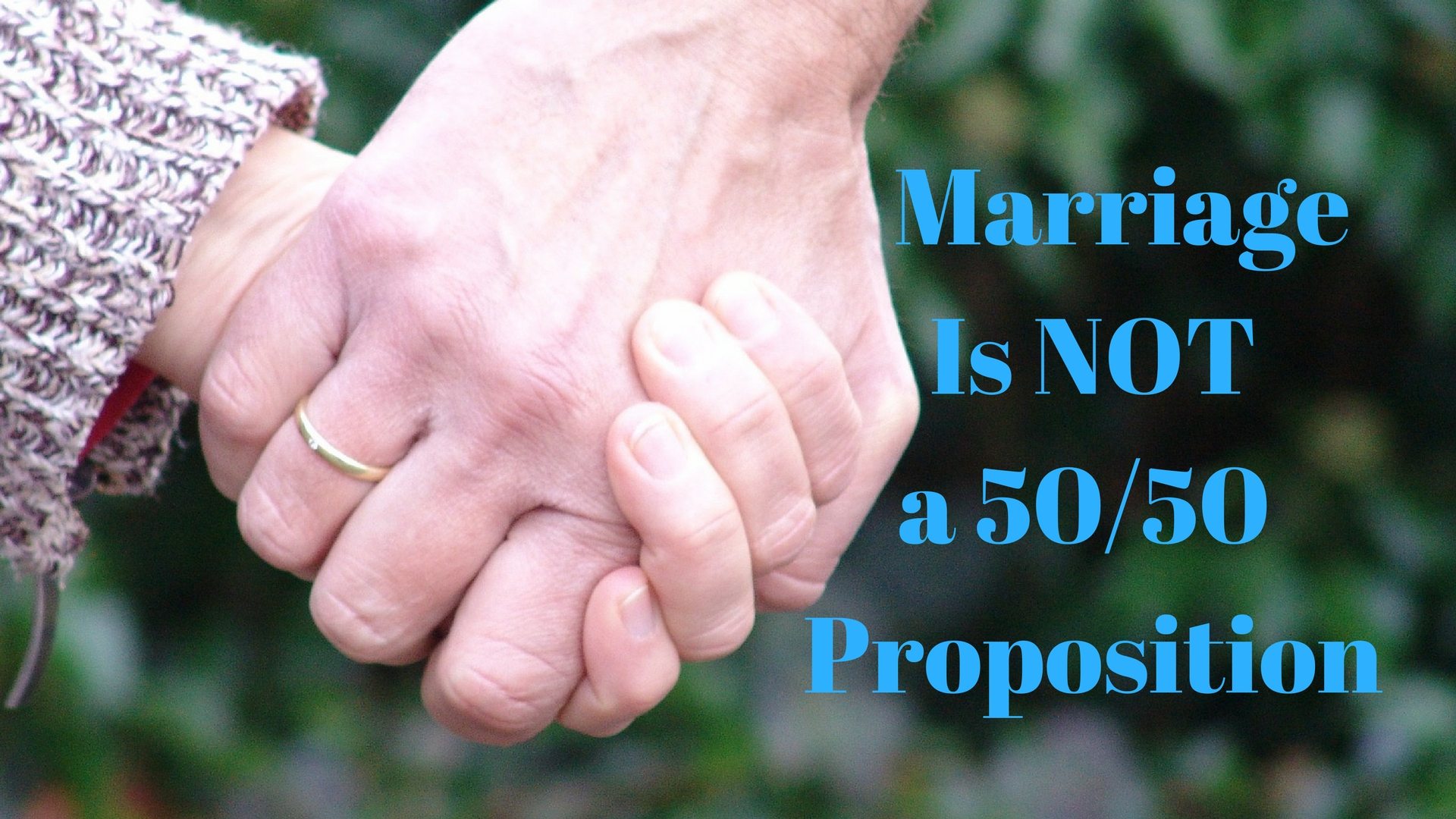 Have you heard (or said) the statement, “You scratch my back, and I’ll scratch yours?” Or, how about the statement: “Marriage is a 50/50 proposition where each partner comes half way to make things work?” We have. We’ve actually said them in the past (our distant past). But we’ve learned a lot different since then.

Wouldn’t it be great if marriage truly did work out as a 50/50 partnership? If it was, most of us would be all too pleased to sign up for that proposal. But in reality, marriage usually doesn’t work out that way. Many times it’s lopsided as far as one spouse putting more effort into making the marriage work (at least for a time) than the other does. And then many times it flip flops in the other direction. The other spouse puts in more of the effort.

If you have a marriage that functions well on these principles, then you’re one of the rare ones. That’s because eventually, something comes along in life to mess up the equation. And then what do you do? Is this really the biblical principles the Bible talks about?

Throughout the Bible we’re told to “go the extra mile,” “serve one another,” “die to self,” and “submit to one another.” We are to “do nothing out of selfish ambition or vain conceit but in humility consider others better than yourselves.” So when you put the 50/50 proposition up against what it says in God’s Word, you can see that there’s no 50/50 equation involved.

To consider this further, the following are a few statements that we gathered from different resources. Please prayerfully consider them as you read each one. They are ones we agree with, and hope you will too.

“Many couples enter into marriage with a 50/50 mindset, whether they recognize it or not. And at first glance it looks like a reasonable system: the husband and wife each give half, compromising their efforts, responsibilities, and needs so that they meet in the middle. He takes care of the trash and house repairs, she handles the dishes and the shopping. Or maybe she gets up early with him to make his breakfast before work, and he lets her pick what movie to watch that night.

“The 50/50 split appeals to many couples because it is fair, it attracts us because it makes a relationship equal. But the truth is no one ever really gives their half. We may think we’re giving our 50%, and our spouse thinks he/she is putting forth the same. But instead we both offer more like 30% and suddenly there’s a gap in our marriage. We keep a tally of the ‘selfless’ tasks we’ve done for our spouses but we are blind to the extra miles they have gone for us. We begin demanding that they give their half, convinced that we deserve it. And instead of ‘meeting halfway’ our giving becomes conditional…” (Stephanie Smith from the Iamhusband.com web site article, “Marriage is Not 50/50”)

Here’s another thought to consider:

“It is impossible to determine if your spouse has met you halfway. Because neither of you can agree on where halfway is, each is left to scrutinize the other’s performance from a jaded, often selfish perspective. Many times in a marriage, both partners are busy, overworked, and feel taken for granted. The real question isn’t, ‘who faced the most pressure that day?’ the important issue is, ‘how do you build oneness and teamwork instead of keeping score and waiting for the other person to meet you halfway?’” (Dennis Rainey from the Familylifetoday.com article, “Super Glue Your Marriage.”)

“The 50/50 marriage concept creates unrealistic expectations. You’re going to be living with this person for years, decades even! The notion that every step along the way will be divided equally in half is unrealistic, at best. At some point along the way, your partner will fall. Maybe they’re sick or they’re depressed, or maybe they’re just plain exhausted, and can’t maintain their end of the bargain. When you’re expecting that they also put in their half, you’re setting yourself up for disappointment, which will translate into a rift in your marriage.

“…The 50/50 marriage concept paves the way to deeper marital issues down the road. Expecting 50% from your spouse, leads to an inevitable tallying system. I do A, B, and C, and they do X, Y, and Z. This sounds reasonable, of course. But the next step is I’m not doing A because they’re not doing X. They’re not holding up their end of the bargain, so why should you?! Well, because the marriage is not about you. It’s about making things work. That mindset puts you at a stale-mate, whereby nothing is getting done. Tallying, score-keeping, and blame have no place in a marriage. No one ever wins.” (Michelle, from Thegraciouswife.com article, “Marriage is Not 50/50”)

“A 50/50 relationship implies that you are keeping score of every deed you do. Everything I did in the marriage I expected him to reciprocate in some way. So if I cleaned out the kitchen one morning, I expected him to do the same. This created a ‘you owe me’ attitude (by yours truly), which eventually translated as me being angry.

“There were times when he would come home from working 12 hours; would I really expect him to cook dinner because I did the night before? Absolutely not. Or what about days when he cleaned out my truck; would he expect me to clean out his? No! We just understand that we do as much as we can for each other without a record of doing. A relationship is not about keeping tabs. It’s about helping your partner in areas they are weak in.” (Franchesca Warren from the Blackandmarriedwithkids.com article, “Four Reasons a 50/50 Relationship Just Isn’t Possible”)

Marriage is About Teamwork

“When we are focused on each doing only our own half we are centered on where my job ends and hers begins. But marriage is about teamwork, and what team ever got anywhere with the players only giving fifty percent? If we want to succeed in marriage, both sides have to give it their all, all the time.” (From the Iamhusband.com article, “Marriage is Not 50/50”)

Here’s another way of looking at our teamwork:

“A 50/50 relationship may seem like a fair deal, but it can sell your relationship short. Giving 50% of your heart won’t cut it; if you put that little in, you’ll never recoup your investment. Scary as it sounds, to win at love you have to go ‘all in.’ Occasionally, this reward structure doesn’t work. Someone takes advantage of our generosity or fails to honor an important debt. When that happens, it’s tempting to become miserly with our relationship assets.

“We may withhold compliments, assistance or affection. Generally, it’s not greed, but fear, that motivates this response. We’re afraid of losing, of getting taken for all we’re worth. In order to do a relationship well, however, you can’t think in terms of subtraction or division. Love operates instead by the laws of addition and multiplication: Two individuals, by each committing to the relationship with their whole heart, can produce something even greater.” (From the Twoofus.org article, “Are 50/50 Relationships Bad Math?”)

Our Motivations are Important

“The ’50/50 Plan’ says, ‘You do your part, and I’ll do mine.’ This concept sounds logical, but families who use it are destined for disappointment. Among the problems with ‘The 50/50 Plan’ is that giving is based on merit and performance. We focus more on what the other person is giving than on what we are doing. Love is withheld until the other person meets our expectations. Since this way of measuring out our love is subjective, the motivation for our actions is based merely on how we feel.” (Dennis Rainey, Crosswalk.com article, “The Trouble with the “50/50 Plan”)

“We have to get over this idea that we each put in half the effort, and think of marriage more like 100/100. We each jump in and dedicate ourselves to making the marriage great. The more you do that, the more benefits you’ll receive. One woman wrote: ‘Marriage isn’t always a 50/50 deal. Most days it is 60/40 or even 80/20. It all depends. BUT being married means meeting that other person wherever they are at that time. The more you tend your marriage the more it will flourish. You absolutely need to be totally selfless at times for it to work. It took me awhile to realize this and now that I do my marriage is the best it has ever been.'” (Sheila Gregoire in the Tolovehonorandvacuum.com article, “10 Things I Wish I Knew Before We Got Married”)

What about fairness and equality?

“The problem with holding up fairness and equality as the main measuring sticks for a good marriage is that it turns what should be a partnership into a contest. Scorekeeping soon becomes the major pastime of the relationship.

“…Unfortunately, when you constantly fight for your part of the marital pie, pushing for your rights, agendas, fair share and expectations, you end up hurting your marriage. Even if you win, you actually lose. You lose intimacy in your relationship. You lose the joy of giving freely to another. Plus, you lose the delight found in simply delighting the one you love. And you lose the atmosphere of respect and honor in your marriage.” (Scott Means)

Dave Willis gives a great perspective on this:

“Instead of marriage as a 50/50 compromise, God’s plan for marriage reflects a sacrificial love in which 100/100 is the goal. Here’s the difference:

The Picture of a Biblical Marriage

“Marriage is different from a friendship. When you get married, you make a vow to God that you will remain committed to each other, no matter what. And if you try to keep a relationship like that going with the 50/50 plan, it doesn’t work. … With the 100/100 Plan, both husband and wife are willing to step in and do all the work. At home, both are willing to get the chores done. At the airport, both are willing to care for a fussy baby.

“The 100/100 Plan allows for the inevitable trials and difficulties that any couple will encounter during the different seasons of life. It keeps a family going when one spouse is sick or injured, or working odd hours, and is therefore unable to contribute as much. It allows for the richness of a relationship in which each spouse complements the other because of differing strengths, personalities, and abilities. In short, it’s the plan that provides the best picture of a biblical marriage.” (Dave Boehi “Why the 50/50 Plan Won’t Work in Marriage”)

“Ultimately, the world’s plan, the 50/50 performance relationship, is destined to fail because it is contrary to God’s plan. What a marriage needs is the Super Glue of Philippians 2:3: “Do nothing from selfishness or empty conceit, but with humility of mind let each of you regard one another as more important than himself.” It’s what we refer to as the 100/100 Plan, which requires a 100 percent effort from each of you to serve your spouse.

“The Bible describes this plan well in Matthew 22:39: ‘You shall love your neighbor as yourself.‘ There’s no closer neighbor than the one you wake up to each morning! And since most of us love ourselves passionately, we are well on the way to implementing the 100/100 Plan if we take a similar approach to loving our spouses.” (Dennis Rainey, from the Familylifetoday article, “Superglue Your Marriage”)

Also, to learn more about proceeding in your marriage as a marital team please read:

We hope this helps and pray this message ministers to your marriage.