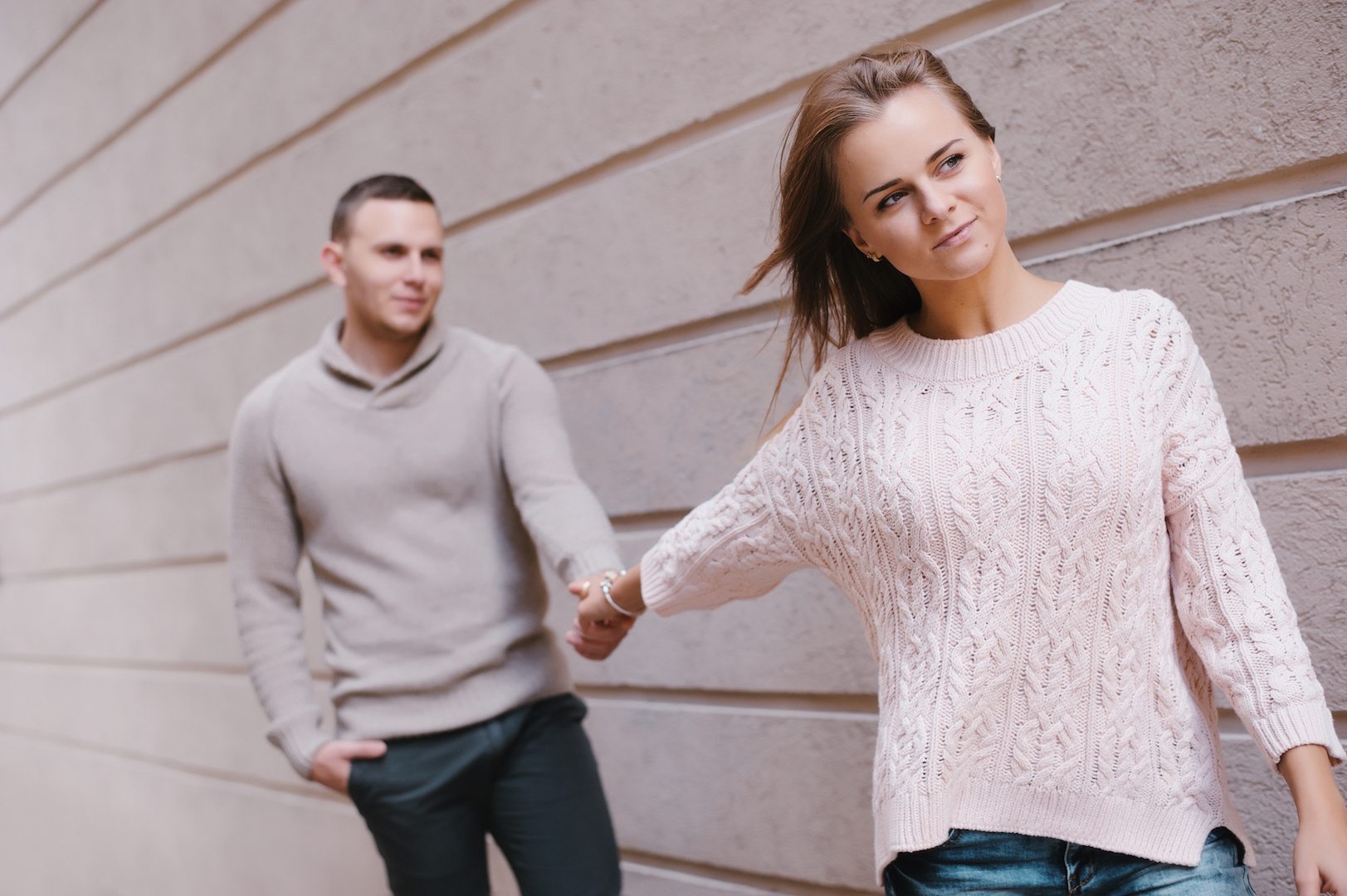 It is the basic nature of a man to assume the lead —to be a do-er. Immediately, you may think of many men who are passive. For these men, passivity can be a means not of leading but of control or manipulation. It is what is known as passive-aggressive behavior.

This trait often emerges in a man when his confidence has been badly shaken. Or it could be that his masculine self-image was wounded at an early age. Recognizing and understanding passive-aggressive reactions will allow a wife to more effectively minister to her husband. It could also help her to survive the intense frustration of life with a man who withdraws because he is unsure of himself.

There are two parts to handling the problem of a withdrawn man. The first is to commit yourself to the process of helping him emerge into his God-given role. And the second is to build for yourself a strong relationship with the Lord from which to draw strength while the emerging process is working.

How does a wife enter into the process of helping her “withdrawn man” come out of himself? The first part of her task is to build the skill of “active listening.”

Most of us assume that communication involves talking. But it also requires listening and looking. Women are notoriously good listeners —at least during courtship. But many times, this crucial skill is lost and forgotten after marriage.

True listening involves far more than waiting to talk. It involves picking up clues in an attempt to understand the reasons behind what is said and what is left unsaid. Often, a wife is at loss for what to say to a husband who is silent. Many ask, in frustration, “How do you listen to a stone?” You don’t. But neither do you try to forcefully penetrate a stone by talking at it.

A wife can, however, show her husband that she cares what he’s going through. And this can be done non-verbally in as many creative ways as you can imagine.

She can approach her silent husband, who has slouched in an easy chair, with a snack and the evening newspaper. She can stand quietly beside him, rub his neck and communicate without speaking “I love you. You’ve come to the right after a tough day.”

This can work in reverse, too. Instead of telling her stone-silent mate about all the pressures of her day —which will likely drive him deeper into removed silence and the wife deeper into frustration —she can try this: “Honey, I’ve had a rough day. Would you massage my shoulders and help me relax?” If you cannot get a listening ear, you can at least have the comfort of his warm, relaxing touch.

Many women wrongly assume that their withdrawn man is so confident in himself that he is withdrawn in silence because he doesn’t need her at all. This is often a very wrong assumption. In fact, he may be withdrawn because he has had his confidence shaken, has seen his dreams shattered, or has spent his day feeling defeated. As a result, he needs a safe place to go, and home should be that place.

Home has been called “the spot where when you go, they have to let you in.” Many times, however, a man sees his home only as a location filled with more pressure. If he has been defeated, he’s not thinking of what his wife has faced all day, nor does he see the many roles she fills. His vision shrinks to the minute size of his own life. He’s left staring at the rubble of his shattered dreams. He sees his goals and his happiness slipping through his grasp.

Yes, it’s true that you may have had the challenges and defeats in your day, too. But the fact is, seizing your husband by the ear the moment he walks in the door is not the way to gain his eager attention. If you learn the approach of active listening, however, you are more likely, later, to get the attention you need as well. But what do you listen for?

What Is He Running From?

The desire to escape pain is a tremendous motivator for many men. For a man, one of the greatest sources of inner pain is the lack of success or outright failure.

Recently, in an interview on a news program, the race-car driver Danny Sullivan was asked, “When you’re in that car, what do you fear most?” You might reasonably expect him to reply, “A crash,” or “A fire.” But no. Like many men would, he said, “Failure. I cannot stand to lose!”

Even men who have a strong belief in God are not immune from this male trait.

The prophet Elijah might be an example of a man who experienced depression and a paralysis of will because of a failure. In 1 Kings 18, we read that Elijah defeated the prophets of Baal. But at a time when one might expect this great man of God to be on top of the world, he made a mistake: He ran when his life was threatened.

We read that “he went a day’s journey into the wilderness, and came and sat down under a juniper tree; and he requested for himself that he might die. He said, ‘It is enough; now, O Lord, take my life, for I am not better than my fathers'” (1 Kings 19:4).

A Christian woman may think that her husband’s beliefs should erase his human, masculine weaknesses. But given an even that shakes his confidence, a man’s first response will be to escape pain just like Elijah.

Unlike the prophet of old, the Christian husband has a wife and family who, hopefully, are committed to seeing him overcome human weakness.

There can also be another side to the withdrawn man. When he isn’t immersed in silence, he may be demanding and critical. Having lost the battle in his working world, he may turn his attention to the one place he still seeks to prove his dominance—his own home.

One of the obvious first signs is that he’ll become less and less considerate. He’ll contribute little effort to help with the chores that make the household function. Then his wife points out his shortcomings as a husband, a father and a Christian. The more she communicates a lack of respect for him, the sooner he’ll decide that home is just another place filled with hard knocks. This produces a downward spiral with results that can be devastating.

Another sign that a man feels his failure has thrown his life “out of control” is that he will take only “safe” tasks. Why should he attempt something that carries with it the uncertainty of risk? Therefore, some men will pull back from activities over which they don’t maintain a high degree of control, or in which they aren’t certain of success.

The complexity of today’s world often freezes people between choices. When a man finds himself at a crossroad in life, he may believe it is actually wise not to act at all. He then becomes glued in his tracks to indecision. In his desire to do the best thing for himself, and the perfect thing for his dreams, he does nothing.

If he’s employed in a job he dislikes, he may remain so. He may desire to wait for the perfect moment to switch. Meanwhile, his dissatisfaction and emotional withdrawal from his family continues.

The actions—and more importantly, the reactions —of a woman whose husband is undergoing a crisis are critical. It doesn’t help to say, “My husband knows the Lord. Why doesn’t he just pray?” The facts are that Christ has given each of us a ministry, and the wife may be the only expression of God’s love that her husband can see during his most trying times!

Now, I’m not suggesting that a woman should overlook or ignore her own needs when trying to help her husband out of time of emotional withdrawal. In fact, while she’s learning to listen and to wisely communicate her love in practical ways, she must not neglect her own emotional and spiritual needs.

Only by learning to press on in her relationship with the Lord will a woman be able to handle her own pain, which will merely compound the marital stress if allowed to churn out in negative words and reactions. The path to helping her husband and, therefore, ultimately helping herself, starts with her own walk with the Lord.

The Path to Peace

Often a woman marries believing her deepest needs will be met in the relationship with her husband and in the family and home that promises to be hers. There’s that tendency in each of us, men and women alike, to view our spouse as someone pre-designed to meet our own needs. But only God himself can satisfy the longings of our heart.

If a wife is to have a major impact, she must ask God for the wisdom to help her to focus her husband on hope.

There are several creative ways she can work on this task:

1. Begin to keep a prayer diary of little things she is praying for in her devotional time. Keeping track of the ways God is answering prayer will also bring hope.

2. Acknowledge that even the things her husband is now doing to avoid responsibility as having potential future value. (For instance, a wife whose husband is a good mechanic could say, “You’re such a great mechanic. It makes me feel safe to drive around in a car I know you’re looking after.”)

3. Find something he has done in the past that is paying off now. Compliment him. (“I’m grateful you built that barbecue. We’re getting so much good use out of it this summer.”)

If these simple steps are undertaken and continued patiently as a ministry, a wife may show her husband that she believes in his future and his worth, even if he does not. This can be done without sounding “preachy.” More importantly, she needs to be involved in encouraging her husband in a way that will give her hope as well.

Include as a part of your personal prayer list this daily request: “Lord, let me catch him doing something right today—anything!” Thanking him for the smallest deed as soon as possible can be a positive reinforcement.

As newfound confidence develops, your husband will be a happier man to live with.

This article comes from the book, Husbands Who Won’t Lead and Wives Who Won’t Follow. It is written by James Walker, published by Bethany House Publishers. This book goes into much greater detail to help you understand your spouse, marriage, and your expectations for each other. It is a very practical, insightful book that can help husbands and wives find a balance of roles.

70 responses to “When Men Fail To Lead”