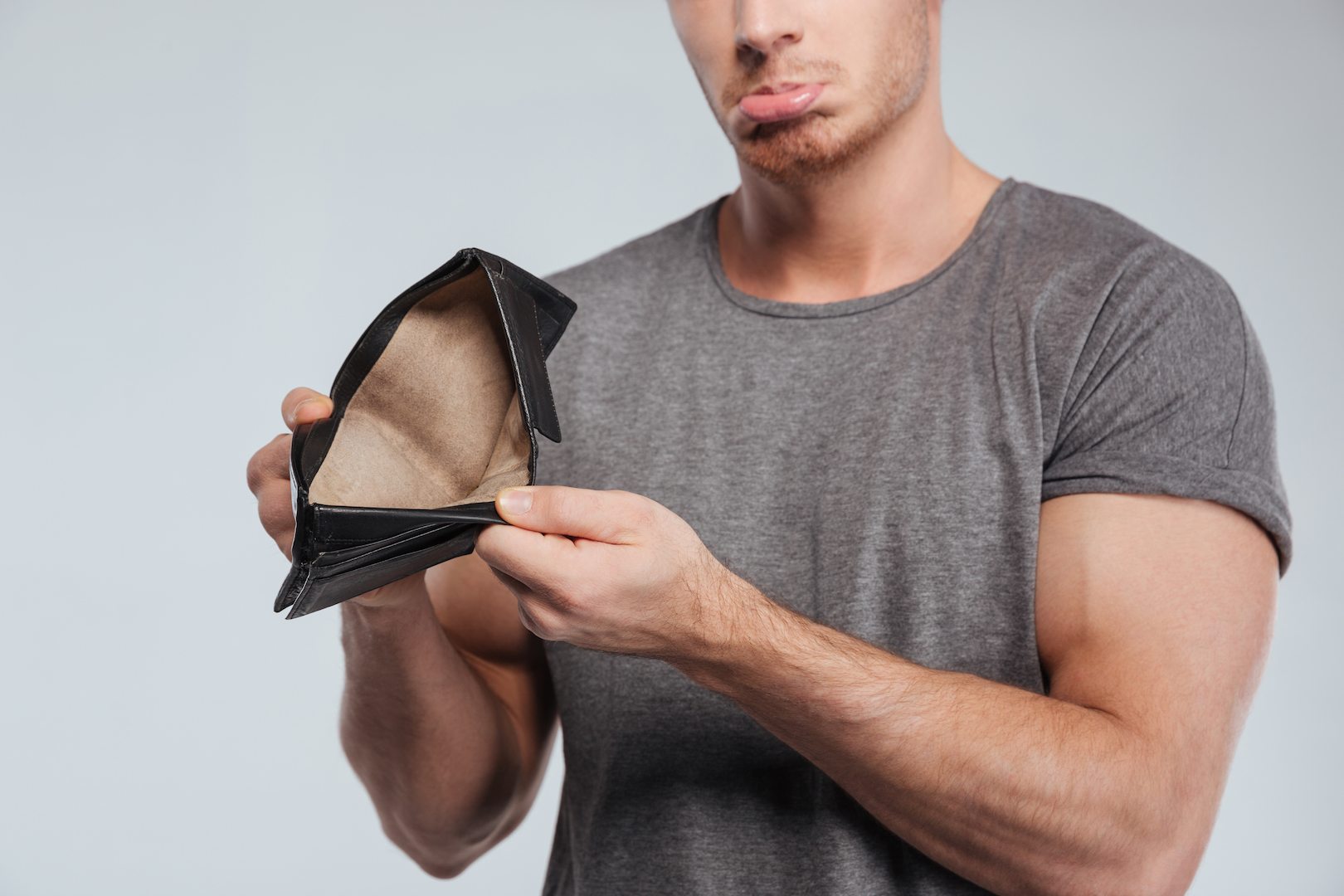 There were so many things Nancy Foster loved about her husband when they were married in 1978. Not only did he appear to have a mature faith in Christ, but he also was funny, creative and outgoing. He was like “a party waiting to happen.” What she didn’t know was that the very qualities she loved would prove to be destructive when applied to handling their finances. He was a free spirit —if you have it, spend it. This caused him to be broke a lot of the time.

He had a checking account but didn’t know how to manage it. Often he wrote checks without knowing the balance in the account.

By contrast, Nancy kept a detailed budget and knew where every dollar went. She worked as a nurse, and lived frugally. “I bought little for myself, and I put most of my money into savings,” she says. “I was saving for specific things.”

The Disaster of Being Broke

It was a recipe for disaster. And since they married only nine months after they met, they were unprepared for what happened. “During engagement you’re still very well-behaved and you don’t understand how you’re so different in all your thinking and spending,” Nancy says. “I never really knew what kind of a spender he would be.” Unfortunately, it took eight years of frustration and isolation before they finally could take no more.

Jerry believes that handling finances is one of the most practical ways we can live out our faith here on earth. “It is so integrated into everything we do. It tells everything about us.”

So when Jerry looks back on those early years of his marriage, he recognizes that how he handled his finances was just one symptom of a bigger problem. It was the lack of spiritual discipline in his life. “It’s a barometer of the fact that I wasn’t walking closely with God during that time.”

Yes, he was vitally involved in his church, he led Bible studies. Plus, he met regularly with good friends who encouraged him in his faith. But he wasn’t spending time regularly with God. He wasn’t planning for the future.

After their wedding he and Nancy moved to his hometown Des Moines. There he expected her to fit in with his lifestyle, his church, and his friends. “I would go off and play softball or basketball with my friends. And I’d bring them back and expect Nancy to take care of us. I was doing my own thing, making my own decisions, and she wasn’t part of it. She was very isolated, dealing with a very irresponsible husband.”

Nancy found it difficult to manage a budget when her husband would make purchasing decisions without consulting her. He wanted to landscape their yard, for example. And a friend convinced him to purchase railroad ties, dozens of plants, and create a beautiful three-tiered backyard. He never gave Nancy the opportunity to tell him they couldn’t afford it.

Jerry couldn’t understand why Nancy was so upset by his behavior. He thought she was a nag. “I didn’t see I was making any mistakes,” he recalls. “I thought she had a real problem with anger.”

Within a few months of their marriage, they would lie in bed at night thinking, “How did I get myself into this mess” How can I get out of this thing?”

Only nine months after their wedding day, Nancy attended a class at a local church on renewing the love in marriage. The other women in the group, each of whom had been married for a number of years, were surprised to find a relative newlywed in their midst. They took her on a class project. One of the best pieces of advice they gave her was to write a list of all the things she didn’t like about Jerry. And then she was to give them to God. “I wrote down 14 things on my list,” Nancy says. “I decided to pray about those things instead of telling him about them.”

Nancy prayed faithfully for God to change her husband. She also tried to avoid nagging him. But as the years went by she grew discouraged when his behavior wouldn’t improve and their financial pressures gradually grew more acute. By 1983 their income had gone up, but so had their spending. They seemed caught in a downward spiral. “I would call out to God, ‘Why aren’t You making it better?'” she says.

Not until 1986 did Nancy begin to see some answers to her prayers. Says Jerry, “We reached a point where we were broke. We were broke financially as well as spiritually and emotionally. I was just ready to give up. We both were.

“It must be a spot that every marriage hits somewhere along the line. Unfortunately, that’s why a lot of them end.”

But that’s when Jerry and Nancy made a different choice. In their minds, they could see nothing but failure if they continued on their present path. So they both decided to surrender their lives again to the Lord. “It was through that feeling of brokenness,” Jerry says, “that God was able to have His way with us.”

They also attended a financial seminar led by Larry Burkett (from Crown.org). There, they heard about Biblical principles for managing their money. They learned, for example, about their need to recognize that God was their provider. God had given them stewardship over a section of His resources. Their responsibility was to manage those resources in a way that would glorify Him and promote His kingdom.

The Need for Financial Responsibility

He and Nancy started analyzing what they were spending in different categories. They wrote up a detailed budget Nancy worked off a cash (envelope) system for household expenses. Then they decided each could only have a small amount of pocket change each week. Their entertainment fund eliminated Jerry’s lunches out. And it provided for only a few date nights out together. They also listed all their debts and set up a plan for eliminating them. At the end of the first month of controlled spending, they even had money to put away for saving.

As Jerry began saving, and living according to the plan, Nancy began to trust and respect him more. “That was something I hadn’t had for him in many years —trust and respect. That was a real turning point for our marriage.”

They were so serious about obeying God in managing their money that they decided to sell their home. A friend offered to let them live rent-free in an old, decrepit house he owned. “We were willing to do whatever it took to pay off debt,” Jerry says.

During this process, though, something happened that the Fosters consider a miracle. Late one afternoon, Jerry was working alone at his office (he sold insurance) when a stranger walked in. He purchased a huge life insurance policy. Jerry’s commission from the sale was quite large. With that money they were able to pay off some debts and take their home off the market.

“I want to be careful in how I say this, because not everybody has the same experience,” Jerry says, “But I think God was looking for us to be obedient to Him, and then He chose to bless us. Not that we haven’t had struggles since then, but the albatross was taken off our necks that day.”

Jerry Foster’s turnaround in financial responsibility was so dramatic that he actually started his own financial planning business in 1989. And then he spent several years obtaining the designation of certified financial planner. By the end of 1999 he had 10 employees with plans to hire at least two more. There is no logical explanation for the way God is blessing us today,” Jerry says, “other than it’s a God thing.”

In his business Jerry has the opportunity to counsel many young couples who are facing the same problems that nearly destroyed his marriage. “I think my generation was the first that didn’t understand that principle of living within our means,” he says. “We live in a society with an inflated idea of what’s normal. People have high expectations of how we ought to be living. Young couples think they need to start out in nice homes, establish a certain lifestyle in order to create the right image. I see people in their 20s and 30s now who are so taken in by this. I’m scared of what that’s going to mean for the next generation.”

As painful as his experience was, Jerry believes it was God’s way of disciplining him. “I believe God disciplines us for a purpose. I don’t think I would be in the career I’m in if it hadn’t been for that lowest point in my life. We may have no clue about why we are experiencing what we’re experiencing, but He knows the last chapter of the story.”

If Jerry has any doubt about how God has changed him, Nancy provided further confirmation recently when he asked her how he could improve as a husband. Just nine months into their marriage she had listed 14, but now she mentioned just two sources of frustration.

As Jerry finished writing down her response, she said, “Wait, I’m not done yet. Now let me tell you thing things that you’re doing right, that I love about you.”

She spent the next half-hour praising him for the positive character qualities in his life. And when she was done there were 10 items on a new list that symbolized a life and marriage that had been reborn.

This article comes from the book, “I STILL DO: Stories of Lifelong Love and Marriage (which is no longer being published), written by David Boehi, published by Broadman & Holman Publishers. It tells the testimony of couples who have been successful in building marriages that last for a lifetime. “I Still Do” offers encouragement to couples by calling them to “finish the race” and remain committed to marriage.