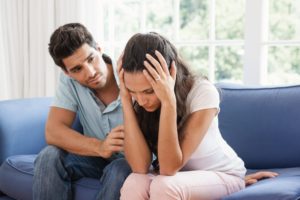 “This is not fair.” And it probably isn’t. If you’re talking about things that happen in life within this fallen world —you won’t find fairness.

Right now, my husband Steve and I are going through some things with family, which just don’t seem fair. Among them is the fact that we have a son and daughter-in-law and two precious grandkids that are living on the other side of the world. We miss them more than words can describe. Yes, there are other things in life, which are worse —we get that. But it doesn’t dismiss the ache we feel in our arms to be able to personally hug and hold them. We long to attend important events with them and be there when we’re needed. And yet… it is what it is.

And right now, my brother is dealing with life-threatening medical issues, which we are very prayerfully working through, to the best of our abilities. It is anything but easy. (I wrote a little about this in past blogs, “Heroism in Marriage,” and “The Will To.”)

Not Fair, and Overwhelmed

Sometimes I fall into bed and cry because I’m so overwhelmed by it all. My brother’s lifestyle choices led to his failing health. And yet it effects us, as well, in HUGE ways. This is NOT FAIR at all! (We warned him of what would happen if he continued to live as he did. He continued, and we are all paying a price.)

But I’m thankful my brother is alive and that I have a husband who has been supportive in his care. I lost my other younger brother to lifestyle choices a number of years back. I sure don’t want to lose another one. So while all of this is so very difficult and it is not fair on various levels, we’re dealing with it by God’s grace. It’s something that brings tension into our married life. And yet by God’s grace, we are not divided in what we need to do. We’re working it out as best as we can.

Other Issues are Not Fair

And then there are other issues in our own marriage, which we have to deal with —some daily and some at various times. Dealing with Steve’s Diabetes and heart issues, my health issues, heart breaking family issues, and just the give and take that is required in marriage, seems like it is not fair sometimes. But we’ve learned that whether some matters are fair or not, we need to quit complaining. Instead, we need to find ways to best deal with them. (We don’t always do it perfectly, or even close. But we’re failing forward, nonetheless.)

When you’re talking about matters of marriage, you won’t always land on what is “fair.” It’s what happens when two sinners join life to live it together. And then when you add other “sinnerlings” (children, grandchildren) into your family, life gets tipped on its side even more. There is much that can seem to be not fair, to say the least.

I came across something that Dr Bob Burpee wrote in a Nationalmarriage.com article titled “Marriage is Not Fair.” I believe it could give a little insight into this matter of “unfairness” and marriage.

“It is not an even playing field when it comes to marriage. Some of us just simply have more challenges than others.

“Rather than the unfairness being a cause for despair, its reality can set us toward personal discovery and empowerment. If I wallow in the self-pity of, ‘This shouldn’t be so hard, why does love have to be so hard, shouldn’t it be easy?’ I won’t ever free myself from the bondage of being a victim of my circumstances, injustices, and past hurts.

“If on the other hand I see the opportunity to leverage what I do have, what I do know, what I can accomplish, I may begin to experience progress that is rewarding and fulfilling, inspiring more effort and confidence. We don’t all have everything we think we need. But we all have something we can use to go forward.

“Ultimately, this is probably what separates couples who grow and get stronger from those who falter and despair. Growing couples leverage what they have and are acquiring, as well as celebrating their progress along the way. The faltering couples succumb to the lie of helplessness and despair.”

I hope that despite whatever you are encountering in your life and in your marriage, and the “unfairness” of it all, you are able to somehow find ways to grow through it and join God in bringing some type of light into a dark situation.

I’m reminded of some things that Paul Tripp wrote in his book, What Did You Expect?: Redeeming the Realities of Marriage. You might want to consider them as you try to deal with the unfairness you encounter sometimes in your marriage.

“God is in control not only of the locations in which you live, but also of the influences that have shaped you as a person. He has not only written the story of you and your spouse and determined that your stories would intersect, but he has controlled all the things that have made you different from one another.

“As you struggle, you must not view your marriage as bad luck, or poor planning, or as a mess that you made for yourself [although any or all of this could contribute to what is happening to you]. God is right smack-dab in the middle of your struggle. He is not surprised by what you are facing today. He is up to something. [The question is, will you participate with Him in this, or fight against Him?]

“…God is working to rescue you from you. He is working to deliver you from sin, and to form the character of Jesus in you. Marriage, the world’s most long-term and comprehensive relationship, is taking place in the middle of sanctification, the world’s most important unfinished process. Why would God do this? Hasn’t he gotten the proverbial cart before the proverbial horse? Well, the reason this doesn’t seem to make sense to us is that our purpose for marriage tends to be different from the Lord’s. We’re just not on God’s agenda page.

Is it? Are the challenges you’re going through right now ones where you are growing in healthy ways? The choice is up to you and up to us, as far as how we deal with unfairness. We can either make choices to find ways to grow and overcome. Or we can grumble and fall backward in our growth as followers of Christ.

I’m reminded of Eric Liddell (the man who won an olympic race and was featured in the movie, “Chariots of Fire”). In a race he ran before the Olympics, Eric was a strong favorite to win the 440 yard dash at the 1923 Triangular International. However, 15 yards after the start, he laid sprawled across the track infield. He was the victim of an intentional tripping incident.

At that point he had a decision to make, to give up or to finish the race. Eric decided to pick himself up and resume his race. With the finish line drawing near, Eric Liddell drew upon his upmost reserves. In the end, he crossed the tape 3 yards ahead of his nearest competitor… the man who tripped him.

Now of course, not all endings are as glorious as this one. But the biggest point isn’t whether Eric won or not, but rather what he did when he was faced with defeat. He suffered the loss of a dream that he worked so very hard at —one that appeared to be sabotaged. Eric could have laid there and cried and screamed “foul.” That is something we would have thought he would be justified in doing. But instead, he reached within and grabbed onto the courage to “finish the race.” Thankfully, he did it well.

That’s what I’m suggesting. Ask God to show you how to proceed from “this day forward” “reaching forth” so you are able to “press on” in your life. Press forward, looking for what God wants to do now and in the future.

Life is unfair, but even so, we can still live victoriously.

We are told in God’s Word:

“Therefore, since we are surrounded by such a great cloud of witnesses, let us throw off everything that hinders and the sin that so easily entangles. And let us run with perseverance the race marked out for us, fixing our eyes on Jesus, the pioneer and perfecter of faith. For the joy set before him he endured the cross, scorning its shame, and sat down at the right hand of the throne of God. Consider him who endured such opposition from sinners, so that you will not grow weary and lose heart.” (Hebrews 12:1-3)

Tagged: marriage not fair, this day forward, unfairness in marriage

One response to “This Is Not Fair”