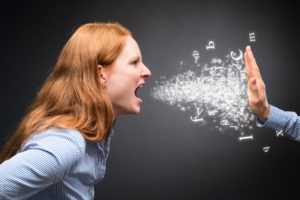 Have you been on the receiving end of poisonous putdowns from your spouse, through words he or she has thrown at you? Have you thrown verbal assaults at your spouse? God warns us in the Bible:

The Effects of Poisonous Putdowns

Poisonous putdowns, certainly don’t do much “building” up in a marriage. And they sure aren’t beneficial for those who listen. It doesn’t matter if you’re on the receiving end of them or you’re a bystander (such as your children). “Hostile putdowns act as cancerous cells that, if unchecked, erode the relationship over time.” (Cliff Notarius) If this is happening in your marriage, change is needed. This is toxic behavior and it needs to stop.

“Words are like seeds. Once planted in your mate’s life, your words will bring forth flowers or weeds, health or disease, healing or poison. You carry a great responsibility for their use. As Proverbs 18:21 warns: ‘Death and life are in the power of the tongue.’ Your words have the power to contaminate a positive self-image or to heal the spreading malignancy of a negative one.” (Dennis and Barbara Rainey, from their book, “Building Your Mate’s Self Esteem”)

That’s what we’re talking about in this Marriage Message. Poisonous putdowns—that, which one spouse can throw at another can act like a cancer, eating away at your relationship. They eat away at the marriage. And when these putdowns are flung at the other spouse, he or she pulls away emotionally from thinking that this relationship is a safe one.

“Putdowns are an expression of anger. Not only do you hurt your spouse, but being nasty ultimately boomerangs back toward you. …Ironically, when you resort to putting down your mate, you end up getting less of what you want out of the relationship because he or she pulls away.” (Dr. Haltzman, from his article, “Verbally Put Down My Spouse?”)

Relationship expert, Dr Gary Chapman addressed this topic in an issue of Marriage Partnership Magazine (now part of the Todayschristianwoman.com ministry). Hopefully, his insights below will give light into a sinful stronghold that needs to be exposed, uprooted, and thrown away. Dr Chapman writes:

Physical abuse in marriage is devastating. But verbal abuse —putdowns, blame, harsh or bitter words, profanity —can be just as destructive.

Verbal abuse uses words as grenades —designed to punish the other person, to place blame, or to justify actions —it’s a poisonous putdown that one spouse uses to make the other feel bad, appear wrong or inadequate.”

Poisonous Putdowns Are Foolish and Deadly

Below are several scriptures that tell of the danger of poisonous words:

•  “The heart of the righteous weighs its answers, but the mouth of the wicked gushes evil.“ (Proverbs 15:28)

•  “The words of the wicked lie in wait for blood, but the speech of the upright rescues them.” (Proverbs 12:6)

There is no doubt that God’s word warns against abusive words. If God takes this issue seriously, so should we. So…

What Can Be Done?

“Marilyn and Jeff struggled with this issue. Jeff would make cutting, nasty remarks if he didn’t like what Marilyn was doing. She finally came to me for counseling.

“I encouraged Marilyn to confront Jeff lovingly. Later that night after the children were in bed, she told him, ‘I’ve been thinking about us. I remember how kind you were to me when we dated: your tender touch, your kind words, and the fun we had. Sometimes, though, I lose that vision when I’m hurt by your verbal attacks. I believe that gentle, loving man —the one I married —is the man you really want to be.’

“Two weeks later Jeff exploded again in harsh words to Marilyn. Since confrontation needs to be progressive, I encouraged Marilyn to up the ante.

“Marilyn had another conversation with Jeff: ‘I’ve made a decision. I’ve explained how deeply I’m hurt when you lash out at me with critical and demeaning words. It takes me days and sometimes weeks to get over the pain. I’ve decided that the next time you lose your temper and yell at me, I’ll take some time away from you in order to recover. I’m not abandoning you. Instead, I’m trying to take constructive action. I’m sharing this with you because I believe in you and want to improve our marriage.’

“‘Your leaving isn’t going to help,’ Jeff scoffed. ‘Perhaps not,’ Marilyn said. ‘But at least it’s a step in the right direction.’

“A week later when Jeff erupted, Marilyn packed up their children and spent three days with her mother. That’s when Jeff got serious about his destructive behavior. He sought counseling and started down the road to recovery. While not all spouses will respond as quickly as Jeff, most will face reality when confronted with tough love.

“We must never allow verbal abuse ‘to work’ for the abuser. Giving in encourages that negative behavior.

We encourage you to read the rest of Dr Gary Chapman’s article titled “Poisonous Putdowns” that is posted on the Today’s Christian Woman web site. It isn’t just a woman’s article; Dr Chapman addresses both husbands and wives. But he gives several other suggestions for those caught up in this toxic behavior.

But on this same point of not giving in, Angie Lewis gives this advice:

“You need to detach with love. How do you do that? Easy! Simply walk away when he becomes verbally abusive or when he begins to disrespect you. Do not take his verbal abuse. Let it slide right off your shoulders—let it go in one ear and out the other. I realize that no sane person can actually do this, but you are going to try and do it. And eventually it will make you feel better doing it. There is no other way. You can’t make your husband be nice to you. Only he has the power within himself to change himself.

“Why let his misery control how you feel? Walk away from it. And when he asks you why you are not getting angry back or why you are leaving the room, tell him that you are not going to talk to him when he is abusive. You have to take care of your own emotional and spiritual well-being. How can you do that when you are constantly getting trampled on? Rescue yourself from the abuse. The worse thing you can do is to get verbally abusive back.” (From the Christians In Recovery article, “My Husband Puts Me Down Constantly. What Should I Do?”)

This goes with the scripture:

“If someone is caught in a sin, you who are spiritual should restore him gently. But watch yourself, or you also may be tempted.“ (Galatians 6:1)

If You Are the One Who Throws Out Those Putdowns:

“When you lose it and say hurtful things, it’s human nature to blame someone else for ‘making me feel this way.’ You, and only you, are responsible for your actions, and your reactions in marriage. You’ve got the power to make your marriage spectacular, don’t permit yourself to make it anything less than that.” (Dr. Haltzman, from the Hitchedmag.com article, “Verbally Put Down My Spouse?”)

You can find more help with this issue in the ABUSE IN MARRIAGE topic. You can find additional help in the COMMUNICATION AND CONFLICT and the COMMUNICATION TOOLS topics. Plus, to help you in this mission, you will find the many other articles we offer on this and other issues, pertaining to marriage.

Above all, remember God’s Word sets the standard for how we should conduct ourselves.

“You flood the LORD’S altar with tears. You weep and wail because he no longer pays attention to your offerings or accepts them with pleasure from your hands. And you ask, ‘Why?’ It is because the LORD is acting as the witness between you and the wife of your youth, because you have broken faith with her, though she is your partner, the wife of your marriage covenant.

May we set standards in our homes and conduct —that we personally will not break faith.