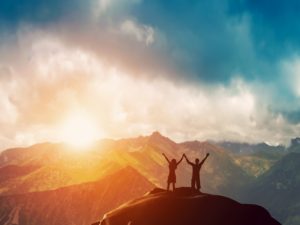 What’s it like serving God together —as a couple? What are the benefits of teaming up to have a spiritual impact on others? Is it really worth the time, effort, and inconvenience? You’ll find the answers to these questions in the stories of two couples.

The first couple, Mike and Gloria, had pretty much everything the world had to offer. Mike had an extremely good job. They had a nice home, two new cars, and a couple of healthy kids. They were living the American dream. Both of them were Christians and faithfully attended a local, Bible-believing church.

But all was not perfect in paradise. Far from it. Mike and Gloria had an ingrained pattern of bickering. They squabbled frequently and kept up a steady stream of snide, critical comments. Their inability to resolve conflicts was taking a toll on their relationship. They weren’t having fun anymore. Romance was practically nonexistent, and sex was boring. Spiritually, they had no passion. They went to church but didn’t get much out of it. They were not happy but didn’t know what to do about it.

Gloria made the first move to change things. She went to a women’s conference and came back convicted of the need to get involved in evangelism. She shared with Mike her burden to bring others to Christ and asked him to consider joining her in this new endeavor. Over the course of two weeks, they discussed it and prayed about it. Then they acted.

Serving God Together as a Couple

They joined a ministry team that called on non-Christian married couples and singles who were new to the church. Every Wednesday evening, they called on these people together. They built relationships and led others to Christ. But Mike and Gloria didn’t stop there. They also reached out to unsaved neighbors and started conversations about Jesus Christ. They began a weekly Bible study for spiritual seekers in their home. When they led others to Christ, they followed up with several months of discipleship. They couldn’t believe how much fun it was bringing people into the kingdom of God.

Mike and Gloria’s service for Christ changed their spiritual lives. They were once again excited about their Christian faith and grew by leaps and bounds —individually and as a couple. Their service also changed their marriage. They developed a level of camaraderie and friendship that they hadn’t had for years. In fact, they had never been so close. They stopped their continual bickering. The joy of bringing others to Christ —together —helped them put the love and intimacy back into their marriage.

Getting Marriage Back on Track

The second couple, Bob and Susie, also needed something to get their marriage back on track. Their communication had been poor for years. They just couldn’t seem to connect on a deep level. All they talked about was the house, their jobs, and the kids. Bob was a stick —unemotional, rational, unreachable. He didn’t like to listen to a woman talk and share a bunch of feelings and details. Unfortunately for Bob, that’s what Susie does (and most women do) in conversation. Susie wanted closeness with Bob but couldn’t get him to open up.

There were also some serious sexual problems in the marriage. Their lack of emotional intimacy led to stale, infrequent sex. A huge part of the problem was Bob’s addiction to pornography. He had rented X-rated movies for years and recently had begun using the Internet late at night to feed his lust. When Susie found out what he was doing, she was disgusted and deeply hurt.

The Need to be Serving God Together

Bob and Susie attended church and served regularly in their own individual areas. But they had never served God together. That all changed one night when their pastor asked them to temporarily fill a slot on the junior high ministry team. They reluctantly agreed, making it clear that they would stay only for a month or two. It’s been five years now, and they’re still on the team.

Bob and Susie fell in love with the junior high kids. They opened their home for youth group Bible studies, parties, and for anybody who had a problem and needed to talk. They taught these kids. Plus, they played and prayed with them. They even led a group of twenty-five youth on a short-term mission trip to Mexico. On the trip, God gave them a taste of His awesome power and incredible grace. They saw villagers hungry for the love of Jesus. They saw great poverty and great needs. But they also saw miracles. They saw God produce new spiritual maturity in the kids’ lives and in their own lives.

In Love With Jesus Again

Bob and Susie fell in love with Jesus again, and they fell in love with each other again. They expected to teach the group members a few things about God, life, and relationships. Instead, God used the group to teach Bob and Susie many things. Serving together forced them to talk about deeper issues: the kids, ministry plans, and God’s desires for the youth group. They prayed together often—for the strength to keep serving, for the individual kids and their needs, and for God to make clear what He wanted them to learn from the experience.

Their service helped Bob and Susie break through the barriers that blocked their communication. Bob began to open up and share his personal thoughts and feelings. His closer walk with Jesus gave him the confidence and power to address his addiction to pornography. He went to counseling, joined a sexual addiction group, and made real progress in defeating this problem. Susie warmed up and began to respond to Bob with a kind of love and gentleness she hadn’t shown in years. They both said that their marriage was more intimate and enjoyable than it ever had been.

Team Up For Christ

These are true stories about real people. I know these two couples personally. They have three things in common. First, they’re serving Jesus Christ together. Second, they have strong, vibrant spiritual bonds. Third, they have dynamic, growing marriages. The passion they have for serving the Lord flows into their marriages. I have learned a valuable lesson from watching their lives: You reap amazing benefits when you team up as a couple for Christ.

I could tell you stories of dozens of couples who have teamed up in dedicated Christian service. As I travel for my speaking ministry, I have the privilege of meeting married couples serving in a wide variety of ministries. These spouses are on fire for Jesus, and it shows. You can see it in their eyes and hear it in the way they talk. These folks are on to something—something big. It’s something that all of us need in our marriages.

Serving God together as a team brings you closer spiritually in a unique way. Consider Aquila and Priscilla, that dynamic duo in the early church. There are several references in the New Testament to their helpfulness and the impressive things they did in service to Christ. (See: Acts 18; Romans 16:3-4; and 1 Corinthians 16:19)

Aquila and Priscilla were sold out to Jesus Christ. They walked alongside Paul (literally and figuratively) and supported his ministry. It’s no coincidence that they are always mentioned together in Scripture. What an effective team!

Pick a Place to Serve and Jump In

One of the best places to serve God is the local church. The church is God’s chosen vehicle to change the world. It’s not so important what you do as long as you do something together. There are many different areas of service in the church. There is the nursery, teaching Sunday school (elementary, youth, adult), evangelism, discipleship, visitation, music, greeters, mentoring, and so on. Talk to your pastor, and pray about it. Ask some friends where they think you two could be effective… and then go for it.

There are also many excellent para-church and community-based ministries. They include Campus Crusade for Christ, the Navigators, Promise Keepers, Family Life Conferences, Prison Fellowship Ministries, Young Life, homeless shelters, and crisis pregnancy centers. Going on a short-term mission trip is another way to spiritually energize your marriage.

Sandy and I have teamed up in a number of ministry areas throughout our married life. For example, we taught first and second graders at our church for years. (Okay, Sandy taught. I handled crowd control and participated in the activities. But we were still involved together.) Those years we spent leading the Sunday school classes helped us build a strong and intimate marital foundation.

Together, we saw God answer many prayer requests for the kids. We saw boys and girls learn about the Bible and how to love Jesus more. We found out about problems occurring in families, and we were able to provide practical help. I remember a number of children who faced serious problems in their homes: no dad present, parents divorcing, an alcoholic parent, a mom or dad with a life-threatening illness. God used Sandy and me to make a difference in the lives of these troubled kids and their families.

It has been exciting to watch the little kids we had in our class grow into young adults. It does make me feel old when one of our former students says, “Wow, Dr. Clarke, is that you? You used to be so… so … young. What happened?” But it’s still a thrill to know that God used us as a couple to influence lives for Christ.

Joining in Ministry for One-Time Projects

Since Sandy and I have four children of our own, we can’t serve God together as much as we used to or as much as we wish we could. But we try to join in ministry at least once a year. It may be for a one-time special project. It may be to chaperon the youth group on a few outings. Or it may be to teach Sunday school or serve in the nursery for a couple months. We gladly offer what time and energy we have, knowing we’re serving the Lord and contributing to the spiritual intimacy of our marriage…

…Every married couple I talk to who serves Christ together tells me that it brings them closer in a way that words can’t describe. Being more intimate isn’t the main reason you should team up in ministry. You do it primarily to obey the Bible and please God. But a wonderful by-product is a new depth and closeness in your marriage.

This article comes from the book, A Marriage After God’s Own Heart

, by David Clarke, published by Multnomah. This book teaches men and women in a committed relationship how to pray together, create “spiritual conversations,” read and study Scripture together, hold private worship sessions, and allow the Holy Spirit to guide them. It’s extremely practical counsel all couples need today.

Tagged: marital team, mission in marriage, serving one another