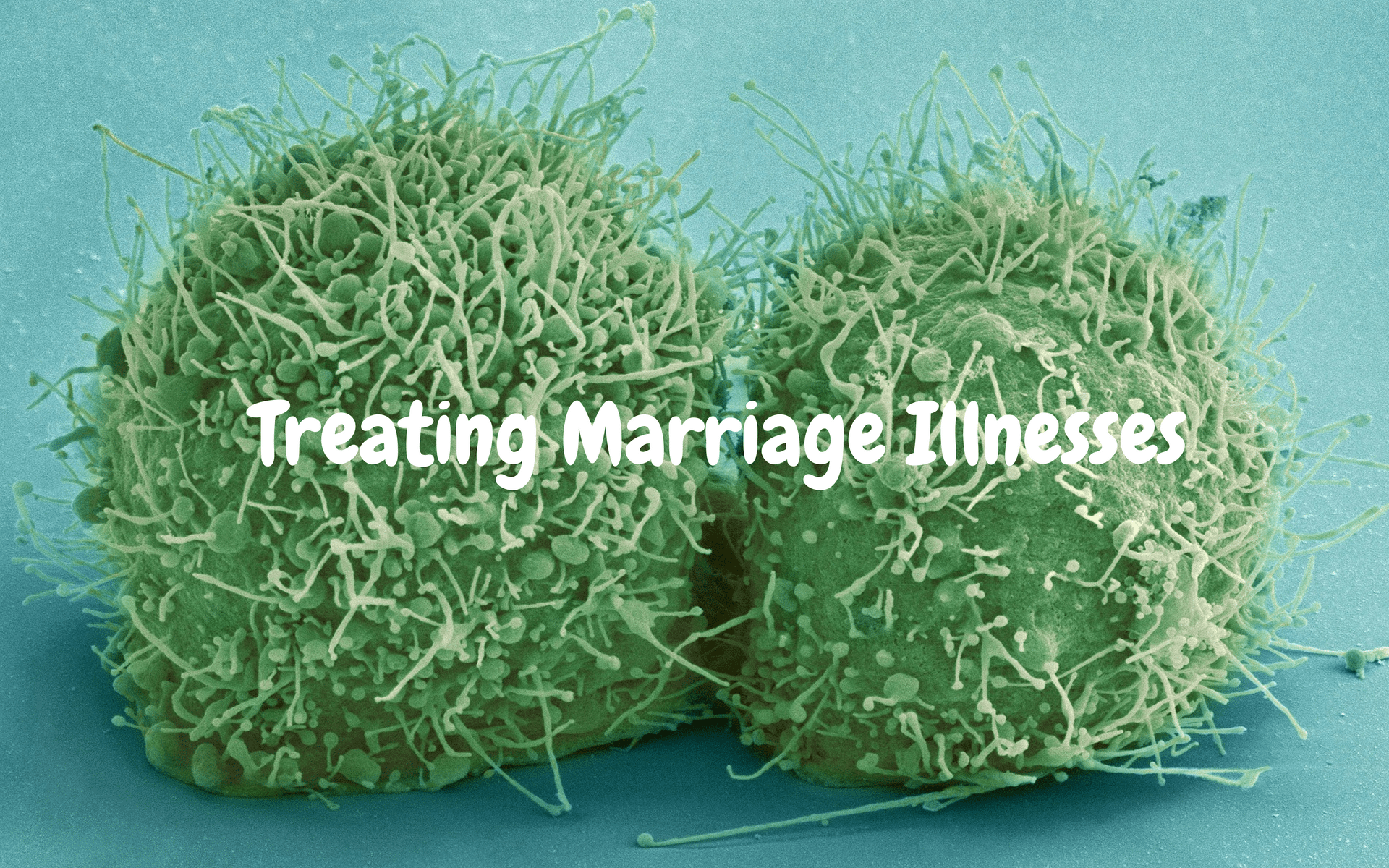 In this Marriage Message we will be sharing with you four common problem areas, which author/pastor Wayne Coggins terms as “illnesses.” These illnesses can infect even the healthiest of marriages. If they go undiagnosed or untreated they can lead to the “death” of a marriage. That’s why treating marriage illnesses is so important.

The following was featured in the book, “Lovers for Life” (which is no longer being published). It has many contributing authors. Wayne Coggins is one of them. One of the marital “illnesses” he writes about are:

I’m convinced that more marriages are in danger of anemia (tired blood) than of getting blasted apart by a surprise affair or deception. Drifting apart a little each day can leave a couple vulnerable to all kinds of problems. For a marriage to stay fresh and vibrant it needs frequent doses of fun and re-creation. [Notice how Coggins changed the word, ‘recreation.’]

“I’m not advocating being irresponsible. But I am saying that all responsibility with no breaks for fun is a sure ticket to burnout and boredom. I often ask couples whose responsibility it is to make the time available for investing in their marriages. God’s? Should we expect God to give us an extra day of the week after Sunday and call it Funday? While that may be a nice fantasy, the truth is that if we value our marriage relationships, we must take the time to keep them alive and exciting.”

Cindy and I (Steve) have found this to be important in our marriage. And it doesn’t take a lot of money to make it work. It mostly takes intentionality, and a few creative ideas to accomplish the re-creation of energy in your marriage. If you need some new ideas, you can find them on our web site in the Romantic Ideas topic.

While attending a Marriage Encounter Weekend, I learned that most relationships go through three stages. The first is ROMANCE. That’s a time when we’re so enamored with our newly discovered love that talking for hours is done genuinely and joyfully. I sometimes jokingly share that romance is the anesthetic that enables two normally very cautious people to cast fate to the wind and commit marriage.

“The second relational stage is DISILLUSIONMENT. This is the time when we discover the packages we thought we got when we married our sweethearts aren’t exactly what we had expected. It is when we become inescapably aware of the painful truth that in order for there to be disillusionment, there must have been an illusion. That girl who was so witty and funny and always had the right thing to say turns out not to have an ‘off button’ on her vocal chords! And that guy who didn’t always have a lot to say, but what he did say was ‘deep’, turns out to be the strong, silent type who doesn’t know how to communicate at all in matters of the heart.

“The third stage presents a fork in the road with one direction marked ACCEPTANCE and the other REJECTION. It’s during this stage that the ‘rubber meets the road’, so to speak. That’s when the real work of keeping a marriage healthy and growing is done or evaded. This is where presumption does its deadly deed by presuming that ‘it will all work out somehow.’ You see, ‘it’, or the marriage, doesn’t do the work of communicating when you’re weary of forgiving each other. It’s YOU, the partners in marriage, who do that work. You make the value judgment that the imperfect person you married is a valuable treasure in your life, in spite of those imperfections.

And then there is another of the deadly marriage illnesses we had better watch out for:

While there are many variations of this condition, probably none are as threatening as unforgiveness and bitterness. If allowed to remain in marriage, they can clog marital arteries quicker than cheeseburgers and French fries can clog your natural ones. They cut off life-giving love and communication that are necessary for the health and growth of the relationship.

“May I suggest a simple procedure that can fix this problem? Try reaching over to your loved one. Take his or her hand in yours. Then, simply pray for one another. Ask God to help each of you to forgive the other for the hurts that have occurred in your relationship.

“You see, I believe that if God asks us to do something, He is faithful to provide the ability to do so. In Ephesians 4:32 we are told to be ‘kind to one another, tenderhearted, forgiving one another even as God for Christ’s sake hath forgiven you.’ If it feels like the walls of bitterness are too high and trust too shattered to glue back together, believe me —no, believe God —forgiveness is the miracle cure that can make healing possible [at least healing in YOU].

And then lastly, there is the:

This occurs when a secret part of our lives is allowed to grow until it suddenly springs into view. While this malady has been around since Adam and Eve tried to hide their secret life and sin from God, in recent years a strain has been at work through the unlikely agent of the computer. The addictive nature of Internet pornography and on-line chat rooms is taking a huge toll on marriages. It is such a shame-saturated problem in people’s lives that it often grows hidden and undetected until it has done severe damage to a marriage.

“The real heart-cry that I hear from couples is that wonderful feeling of connectedness that a healthy marriage can bring. That, which can be found in chat-room affairs or cyber fantasies is NOT the real deal. Real love can’t be found in a secret life apart from your spouse.”

Cindy and I have personally seen the destruction this can cause in marriages. If you’d like some resources to help on these issues go to our web site into the Sexual Issues topic. There is also the Pornography and Cybersex topic, and other relevant topics we make available, as well.

Another Treatment for Marriage Illnesses

Something else that may help you treat the “illnesses” in your marriage is the principle of “sowing and reaping and trying to unscramble eggs.” In other words, you (or your spouse) can’t sow doses of poison into your marital life and expect that now that you’ve stopped, there are no consequences. “Illnesses” can be produced. And there could be consequences that will arise because of it. Pastor Mark Gungor, of the ministry “Laugh Your Way to a Better marriage,” explains this well in the following article, that we recommend you read:

You may feel there are more “illnesses” in your marriage that need healing. Or maybe you feel that your marriage is close to “death.” If so, Wayne Coggins has this encouragement:

“The Lord, who is the Great Physician, can and does heal and restore marriages in need of a miracle moment of healing. He also shares His rich wisdom with us so that we can build healthy marriages right out of the chute. The fact is that He wrote the Book on it, and His office is never closed.”

His “office” IS never closed. That’s why we have a Prayer Wall posted on the Home Page of our web site for you to use.

But while you’re waiting, keep in mind that if your prayers are not being answered in the timing or way that you believe they should be, God may be up to something that you haven’t been able to see up to this point. After all, He is God and we are not. “His ways are higher than our ways.” (See: Isaiah 55:8-9.)

We appreciate what Oswald Chambers says about this in his book, My Utmost for His Highest

“Even LOVE itself has to wait in pain and tears for the blessing of a fuller communion. When God looks completely shrouded [when you don’t see His plan], will you hang on in confidence of Him?

“In Luke 11:11-13 Jesus says there are times when your Father will appear as if He were an unnatural father. It’s as if He were callous and indifferent. But remember He is not. ‘I have told you —everyone that asks receives.’ If there is a shadow on the face of the Father just now, hang onto it. Know that He will ultimately give His clear revealing and justify Himself in all that He permitted.”

We hope this has been helpful. At times, we all experience some types of marital “illnesses.” But there’s hope because we can receive a touch from the Great Physician to bring healing.