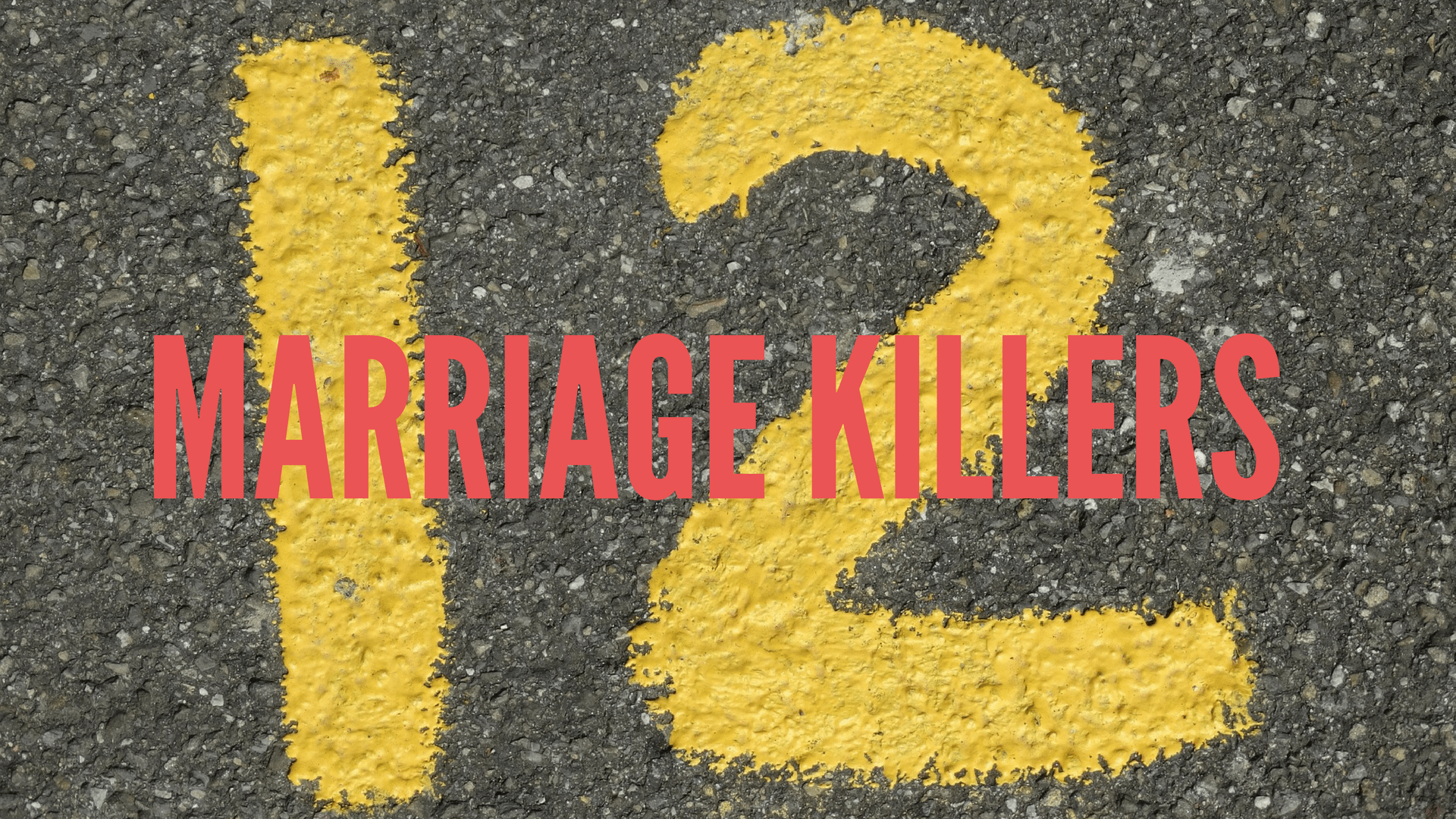 The following are twelve marriage killers that can take a marriage down if not taken very seriously. They must be avoided to the best of your ability. And if they can’t avoided then they must be tended to immediately so they don’t deal fatal blows to your marriage.

My advice to young couples is simply this: Don’t permit the possibility of divorce to enter your thinking. Even in moments of great conflict and discouragement, divorce is no solution. It merely substitutes a new set of miseries for the ones left behind.

Guard your relationship against erosion as though you were defending your very lives. Yes, you can make it together. Not only can you survive, but you can keep your love alive if you give it priority in your system of values.

Any one of the following evils can rip apart your relationship if given a place in your lives.

The Marriage Killers Are:

Beware of this danger. It is especially insidious for young couples who are trying to get started in a profession or in school. Do not try to go to college, work full-time, have a baby, manage a toddler, fix up a house and start a business at the same time.

It sounds ridiculous, but many young couples do just that and are then surprised when their marriage falls apart. Why wouldn’t it? The only time they see each other is when they are worn out! It is especially dangerous to have the husband vastly over committed and the wife staying home with a preschooler. Her profound loneliness builds discontent and depression; we all know where that leads. You must reserve time for one another if you want to keep your love alive.

• Excessive credit and conflict over how money will be spent.

Pay cash for consumable items, or don’t buy. Don’t spend more for a house or car than you can afford, leaving too few resources for dating, short trips, baby-sitters, etc. Allocate your funds with the wisdom of Solomon.

• There are two kinds of people in the world, the givers and the takers.

A marriage between two givers can be a beautiful thing. There will be friction, however, for a giver and a taker. But two takers can claw each other to pieces within a period of six weeks. In short, selfishness will devastate a marriage every time.

If either the husband or wife has not been fully emancipated from the parents, it is best not to live near them. Autonomy is difficult for some mothers (and fathers) to grant’ close proximity is built for trouble.

Some couples come into marriage anticipating rose-covered cottages, walks down primrose lanes, uninterrupted joy. Counselor Jean Lush believes, and I agree, that this romantic illusion is particularly characteristic of American women who expect more from their husbands than they are capable of delivering. The consequent disappointment is an emotional trap. Bring your expectations in line with reality.

I am not referring to aliens from the planet Mars. Rather, my concern is for those who violate the breathing room needed by their partners, quickly suffocating them and destroying the attraction between them. Jealousy is one way this manifests itself. Another is low self-esteem, which leads the insecure spouse to trample the territory of the other. Love must be free and it must be confident.

These are killers, not only of marriages, but also of people. Avoid them like the plague.

• Pornography, gambling and other addictions.

It should be obvious to everyone that the human personality is flawed. It has a tendency to get hooked on destructive behaviors, especially early in life. During an introductory stage, people think they can play with enticements such as pornography or gambling and not get hurt. Indeed, many do walk away unaffected. For some, however, there is a weakness that is unknown until too late. Then they become addicted to something that tears at the fabric of the family.

This warning may seem foolish to my readers, but I’ve made a 25-year study of those who wreck their lives. Their problems often begin in experimentation with a known evil and ultimately end in death —or the death of a marriage. The restrictions and commandments of Scriptures were designed to protect us from evil, though it is difficult to believe when we are young. “The wages of sin is death” (Romans 6:23). If we keep our lives clean and do not permit ourselves to toy with evil, the addictions that have ravaged humanity can never touch us.

These are a deadly combination!

It does bad things to men, especially. Their agitation over financial reverses sometimes sublimates to anger within the family.

It is almost as risky to succeed wildly as it is to fail miserably in business. The writer of Proverbs said, “Give me neither poverty nor riches, but give me only my daily bread” (30:8).

• Getting married too young.

These are the marriage killers I’ve seen most often. But in truth, the list is virtually limitless. All that is needed to grow the most vigorous weeds is a small crack in your sidewalk. If you are going to beat the odds and maintain an intimate long-term marriage, you must take the task seriously. The natural order of things will carry you away from one another, not bring you together.

How will you beat the odds?

How will you build a solid relationship that will last until death takes you across the great divide? And how will you include yourselves among that dwindling number of older couples who have garnered a lifetime of happy memories and experiences? Even after 50 or 60 years, they still look to one another for encouragement and understanding. Their children have grown up in a stable and loving environment and have no ugly scars or bitter memories to erase. Their grandchildren need not be told, delicately, why “Nana and Papa don’t live together anymore.” Only love prevails.

That is the way God intended it to be, it is still possible for you to achieve. But there is no time to lose. Reinforce the river banks. Bring in the dredges and deepen the bed. Keep the powerful currents in their proper channels. Only that measure of determination will preserve the love with which you began, there is very little in life that competes with that priority.

This article was edited from the classic book Love for a Lifetime: Building a Marriage That Will Go the Distance -written by James C. Dobson, published by Multnomah Gifts. This book is for every man, woman, or couple who wants to strengthen the foundation and/or celebrate the success of their marriage relationship. And it’s ideal for gift-giving —not only to couples celebrating their anniversary, but to newlyweds. Plus, you could give it to married couples, men and women who are engaged, and any couple who want to enhance their marriage.