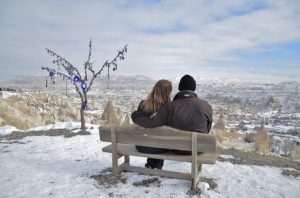 “Enjoy life with the woman (man) whom you love all the days of your fleeting life which He has given you under the sun; for this is your reward in life, and in your toil in which you have labored under the sun.” (Ecclesiastes 9:9 NASB)

“I’m certain that if more couples realized that there really is a pot of gold at the end of the rainbow, they’d be more willing to tough it out through the downpour. The problem is, most people fool themselves into thinking that whatever stage they’re in at the moment is where they will be forever. That can be a depressing thought when you’re in the midst of hard times. And in marriage, there are lots of hard times but it’s important to remember that nothing lasts forever. There are seasons to everything in life, including marriage.” (Michele Weiner-Davis)

As we work to be pro-active in our own marriage, we come across wonderful reading material that the Lord to send our way. This continually helps us to be students of each other as husband and wife. It also helps us to be students of marriage so we can grow together in our marriage in a healthy God-honoring way. We received a Smartmarriages Newsletter article titled “The Marriage Map” written by Michele Weiner-Davis, that we found to be quite insightful. We’re sharing a few excerpts from it so you can benefit from it also:

“As a long-time observer of relationships, I can tell you that, like people, marriages go through different developmental stages. Does marriage have its equivalent to the ‘Terrible Two’s’ or the stormy teenage years? In fact, it does. But because people are unfamiliar with the emotional terrain, the normal hills and valleys of marriage, these predictable transitional periods are often misunderstood. Those who manage to weather these stormy periods usually come out the other side with greater love and commitment to their spouses. That’s why I want to offer you a Marriage Map.

“As you read through these stages and developmental passages, don’t get too hung up on the timetable. Some couples move through these stages more quickly than others, and some by-pass certain stages entirely. See if any of this sounds familiar to you as you think about your own marriage.

You’re head over heals in love, you can’t believe how blessed you are to have met each other. You have so much in common. You’re completely in sync. When little, annoying things pop up, they’re dismissed and overlooked. You feel good in your partner’s presence and start to believe that he or she is bringing out the best in you and you decide to commit to spending the rest of their lives together. And marry, you do.

“Unless you elope or opt for a simple wedding, your euphoria takes a temporary nosedive as you plan and execute your wedding. Once you get past the challenges of hosting a modern-day wedding, your obsession with each other re-emerges and takes you through the honeymoon period. And for a period of time, nothing could be more glorious. But soon, your joy gives way to an earth-shattering awakening; marriage isn’t at all what you expected it to be.

“STAGE TWO: WHAT WAS I THINKING?

In some ways, stage two is the most difficult because it’s here that you experience the biggest fall. What accounts for this drastic change in perspective? For starters, reality sets in. The little things start to bother you. Although you once thought you and your spouse were kindred spirits, you now realize that there are many, many differences between you. You feel disillusioned and wonder if you made a mistake.

“STAGE THREE: EVERYTHING WOULD BE GREAT IF YOU CHANGED.

In this stage of marriage, most people believe that there are two ways of looking at things, your spouse’s way and your way, also known as the “Right Way.” Rather than brainstorm creative solutions, couples often battle to get their partners to admit they’re wrong. Now is the time when many people face a fork in the marital road. Three choices become apparent. Convinced they’ve tried everything, some people give up. Other people resign themselves to the status quo and decide to lead separate lives. Ultimately, they live unhappily ever after.

But there are still others who decide that it’s time to end the cold war and begin to investigate healthier and more satisfying ways of interacting. Although the later option requires a major leap of faith, those who take this leap are the fortunate ones because the best of marriage is yet to come.

“STAGE FOUR: THAT’S JUST THE WAY S/HE IS.

In stage four, we finally come to terms with the fact that we’re never going to see eye-to-eye with our partners about everything and we have to figure out what we must do to live more peaceably. Fights happen less frequently and when they occur, they’re not as intense as in the earlier years of marriage. We let things roll off our back that might have caused us to go to battle before. We stop being opponents. We’re teammates again. And because we’ve reached this stage, we reap the benefits of the fifth and final stage.”

Now, before we go onto Stage Five, which is the stage my husband Steve and I are in —one I wish everyone could get to and enjoy, I want to share something that other couples have found. It’s something that Thomas Whiteman, and Thomas Bartlett wrote about in their book, “The Marriage Mender.” They talk about “mature love” and what it takes to get to this stage (although I’m not sure we can entirely reach this stage because we all, on this side of heaven, have threads of selfism flowing through us).

“Couples [who have reached mature love] have learned to appreciate each other’s uniqueness. But they don’t just sit back and bask in the beauty of love as if all their work is done. They also recognize the ‘weeds’ of the relationship —petty arguments, jealousies, attitudes that can creep up and choke the life out of the relationship. Couples at this stage are better at tending the garden, picking weeks before they become major problems, and spreading the nourishment of safety, respect and solid communication.”

And now, for this next stage of “mature love” or “Stage Five”, which Michelle writes about:

“STAGE FIVE: TOGETHER, AT LAST.

It’s really a tragedy that half of all couples who wed never get to stage five. This is when all the pain and hard work of the earlier stages really begins to pay off. You’re no longer in a struggle to define who you are and what the marriage should be. For this reason, there’s more peace and harmony. You start having ‘old day feelings’ again. You’ve come full circle. The feeling you were longing for during those stormy periods is back, at last. You’re home again.

“ABOUT THE MARRIAGE MAP:

It’s important to remember that people generally don’t go through these stages sequentially. It’s 3 steps forward and 2 steps back. Just when you begin to feel more at peace with each other in stage four, a crisis occurs. You then find yourselves slipping back to stage three. But if you’ve been fortunate enough to have visited stage four, sanity sets in eventually. You are able to get back on track. Love is dynamic. So is marriage. The wiser and more mature you become, the more you realize this, and the more time you and your spouse spend hanging out in stage five. Together again, at last.”

We hope this makes sense to you. It sure has to us and many other couples we know. If you want to learn more about these states, our understanding is that you can read more about them (and other information) in a book titled, The Divorce Remedy

, written by Michele Weiner-Davis. You may want to see about obtaining it. Also, here’s a link to a little expanded version of what you see above. It’s posted on Michele’s web site, that might help you in the meantime: The Marriage Map.

Our love and prayers are with you as together we work on our marriages to the glory of God.