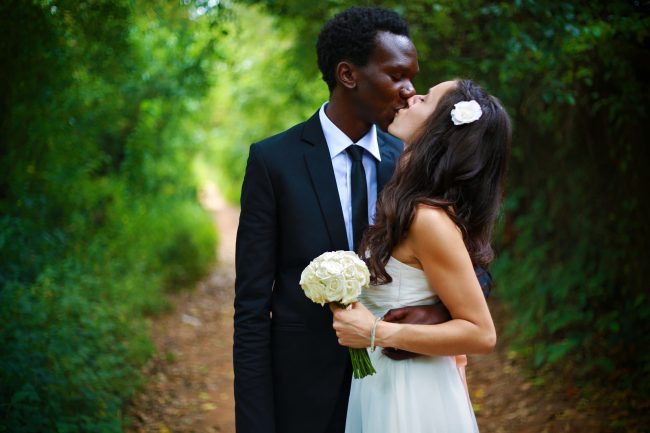 When you say, “I do” and enter into the covenant of marriage, DO YOU REALLY? Do you really mean what you’re promising? Or are you just mouthing words that sound romantic and seem to fit for that moment in time during the wedding ceremony (and then you don’t mean them later when they don’t seem to “fit” any longer)?

One pastor we heard of, recommends to everyone he marries that they write out their wedding vows, frame them, and then display them somewhere in their home so they’ll continually be reminded what they promised each other. What an outstanding idea! Too often we forget what we promise each other on our wedding day —kind of like the man “who looks at his face in a mirror and after looking at himself, goes away and immediately forgets” (James 1:23-24). We often say our “I do’s” at the altar and then walk away afterward from what we promised as if we never said them.

But we need to tell you that the marriage vows you promise each other, are very important to God. They aren’t something God takes lightly or later forgets. And neither should you or your spouse. The Bible says, “Let your ‘yes’ be yes, and your ‘no’ be no or you will be condemned“ (James 5:12). It’s also noted, “It is a trap for a man to dedicate something rashly and only later consider his vows“ (Proverbs 20:25).

Up front, we want you to know this isn’t a Marriage Message intended to throw verbal stones at anyone. God knows we’re ALL sinners, and no one can “cast the first stone” without throwing some their own way (and Steve and I recognize that we’re included in that mob). Sadly, we’ve sure gone through times when we didn’t take our vows as seriously as we should have!

Instead, this message is hopefully a wake-up call for us all, as it concerns our marriages. As God’s children, we are God’s ambassadors representing the bride and Bridegroom to a world that needs to see this living picture lived out in healthy ways. And may we do so to the glory of God!

Author H. Dale Burke says something important about the marriage vows couples promise each other on their wedding day. He says that those who marry often look at them as a romantic, “legal” or “religious” formality “to be dispensed with before the party can begin” (and afterward they wake up to reality, rather than a lifelong party). He says,

“… Maybe they just consider [their vows] to be a part of cultural tradition, like singing the national anthem before a ball game or saying the pledge of allegiance at the start of a school day. But what SHOULD it mean —what DOES it mean to say such things to a person in the presence of God? What does God do during the wedding? Is He, like us, merely a spectator?”

No. God said, through the Bible, something that both men and women should pay attention to:

God takes marriage and committing violence with words and deeds very seriously. It is a way of breaking faith. (Ephesians 4 and 5 and 1 Peter 3 speaks more on this and the way we should conduct ourselves in our marriages so that we live with each other in an “understanding way.”

In all honesty, Steve and I have to admit that we didn’t have much of a grasp on understanding what we were committing ourselves to on our wedding day. If God hadn’t woken us up (and we hadn’t followed His leading), our marriage would have probably ended up as a divorce statistic instead of a love story written by God (which we believe our marriage is now). God showed us that when we started treating each other disrespectfully, our relationship started to go down the same slippery slope that many others go down to their marital deaths (as ours almost did as well).

We had to make a complete reversal of the way we were treating each other and learn how to relate together in healthier ways. And it sure hasn’t been easy, and at times it still isn’t to this day! Even though we know better, we find that we can still fall into the same “disrespectful and unloving” trap other couples do as they try to live out their wedding vows.

When that happens, we have to step back, regroup, connect again with God and with each other, and “fight the good fight” WITH GOD, instead of aiming at and fighting against each other. (If you find yourself in this same hurtful cycle, you’ll find a lot of helpful articles, tools, and recommended resources on the Marriage Missions web site to help you make your relationship a healthier one. Plus, at the end of this article we have a link to an additional article on this subject to help you further.)

H. Dale Burke, in his book, “Different by Design” (published by Moody Press) gives insight on this when he wrote,

“I’ll never forget the couple who showed up in my office weekly trying to patch up their marriage which, while in trouble, had incurred no damage that was beyond repair. … This was just two Christians who hadn’t learned to think ‘we’ instead of ‘me.’ They had never been taught to value and respect one another or nurture their love.

“Tragically, the biggest obstacle standing between them and reconciliation was Christian friends who kept fueling their frustrations and counseling them to give up. The very group of people who should have been cheering their efforts to save the marriage was sabotaging the rescue mission.

“At least one part of this couple’s problem was rooted in a misunderstanding of what marriage is all about. They, like most newlyweds today, saw marriage as a contract, which, according to my dictionary, is a ‘binding agreement.’ At the heart of every contract is a set of conditions or promises —the ‘deal.’ The deal is, you do this for me and I’ll do that for you.

“A contract lays out what ‘this’ and ‘that’ consists of. It also has an escape clause; either stated or implied, which says that if you fail to do ‘this,’ then I can stop doing ‘that.’ And in recent times, quite frankly, many people don’t feel that their contracts mean much of anything. All I need to justify breaking one is to say I’m not happy with the deal.

“Tragically, this flexible concept of contracts is how many people now view marriage. ‘If my marriage is an ordeal,’ they say, ”I’ll opt out and look for a better deal somewhere else.’ This is the unspoken amendment many people attach to their spoken vows of matrimony. Men and women differ in a lot of ways when it comes to what they bring to the marriage relationship, but this is a weakness they both share. Thousands of husbands and wives exercise this escape clause every year.

“A question worth asking, then, if words have meaning and we desire to be responsible with our wedding vows, is the same question abbreviated on so many bracelets and other items in recent years: What would Jesus do? Or better yet, what would Jesus declare about marriage, divorce, and the meaning behind those vows so often heard at weddings?”

You can read what Jesus said in Matthew 19 and you can understand more as you read through what the Bible says about relationships. Saying “I do” is the easy part, living it is a whole different matter. That’s the difficult part!

Through it all, please know that:

“Marriage can be wonderful. It can be deeply satisfying and mutually fulfilling. But IF it becomes that, it is because BOTH partners have paid a very high price over many years to make it that way. They will have died to selfishness a thousand times. They will have had countless difficult conversations. They will have endured sleepless nights and strained days. The will have prayed hundreds of prayers for wisdom and courage and understanding. They will have said, ‘I’m sorry’ too many times to remember. They will have been stretched to the breaking point often enough to have learned that, unless Christ is at the center of both their lives, the odds for achieving marital satisfaction are very, very low” (Bill and Lynne Hybels).

And to that we say, Amen! It’s a tough mission —one that is more difficult than we could ever anticipate before we say “I do.” But with mind-sets to persevere, with intentionality to do what it takes to make your marriage the best it can be, and with God’s help, all things are possible (and can have it’s times of being “wonderful”).

We pray as you look to the Lord, He will help your marriage to be one that reflects the heart of Christ,
Cindy and Steve Wright

To help you further on this subject, please click onto the link provided below to read the Crosswalk.com article titled:

• 9 SUCCESS FACTORS AFTER SAYING “I DO”