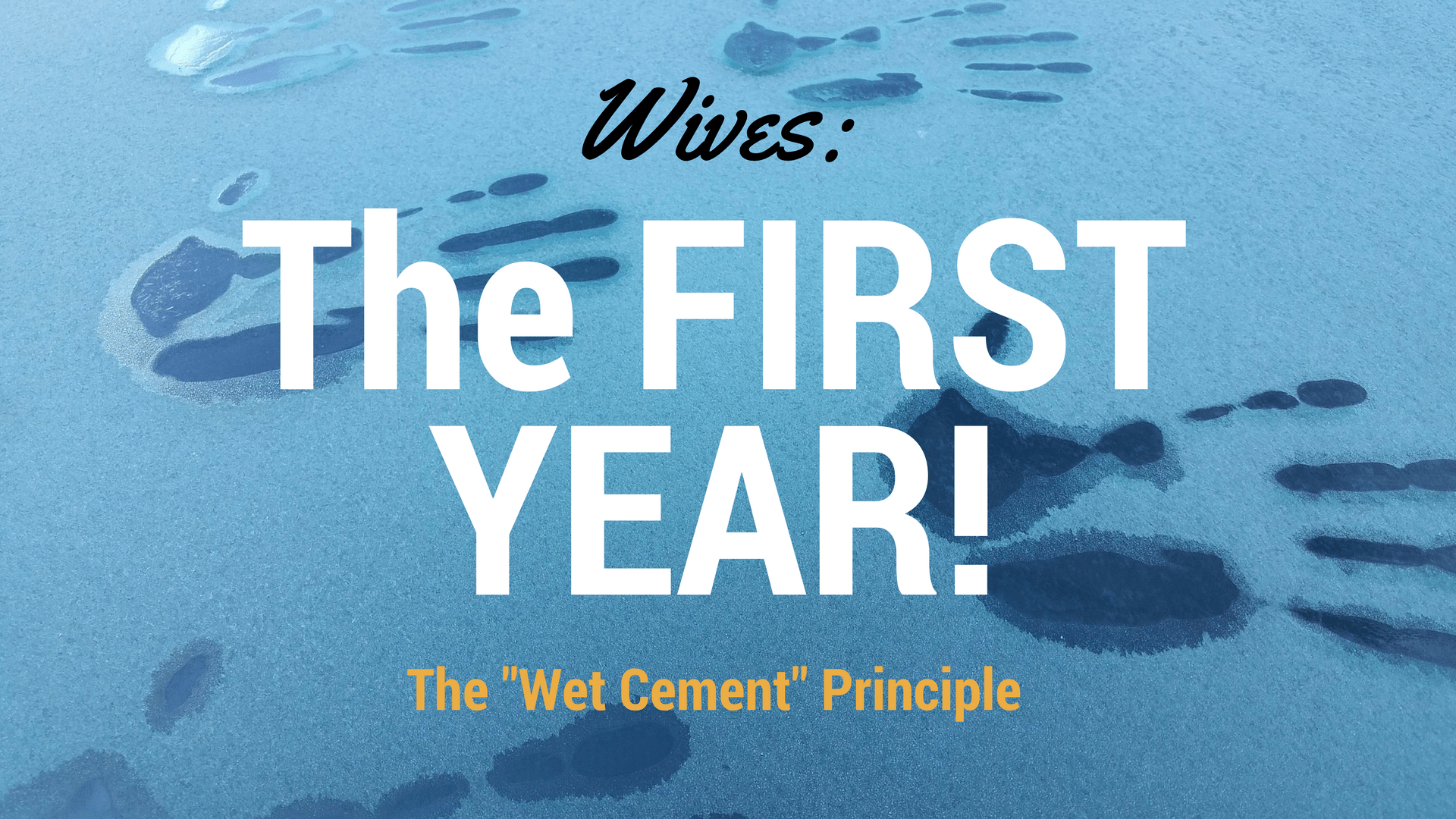 Have you ever walked down a sidewalk and seen a hand print, footprint, or someone’s name etched into its surface? Think about how much work it took to make those marks. And think how difficult it would be to change them now that they’ve dried. Indelible marks are made on your marriage early. They’re not very difficult to make, but they’re extremely difficult to change, especially beyond the first year.

Scripture is clear that there is —and should be —something undeniably different about the first year of marriage. The implication is that, particularly for a husband, there is a receptivity to change during this year, perhaps as at no other time in his life. We call this “the wet cement year.” Once the patterns of the marriage are set, change can and does occur, but it may take something like a jackhammer to bring it about.

Too many women spend the first year of marriage working hard not to make waves. They’re hoping that the little irritants and insensitivities of their husbands will simply go away. But in almost every marriage we’ve observed, problems not dealt with in the first year simply become larger and more paralyzing as the years go by.

The Slow Learner Principle—”For one year”

Have you ever heard one of these comments come out of a woman’s mouth?

Consider the contrast between the attitude that lies beneath these comments. And consider the suggestion from the Bible that it will take a man an entire year of focused effort to learn how to please his wife. An entire year!

The changes that a couple needs to make (particularly the changes the husband needs to make) can be less painful if dealt with in the first year. But they may not come quickly. Our friend Lois was particularly startled at how challenging the first year of her marriage was. Things just fell into place so naturally when she and Andy were dating. But now, it felt as though they were swimming through molasses. Her frustration came primarily because she wasn’t prepared. She simply hadn’t anticipated how slowly her husband would be able to “figure things out.”

Awareness that lasting change will take time can free a wife from having to resort to negative nagging to motivate her husband into change. Being prepared in this way can help her to celebrate the small steps of growth her husband does make as he is learning to “bring happiness” to her.

Let’s face facts: Most husbands are clueless when it comes to understanding women. They love their wives and want to see them happy. But they are easily confused about expressing love in a way that truly brings pleasure to their wives.

…Look closely at the Old Testament passage [Deuteronomy 24:5, which says, “If a man has recently married, he must not be sent to war or have any other duty laid on him. For one year he is to be free to stay at home and bring happiness to the wife he has married.“]. The good news hinted at in this ancient Scripture is that your husband can, in fact, learn to understand what brings you pleasure. Your husband is not expected to become a genius when it comes to women. He is, though, charged to become the world’s greatest expert at understanding what pleases you! And to accomplish this, he will need your help.

Bobbie has a friend who was a first-grade teacher. She told me the story of Zachary, the boy with the unkempt hair. Day after day Zachary came to school with a terminal case of “bed head.” What is this boy’s mother thinking? That teacher wondered.

One day she announced, “Tomorrow is picture day,” and then she wrote a note to the children’s mothers and sent it home in the kids’ classroom with his hair perfectly combed. This was her big chance. Before class began, Zachary made his way toward her desk, and she spoke to him quietly enough that none of the other students could hear. “Wow, Zachary, you’d better get your running shoes on,” she said with a twinkle in her eye. “Your hair looks so good that all the girls will be chasing you today!”

She never had to say anything else the rest of the year about Zachary’s hair. She didn’t need to.

Men are wired a good bit like little Zachary —wired to respond to the positive feedback that comes from the decisions they make. There are few things more powerful a wife can do to motivate her husband than to let him know that his actions and his words are making a difference.

I love the way Neil Clark Warren makes sense of this process: “My love for another person is strongly related to my love for myself when we are together. If the most potent motivation in my life is to feel good about myself —and I believe it is —then I will love an individual most when she helps me to feel best about myself.”

When a wife says, “I like that!” or “That counts for me,” her husband feels empowered. He is motivated and is much more likely to repeat what he did to please her. But a man who believes that he can never satisfy his wife will soon give up trying and invest his energy in places—like his job. This is where the results are much more clearly seen.

Am I suggesting that you fake happiness so your husband can feel good about himself? Not at all. I’m merely saying that one of the greatest gifts you’ll ever give him is to respond well to the things he does do that make you happy. He needs to know that you noticed.

, written by Robert Wolgemuth, Bobbie Wolgemuth, Mark DeVries, and Susan DeVries, published by Zondervan. It’s the winner of the Silver Medallion Book Award and is a terrific book! The Wolgemuth’s and the DeVries offer here a two-in-one, flip-over-format volume aimed at newlywed Christian couples. One half is written for him and one half is written for her. It’s a really clever idea!

We HIGHLY recommend this book for newlyweds. The above article is just a sample of some of the insightful information and advice you’ll get as you read the book in its entirety. We hope you’ll find a way to obtain it.