What You Say, What She Hears 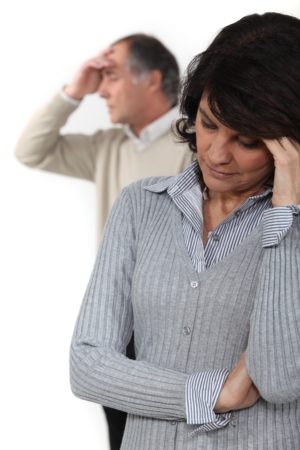 It’s a familiar story. The Knicks are playing the Lakers. It’s 82-81 with just under two minutes left in the game and home court advantage in the play-offs is on the line. You click the picture-in-picture button and toggle between two other key games. Technology is your friend.

Your wife emerges from the bedroom, and you get that sinking feeling in your stomach. She was a little teary eyed last Tuesday because she said you didn’t listen, and you resolved to be a little more sensitive from now on. The room is becoming filled with that tension that says she needs to talk now. So, sensitive man that you are, you utilize your multitasking skills.

You click the mute button and ask her what she needs. This is mistake No. 1, according to Tom Walton, a psychology professor and interpersonal communication expert at Warner Southern College in Lake Wales, Florida.

“It doesn’t do any good to hit the mute on the TV,” Walton says. “You have to hit the off button.”

Next, you give a little feedback: “Uh-huhs” and “I sees.” And the Knicks win! Mistake No. 2. Walton says you should have turned to face her. “You need to listen with your eyes as well as your ears,” he says. “Hearing is natural, but listening is hard work.” (Tom Walton)

The entire time, your wife has been telling you dozens of things, and most of them have little to do with the words she has been speaking. Since you aren’t a mind reader, you probably feel baffled by the whole thing.

But there are secrets to this business of loving and understanding your wife. Walton offers 14 keys to help you improve your communication with the most important woman in your life.

1. Remember, It’s All About Eye Contact. You’ve heard the old sayings: A look can say a thousand things; the eyes are the gateway to the soul; the truth is hidden in the eyes of a man. Your eyes communicate things that words cannot. They can reflect understanding, anger, doubt, joy, sincerity, pain and just about every other human condition.

When you look into your wife’s eyes as she talks, you let her know that you are listening completely, with your whole self. You tell her that you value what she says without saying a word.

2. Take a Posture of Involvement. Your body communicates more than your mouth does. When your shoulders are turned away from your wife, you are effectively disengaging yourself from her. Walton suggests easy remedies. Turn toward her. Uncross your arms. Incline your head toward her. Lean in.

3. Read Body Language. Walton observes a curious pattern in the families he counsels. “In most families, there is a designated problem,” he explains. “It’s easy to tell who it is. No one points a finger. They don’t have to. (The other family members’) bodies do it for them.”

Your wife’s body language will tell you much about how she really feels. Are the muscles in her neck tightening? Is she sitting closer or farther away than she usually does? How does she respond to your touch? Is she smiling? Are her shoulders slumping? A wise husband learns these cues and responds appropriately.

4. Watch for Warning Signs. There are three signs that usually mean something is wrong. The first is a total lack of communication. If your wife shuts off the flow of information, watch out. There is an unresolved issue brewing underneath.

The second is an immediate denial of any problems in a marriage. This phenomenon can often be observed at social functions, where a couple confidently asserts that theirs is the perfect marriage, free of any disagreement or trouble. What it really means is that the partners know something is wrong, but they may not know what it is, and they don’t know how to fix it.

A third sign is a significant change in behavioral patterns. These often include sleeping and eating habits that change quickly and radically and signify an attempt to cope with something in the relationship that has not been addressed.

5. Utilize Good Following Skills. Listen to what your wife is saying and encourage her to tell you more. Many men ask their wives closed questions like, “How was your day?” that can be answered in one word.

Instead, ask your wife open-ended questions or make statements that facilitate conversation such as, “Tell me about your day.” This is like opening a door into her world.

6. Use Minimal Encouragers. Small gestures can communicate big notions. Merely nodding your head indicates empathy and concern. If you are discussing a serious subject with your wife, and she is allowing herself to be vulnerable with you, an appropriate touch on the arm, hand or shoulder can speak volumes and reflect care and understanding. A hug at the right time shows your love and compassion.

7. Develop Reflective Skills. “It really doesn’t matter what you thought you said,” Walton says. “What really matters is what (your wife) heard you say.”

Walton offers some tips to avoid misunderstandings in your responses and to help keep the flow of communication open and positive. Ask your wife to clarify what she means. Ask her to give an example that helps to illustrate her point.

Summarize or paraphrase what you think she means and ask if your interpretation is correct, but don’t just regurgitate the same words back. Affirm her good point and let her know when you agree or are excited by something that she says.

8. Use Silence Appropriately. Americans hate silence. Our society often values busyness and the appearance of motion above all else. The costs of this emphasis are often catastrophic to good communication. Instead of really listening to the person with whom we are interacting, we try to think of the next thing we will say or the next story we will tell.

Sometimes it is better to wait a moment before jumping into the first available pause for breath and speaking. Look at your wife. Is she still thinking about what she is saying and working on the next thought she will share with you? Is she emoting? Or is she now ready for you to respond?

9. Know Your Wife’s Values and Accept Her Where She Is. This is an issue that causes struggle for many Christian men, especially in those whose wives don’t share their intensity of commitment to God. Knowing and accepting your wife doesn’t mean that you have to approve of her behavior or agree with all of her ideas.

When your wife shares a difficult issue with you, she may not necessarily want you to fix it for her. She may just want you to listen and try to understand and empathize. Try speaking “with” your wife instead of “to” her.

The same is true for you. Have you ever told your wife that she “never” does something or that she “always” does something else? According to Walton, most household fights take place because we exaggerate and use inaccurate or absolute words to overillustrate a point we are trying to make.

He suggests that men ask thoughtful questions like, “Would you mind watching the game with me tonight?” instead of making harsh, declaratory statements such as, “You never let me watch the game.”

12. Remember That Words Evoke Emotion. “If I, like Archie Bunker, call my wife a dingbat, she can get upset with me, or she can shrug it off,” Walton says. “But if she shrugs that off, what else will she shrug off?”

Our words can pierce the souls of the ones we love the most. Words are powerful, pregnant with meaning and loaded with connotations that connect with the very core of our spirits. A word of praise or affirmation enriches the listener, and a word of discouragement can cut down a blossoming intimacy before it has a chance to grow. Choose carefully the words that you speak to your wife.

13. Practice Intentional Focus in the Bedroom. Sex can be a tricky subject for men who have been raised in the church and nurtured in an outside world obsessed with its sensual side. Some Christian men think that it is an inappropriate topic for conversation, even inside the place where God created sex to belong–in the context of a marriage relationship. They think that discussing sex is “talking dirty” and that it might make them appear “less spiritual.”

Other men become so focused on their own physical pleasure during intimate moments that they forget the sharing and lovemaking aspects of their sexual relationship with their wife and the importance of meeting her physical, emotional and spiritual needs.

Walton encourages men to become more focused on meeting those needs. “Men must ask questions such as, ‘What is my partner experiencing?'” he says. “It takes willful intent to try to watch your wife and get the messages she is sending. Men must realize that they are not good at watching her, and it is important to learn to do so.”

14. Move From Nonverbal Cues to Saying the Words. We may learn to pick up nonverbal cues, but at some point there is no substitute for old-fashioned, complete sentences. Say the words. Let your wife know what you are thinking and how you are feeling. It might be the most important gift you can give her.

Now, let’s re-examine the scene. The Knicks are playing the Lakers. It’s 82  81 with just under two minutes left in the game and home court advantage in the play-offs is on the line. You click the picture-in-picture button and toggle between two other key games. Technology is your friend.

Your wife emerges from the bedroom, and you notice that her shoulders are a little slumped, and she looks tired. You turn off the game, rise from your recliner and sit facing her on the couch. You look into her eyes and say, “Tell me about your day.”

She tells you about her frustration with the kids and the spilled milk in the refrigerator and the VCR that flipped out and ruined the movie she wanted to tape for you last night. You resist the urge to tell her what to do. Instead, you ask meaningful questions and listen with your eyes, your ears, your body. You hold her closely and tell her that you love her. You’re learning.

This article was formerly featured in New Man Magazine (which is no longer being published) and was written by Kyle Minor, who is a free-lance writer.

5 responses to “What You Say, What She Hears”