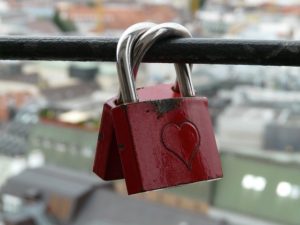 Are you committed, no doubt to do what it takes to make your marriage as good as it can be? In a past Marriage Message, we considered what it means to be “Committed for Life,” (Marriage Message #194). And we also viewed the Gary Thomas video, talking on STAYING Committed (which can sometimes be tough to do). Making vows isn’t as difficult as living them.

How appropriate that we received our Family Life “Moments with You” e-newsletter recently, which also touches on this issue. In it, they give an excerpt from the book, Moments With You: Daily Connections for Couples, centering on the hazards of standing in the “Middle of the Road.” It was based on the scripture, which reads:

The authors, Dennis and Barbara Rainey compared it to standing in the middle without making a commitment. As they said, “truly, the middle of the road is no place for anyone to be.” Below is portion of what they wrote. They make an excellent point, as far as living out our commitment in marriage, and our commitment for Christ:

“Sadly in our culture today, far too many Christian families are parked in the middle. Not sure what they believe. …Not willing to take a stand on certain issues that are clearly biblical. Basing their lives on ‘near beliefs.’

“I believe that God is calling families like yours today to be counter-cultural. This is not in a weird, obnoxious way, but establishing a lifestyle that communicates at a glance, ‘This family is different. They’re distinctive in their beliefs and practices. They represent Jesus Christ.’

“There is no reason why so many Christian marriages should end in divorce. There is no reason why people who call themselves evangelicals should account for one in every six abortions performed in America. …We’ve spent enough time in the middle of the road. It’s time to get in gear in the right direction and head for home.”

We are then challenged to:

“How would an outsider tell the difference between your family and one who didn’t claim to be Christian?”

Upon reading this devotional, I looked over at the wall next to my desk. I read the following scriptures (from Philippians 3:7-14), which I have posted there. I could easily see the correlation in making the hard-fast decision to stand committed. May they challenge you as much as they do me in our commitment to Jesus Christ. And may they challenge you in your commitment to marriage.

“Whatever was gain to me I now consider loss for the sake of Christ. What is more, I consider everything a loss because of the surpassing worth of knowing Christ Jesus my Lord, for whose sake I have lost all things.

“I want to know Christ —yes, to know the power of his resurrection and participation in his sufferings, becoming like him in his death, and so, somehow, attaining to the resurrection from the dead.

“Not that I have already obtained all this, or have already arrived at my goal, but I press on to take hold of that for which Christ Jesus took hold of me.

“Brothers and sisters, I do not consider myself yet to have taken hold of it. But one thing I do: Forgetting what is behind and straining toward what is ahead, I press on toward the goal to win the prize for which God has called me heavenward in Christ Jesus.”

Can an “outsider tell the difference between your family and the one who doesn’t claim to be Christian?” Do you communicate the gospel with and without words by the way you live your life within your marriage commitment?