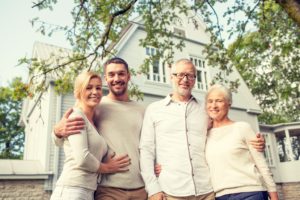 I confess that I didn’t see a good marriage being lived out. Yes, my parents stayed together most of their married life. (They were separated for a while because of infidelity by one parent.) But even when they were together, they weren’t good examples of a marriage partnership I would want to emulate.

And sadly, Steve and I started to live out our marriage in unhealthy ways too. We didn’t mean to, but we didn’t know any other way. So we went with what appeared to come natural to us. It wasn’t good, and eventually led to a time of separation.

Major Changes Needed to Be Made

Fortunately over the years, God has been working with us to make some major changes, to grow us up. He has helped us learn better ways of dealing with our differences, and that, which invades our marriage. Even though our marriage isn’t perfect, it sure is good. It’s the type of marriage that I sure hope others get to experience.

All of this has helped me to come to the conclusion that even if you didn’t see love lived out in healthy ways within the home you grew up in, and even if you never saw good examples of a married couples that lived “a life of love” (as we’re told to do Ephesians 5:1), that isn’t an excuse for you to have a dysfunctional marriage.

If you didn’t SEE good examples lived out, you can still BE the good examples for others to see. And the bonus is that you and your spouse get to enjoy a good relationship behind closed doors, as well. That’s what my husband Steve and I have learned in our 45+ years of marriage.

I have to say that in the first years of our marriage we used to interact with each other in extremely unhealthy ways. We fought about most everything one can imagine. We dragged so much emotional baggage into our married lives and threw it at each other regularly. Never did we realize how much we were destroying our relationship by doing what we saw others do. We needed to do better than what we had seen lived out in our growing up years, or we wouldn’t make it.

Thankfully, little by little, God has been opening our eyes and helping us to make better choices in how we interact with each other. To get to that place, we’ve had to “unlearn” a lot, learn a lot. Plus, we’ve had to apply the good that we’ve learned. It does no good to have great relationship tools all around us, and then use them when it’s best to do so.

One of the many ways that we’ve learned how to have a good marriage is to watch others who are living out marital love in ways that we would want for ourselves.

But it has taken quite the search. That is because some couples look like they have it together, and yet they don’t. We have looked (and still look) for the genuine thing —not a false front. And it has helped us a lot.

And we’re not the only ones who have gone on this hunt. I’ve been reading the book, The Best Advice I Ever Got on Marriage

, compiled by Jim Daly of Focus on the Family. In it I read about Bill and Pam Farrel and their “hunt” to find good marriages. Here’s a portion of what they wrote that might inspire you to do the same:

“When we got married, we knew we loved God and we knew we loved each other. But we had far more questions about successful marriage than answers. Neither of us wanted to model our marriage after our parents’ marriages. So we went looking for advice.

“We used to stand in the back of the church until most people were seated. We would then look for couples who appeared to have been married awhile yet still liked each other. A couple that was laughing together or making affectionate physical contact was an obvious draw for us. We would then sit right behind a couple like that. And during the greeting time I (Bill) would look at the husband and ask, ‘You two look like you are in love. Is it real?’

“Every time the couple looked at each other and said, ‘Yes, it is,’ I would then ask, ‘How did you do it?'”

The couple would then tell them. Sometimes they would spend time with them to help them in different ways. What a great gift these couples gave to Bill and Pam. They were a couple who needed others to invest their time and efforts into helping them build a loving marriage too.

We have done the same for other couples.

I’ll never forget the first time this happened to us. This couple had done almost exactly the same thing that Bill and Pam had done. They approached us after church telling us that they had been watching us for a while to learn what they could. I remember Steve and I talking later saying how glad we were that we didn’t have “off” days while they were watching. They wouldn’t have seen such a “good example” to observe. We would have and they would have missed out on a great time of connecting and encouraging one another.

I want to coax you to find good examples of marriage and BE a good example of marriage. In doing so, you will gain more than you could ever imagine. It’s the principle of “encouraging one another” laid out for us throughout the Bible. You will be blessed as you do.

I want to challenge you with something else that Bill and Pam wrote on this matter, which I hope you will take to heart:

“If you are new to marriage, seek out the wisdom of those with years of joyful experience under their belt. And if you, by God’s grace, have found something that works well for your marriage, take a young couple to lunch. You never know where the little bit of advice about marriage you plant may blossom into marriage —saving hope and guidance for that couple.”

This article is written by Cindy Wright of Marriage Missions International.

One response to “Find Good Examples”