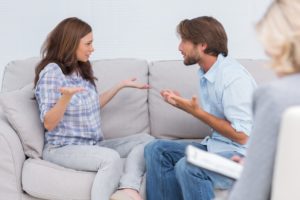 I’ve been working with people in psychotherapy for nearly 25 years. I’ve stared at hundreds of marriage problems from every conceivable angle. And I’ve listened to people talk through their tears and their anger about what went wrong. I’ve become convinced that we can eliminate hundreds of thousands of marriage failures if we will recognize that most marriages that fail were in deep trouble the day they began. They didn’t have stability in marriage. The fact is that most people whose marriages fold simply selected the wrong person to marry.

But the good news is that we are developing better ways of determining ahead of time whether a marriage will succeed or fail. One prominent recent study indicates that marriage success or failure can now be predicted before the wedding day with 81 percent accuracy. We are beginning to isolate the factors that contribute significantly to marital breakdown or growth. Let me briefly share with you 10 of the reasons marriages often fail.

The decision to get married is made too quickly.

In order for two people to make an evaluation of how good the fit is between them, a tremendous amount of information must be shared and processed. That takes time, plenty of time. I say two years or more of thoughtful involvement with each other. Marriage failures often involve people who made a rapid-fire decision about the most important family matter they will ever consider.

The decision is often made at too young of an age.

The fact is that in our society adolescence often lasts much longer than in other societies. Until persons have reached their mid-20s, they usually have not developed sufficiently —either emotionally or spiritually —to make long-term predictions about life direction possible. In the absence of such predictions, how can anyone judge how well their fit with someone else will be in the future?

The couple has unrealistic expectations.

One man told me, “I knew when we were dating that we had some serious problems. But I was sure that things would get better after we got married.” A woman, only two years into her marriage, said: “He promised me that after we were married he would stop drinking. He would start going to church with me, but he hasn’t and he won’t.”

I’ve talked to scores of individuals who, when considering divorce, said that they did not know what they were getting into when they got married. Their expectations were totally naive and unrealistic. And I often find that people think of marriage as the place to get all of their needs met.

• They think marriage will make them suddenly feel good about themselves.

• They’re sure a marital relationship will “fix” a lot of their other emotional and mental problems.

• They think the friendship with their mate will take care of all their friendship needs.

Most of this is dead wrong. The fact is that prospective spouses need to get these issues dealt with on their own before marriage. If not, they are likely to submerge the relationship under the weight of unresolved personal problems.

The decision is often made largely on romantic grounds.

Television has inflicted on us the idea that romantic love is all that’s necessary for building a lasting relationship. This is outrageous! When we find ourselves in a relationship, and our hormones are sending exciting messages throughout our bodies. It’s like we’re living on a cloud, floating from one form of ecstasy to another. And we may think that marriage will be easy.

Now, there’s not a thing in the world wrong with this kind of romantic love. In fact, it’s crucial for a couple to nurture this dimension for as long as they are together. God gives us the capability of feeling this way about a person of the opposite sex. And there’s nothing quite so enjoyable. But if romantic love is not built on far deeper and sturdier realities, it has a tendency to collapse in the face of the tough realities of married life.

As a matter of fact, it is probably true that most young marriages that fail have their beginnings in the billowy clouds of romantic feelings and dreams. This is a great place for a relationship to begin. But it’s a dangerous foundation on which to base a lifetime decision about a marriage partner. The “crashing to earth” experience of these couples —so devastating —is usually caused by the lack of steel-like structures undergirding the romance. The greatest fallacy of all is that romantic love is everything that needs to be considered in choosing a mate.

One or both persons has a poorly developed self-image.

Numerous psychological research studies have demonstrated that there is a high correlation between self-esteem and the acceptance of others. In a very real sense, persons can love others only as they learn to love themselves. A marriage relationship has a far less chance of succeeding when self-esteem is a major problem for one or both of the partners.

One or both persons has significant concerns about the personality of the other.

If you are thinking about marrying a person, and there are qualities about your partner’s personality that you’re having all kinds of trouble with —like their jealousy or temper or regular unhappiness or undependability or lying or stubbornness or moodiness —ask yourself if you’re willing to spend the rest of your life dealing with these problems. Personality features like these almost never simply vanish when you get married.

The key is to require that they be worked through well before you say, “I do.” Do this even if it means a delay of your wedding date. If you can’t get them resolved on your own, secure the help of a Christian psychologist, psychiatrist or marriage counselor. Whatever you do, don’t just “hope that everything will turn out fine.”

If you can’t answer “yes” to all four of these, you have a communication problem that could cause all kinds of trouble.

Even routine conflicts do not get resolved.

I remember counseling with a couple about their impending marriage. They were having a terrible time with this area of conflict resolution. This couple disagreed about all kinds of things. They even had different ideas about the best ways to solve their disagreements. She told me that he always had to win every argument. And he told me that he usually ended up feeling responsible for every problem they had. I knew they were in deep trouble. So I recommended that they delay their marriage until they developed the skill to solve their problems. They needed to be solved in a way that left them both feeling good about themselves and each other.

Religious beliefs and values are not shared.

Experimental studies indicate that this is a crucial area. If one partner is deeply committed to Christ, and the other partner does not share this commitment, the marriage is severely weakened. Unity on this subject is of paramount importance.

For instance, if you believe that it is important to pray with your partner, to be involved in the life of a church, and to raise your children with a deep appreciation for the Lord —and your partner says “no thanks” to all of these, look out!

There is little encouragement for the marriage from family and friends.

I always ask couples what their friends and family think of their relationship. I seldom find a situation in which there is little support for the couple, and yet they seem in other ways to be well-fitted for each other. Exceptions do occur, of course, but not often.

The fact is that every couple badly needs all the help they can get to make their relationship a quality one. If they aren’t getting that help from the people closest to them, I get concerned. If no help is forthcoming, they must have almost everything else about their relationship in near-perfect shape. And if everything else is in such terrific shape, why aren’t their friends and family more enthusiastic?

Even though we are a long way from being able to select mates scientifically, we have made a lot of headway in understanding what makes marriage selection successful.

In the simplest of terms, what we know to be necessary is this:

• You and your partner must have an excellent fit now. It’s not to be “later when everything gets wonderful after we are married.”

• The two of you need to have the skills that make adjustment possible as you deal together with the inevitable changes of life.

• And at the bottom of everything there needs to be the kind of deep commitment to one another. This is a commitment that will get you through the tough times when the necessary adjustments are waiting to be made.

These three qualities —good fit, well-developed adjustment skills, and solid commitment —will make for long-term marriages that provide stability for many generations.

This article comes from the book, Finding the Love of Your Life, written by Dr Neil Clark Warren. It’s published by arrangement with Focus on the Family Publishing by Pocket Books. Unfortunately, this book is no longer being published. It gives insights into questions such as: What are the 7 danger signals for a couple considering marriage? Do opposites attract for a lifetime? What critical differences and similarities make or break a relationship?

One response to “Getting It Right to Provide Stability in Marriage”