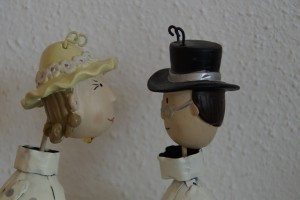 Have you ever looked at your partner across a room and known exactly what he was thinking? Is that how you relate to each other after the wedding? Jack and Carole Mayhall say that just looking at each other can develop intimacy in a couple:

A way to develop the climate of intimacy in our relationship is by frequent glances at our spouses. This is one way to tell if an engaged couple is really in love with each other. Every joke, profound remark, or inane statement is a cause to glance at the other and share a look. Sadly, most couples begin to lose this eye contact after they’ve been married only a few months.

If you have grown less frequent in the deep, long, intimate looks or the quick, let’s-share-this-look, talk about it. Then begin to glance at each other often when in group discussion (or even watching television). If the other doesn’t glance back, give a nudge (if you’re close enough) and soon you may again enjoy the warm feeling of sharing these intimate moments.

Most women need a lot of affection. I’m sure I’m not the only woman who has wished that we were as affectionate now as we were while we were dating. Kathy and Larry Miller wrote about this in their book, When the Honeymoon’s Over.

After the wedding, who in their right mind would prefer holding hands to making love? I believed affection before marriage was just the means to getting the “real stuff” later. I believed somehow sex would replace the inferior hand holding. However, over the years I’ve learned to enjoy giving Kathy the affection she needs and deserves.

Of course, Toben is not the only one in our marriage who can give affection. I can too! As I crave affection, I’ve started to hold his hand more when we’re driving in the car or taking a walk. Consequently, he has started doing the same in response!

During our dating years, the time that we did have together was intensely focused on being together. We were so in love and wanted every moment together to count. I remember great conversations, walks around campus, time at the lake, and late-night trips to Safeway for ice cream. Also, most of the time we couldn’t keep our hands off each other.

After we were married the distractions started to creep in. There were “things to do around the house.” And I think we started to take for granted the time we had together. It started to get too easy to sit in front of the TV together or rent a movie.

The reality is that the more we took our time together for granted the more we suffered relationally. Every once in a while, tension would build up until something (or someone) snapped. Both of us would realize after talking it out that we needed to spend some “quality time” together. We would really focus on each other for a while. We would take walks, go to the lake, or sit on the couch and talk.

But before long we would fall back into those old, lazy patterns. That cycle continues to repeat for us today. For the most part we catch it before it gets critical. We then adjust to focus more on each other, but it requires constant mindfulness. Filling up the car with gas just isn’t enough.

Joanne knows that when I do that it’s my way of saying “I love you.” But I need to say “I love you” in ways that are more meaningful to her. And the only way I can be sure I’m doing it right is to ask her. Even after being married for a few years, there’s just no substitute for my asking, “What would make you feel loved?” Usually her answer is something incredibly simple like, “Come here and kiss me.” So it works out well for both of us!

Let me brag about my husband for just a minute. Toben loves me. You know how I know? Not just because he tells me, but also because he tells everyone that he loves me. Just yesterday, he came home from running errands with a friend. “I love you, Joanne,” he said. “And I told Kevin all about how much I love you.”

Occasionally I travel with Toben on business. When I meet people he has worked with, they always comment on how much Toben loves me and how wonderful he thinks I am.

In the New Testament, James has a lot to say about the power of words. This verse especially stands out to me: “Friends, don’t complain about each other. A far greater complaint could be lodged against you, you know” (James 5:9).

His command is simple: Don’t complain about each other. Toben never complains about me to other people. I wish I could say the same is true for me. But it’s so easy to complain. I couch it in humor, laugh while I say it, but it’s complaining nonetheless. “I just don’t understand it.” I say to another mother. “Toben hears Audrey wake up from her nap and just sits there. I’m determined not to get up —I’ve been with her all day. How can he not understand that it’s his turn to take care of her? Is he deaf?”

Use Words to Build Up

I was visiting with some friends recently and one of them recounted a conversation she’d had with her husband. Filled with profanity, tinged with bitterness, and laced with sarcasm, it made me cringe. I’ve never met her husband. I’m sure he isn’t the man she described him to be, but that’s what comes to mind whenever she mentions his name.

How often do I do the same? Do I often complain about something minor that colors someone’s view of my spouse? How often have I spoken when I should have been silent? How would I feel to have those words come back to Toben?

Earlier in his letter, James described how words can come back to haunt us.

A bit in the mouth of a horse controls the whole horse. A small rudder on a huge ship in the hands of a skilled captain sets a course in the face of the strongest winds. A word out of your mouth may seem of no account, but it can accomplish nearly anything —or destroy it!

It only takes a spark, remember, to set off a forest fire. A careless or wrongly place word out of your mouth can do that. By our speech we can ruin the world, turn harmony to chaos, throw mud on a reputation, send the whole world up in smoke and go up in smoke with it, smoke right from the pit of hell (James 3:3-6).

The smallest words can do huge damage. Words about our spouse can throw mud on the reputation that doesn’t easily wash off.

Remember that communication is affected by a huge variety of things. This includes your surroundings or the time of day (Toben and I have had a number of conversations late at night that I don’t remember in the morning) to past experiences and body language.

Spend time talking together about how you communicate. Pray that God would use your words to build up one another and to express how much you love and care for each other.

This article comes from the book, Happily Ever After: A Real-Life Look at Your First Year of Marriage, written by Toben and Joanne Heim, published by Kregel Publications. This book is divided into 8 chapters — each one dealing with an area of marriage that can be a source of unmet expectations during the first year (particularly for those living in the U.S.).

One response to “How You Relate After The Wedding”