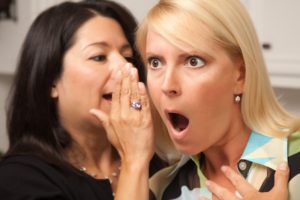 It seems like everywhere you turn, husband and male bashing is a common thing today! It’s not uncommon to hear women talking horribly about their husbands. They talk about what their husbands DID do that exasperated them. They talk about what they DIDN’T do that also made them flustered. And that wouldn’t be so bad if that’s all there was to it. After-all, as human beings we DO frustrate each other. But when it goes beyond that first step, it’s a problem.

It can seem “fun” at the moment when you’re with other women to make “sport” of a husband who aggravates you.

The conversation usually starts out somewhat innocent. But then it goes into the direction of: “what was he thinking when he did (or said)…?” And often it doesn’t stop there. It spirals down into demeaning and making fun of him as a man and/or a husband.

I’ve listened to and have been in on some of those conversations. Very regrettably in the past I have even participated in the fervor of the moment with other women.

Talking together as women who need help and empathy from other women to get through a situation with their husbands is one thing. But husband bashing is an entirely different situation.

The “talking together as women who need help” falls into line with Titus 2 and also Ephesians 4:29. But husband bashing doesn’t. It tells us in the Bible,

Some women say it’s all innocent. They’ll say they don’t mean anything serious by it. And after-all, “if you don’t laugh about it, you’ll probably cry.” And that may be true. But it’s different when it goes over the line.

And if we’re really honest, we know where that line is to be drawn. We know whether something we say about a husband is “helpful” or not. We also know whether or not it’s “wholesome” to those who listen.

That’s the issue Ida Rose Heckard wrestled with. She finally came to some important conclusions. The question for ALL of us to consider when we are involved in male bashing, “is it trash talk or harmless humor?” After going through a time of self-examination and prayer, Ida realized some things. She relayed them in a Today’s Christian Woman article, titled “Male Bashing.”

Here are a few of the many things she points out:

I didn’t realize how much I’d bought into negative stereotypes about men until one day, early in my marriage, when my husband, George, returned home in the midst of my annual holiday cookie baking. I thought to myself, Watch, just like a man, he won’t help a bit, but he’ll be happy to eat the goods.

Leslie desired a family but at thirty-four was still single. Her struggles with difficult male coworkers left her fearful she could never live with a man. She and I often commiserated over tea in the cafeteria. Although we enjoyed the camaraderie, I began to see that I was helping to solidify her fears.

Because it’s essentially gossip, male bashing undermines trust —the foundation of relationships. And it makes it difficult for men to be vulnerable. Jeff, a church friend, once admitted to me that he avoided committees on which a particular woman served. This is because she often used her husband’s weaknesses as amusing anecdotes.

Initially, I was amused to hear my five-year-old son tell a baby sitter we have four children in our family. He included himself, his brother, his sister, and his father. But I was embarrassed when I later learned he’d merely repeated my own words. As my son and I talked, he asked me, ‘Mommy, what do you say about me? ‘ I realized when my children hear me belittle their father, they question their own security.

• “When we recklessly criticize someone based on gender, we inevitably insult our Creator as well.

Male bashing distorts our view of God. In 1995, as I battled ovarian cancer, I was forced to examine my deepest beliefs about God. I desperately needed to understand his character and his nature. God created us in his image, male and female. Whenever we recklessly criticize someone based on gender, we inevitably insult our Creator as well. Such carelessness erodes our appreciation of his character and thus our ability to trust him. I came to a place in my life where I couldn’t allow anything to interfere with that trust. When I saw what male bashing did, it had to go. “

That’s true of all of us. It is toxic talk. There is nothing toxic about it and we know it.

To explore this further, there is a link below to an article that has helped me in positive ways. I hope you will find it helpful to read also:

Sometimes in trying to cope with negative marital situations, we add our poor behavior upon what we believe to be their poor behavior.

Please don’t allow yourself to believe the lie that because you hurt so badly, solutions to do that which you should not, are acceptable. They are not. Wrong is wrong, no matter who started it. This is not to excuse bad choices our husbands may make, but that does not give us the license to make bad ones, as well.

Please prayerfully read through and consider the advice given in the following article:

• WHY WE SHOULDN’T BAD MOUTH OUR HUSBANDS

Cindy Wright wrote this blog. f you have additional tips to help others, please “Join the Discussion” by adding your comments below.

12 responses to “Husband and Male Bashing”