“The main way to resist the forces that pull us apart —the natural drift of marriage over time and the pull of the consumer culture —is to be a couple who carefully cultivates commitment and ways to connect over the years” (William Doherty). 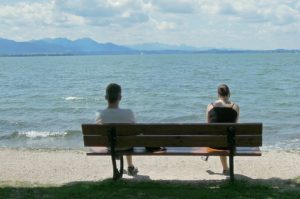 If we’re going to “be imitators of God as dearly loved children and live a life of love, as Christ loved us and gave himself up for us” (Ephesians 5), it will take intentionality to strengthen our love so it imitates and reveals the love of Christ —especially as it pertains to our marital relationship.

Marriage is intended by God to be a visible picture to the world of Christ’s love for the church. As we show love to our spouse, we demonstrate to others of the love God has for them.

With this in mind, we’ll expand on last week’s subject on having an intentional (pro-active) marriage as explained by author and professor, William Doherty. In a speech Dr Doherty gave at a Smart Marriages Conference a number of years ago, he answered the question, “What is Intentional Marriage?” by saying:

“In this era, if we’re not intentional, we’ll become an automatic pilot couple. What I mean is that the natural flow of marriage relationships in contemporary life, with our crammed schedules, endless tasks, kids to care for, and the ever-present television media is towards less focus on the couple relationship over time, and therefore towards less connection, less spark, and less intimacy.

“To grow closer over the years, you have to be mindful and intentional not only because of the pace and distractions of life, but also because of what research has shown is the loss of intensity that occurs from daily living over many months and years.

“We seem to go on ‘automatic pilot,’ and focus on other things. That happens even before we have kids. But after we have children, the current gets really swift. With new babies, our first priority is naturally the care of a creature that has been programmed to get our attention. And our second priority is self-care. We trade off child care so that we can get some individual “down” time.

“We end up borrowing on [or taking away from] our marriages, not just for a short time but for a long time. We borrow on each other’s good will, time, and energy in order to do our job as parents and in order to have down time for self-care. We evolve good parent-child rituals, but we lose our marital rituals.

“And so, our marriages go on ‘automatic pilot.’ During courtship the relationship is front and center in our lives. When we get married, and particularly after we have children, this reverses: other things —the children, our work, our hobbies, our religious involvement —become front and center and the marriage relationship moves to the background.

“The antidote [or cure] to becoming an ‘automatic pilot couple’ is to be an intentional couple who cultivates rituals over the years.

“This matter of significance is what distinguishes a ritual from a routine. A marriage routine is something that you do over and over in a coordinated way, but that doesn’t have much emotional meaning. You can have dinner together as a couple every night, while one of you watches TV and the other reads the paper. This is probably a routine because it lacks emotional significance.

“Of course, one couple’s routine might be another’s ritual. I have a friend and her husband who are very busy. She told me about the mundane activity she and her husband do every Saturday that helps her feel close to him: they do errands.

“For them, this is a ritual of connection. If they did their shopping efficiently, they would divide up. But rituals aren’t about efficiency; they’re about connection. So my friend and her husband do errands together and talk along the way.

“I know a couple who, when they watch a favorite TV show, sometimes take turns giving each other a shoulder rub, with one sitting on the floor and the other on the couch.

“Almost anything can be turned into a ritual of connection, if the focus is on the relationship. Some couples check in with each other by phone a couple of times a day. It’s only a ritual, though, if both of them know it’s a connection time. If just one person likes to call and the other person says, ‘Yep, I’m busy; I’ll talk to you later,’ this isn’t a ritual, because it’s not emotionally significant. Both people have to be into it.

“Examples of rituals include good-byes in the morning, greetings in the evening, and going out for coffee and conversation. I talked to a woman who said she and her husband always say ‘I love you’ when they part in the morning, because they never know that they’ll see each other again. Working in the garden together can be a connection ritual.

“Intimacy rituals include dates where you’re going out to have some special time together, and special occasions such as anniversaries or Valentine’s Day. By the way, I think anniversaries are the least intentionally celebrated ritual in the American family. You ask most people about their anniversaries, and they respond sheepishly that they don’t do much for it.

“But anniversaries are really the birthday of our marriage, and we tend to let them go without much ritual.”

In his speech, William Doherty goes on to tell of different rituals he and his wife ,as well as numerous other couples, have put into their marital relationships to make emotional connections with each other. We encourage you to read those, plus others, which are posted on an archived site for the Smart Marriages web site, by clicking into the following link, “Marital Rituals.”

May God greatly bless your marriage as you apply what you have learned. May we always strive together to be “Intentional Married Couples.”