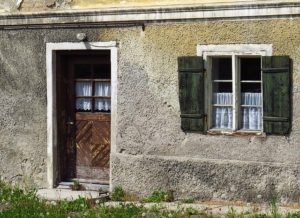 Yesterday I went to the front door early in the morning to open it up so I could let some fresh air come through the house. I love those fresh air opportunities. But I was horrified at what I saw. Just outside the door, there was blood splattered everywhere —quite a bit of it. It looked like something had died, or had been killed there. Some of the blood was in droplet form —even splattered, and some was smeared in as if something had rolled in it.

Upon closer examination, it was obvious that there was a struggle that had been involved. And yet there was no fur or feathers anywhere to further explain what could have happened. There was also a small blood trail, eventually dissipating down our driveway.

All that my husband Steve and I could think is that some coyotes (we live in the Southwest) had cornered an animal on our porch. We supposed it had killed it there—carrying the body off. I was mortified to think that something this horrible had happened right outside our front door.

But then I saw something that explained it all. It filled in the pieces of this mystery. What I came to see is that sometimes, life and death can happen right at your doorstep and you don’t even realize it.

I had thought that the death of something had happened at our front door. But then as I looked around for further for evidence of fur or something, I saw, in the middle of the street, the body of a small animal. As I slowly and woefully (because I love animals) approached the small body, I noticed that it was still moving.

I yelled out to my husband to come help, because this animal was still alive. Upon closer examination, it was a baby Javelina. (This is a type of boar that runs loose around here.) I didn’t know what to do. The thought of an animal suffering like that was horrible. But then as I looked further, I realized that it wasn’t torn up at all. Obviously, an animal hadn’t attacked it. There was no blood anywhere around. And then I saw it. This baby Javelina was a newborn. The umbilical cord was still attached.

The Struggle Made Clear

What my husband and I finally realized is that the struggle at our front door wasn’t a death scene. It was one of new birth. A mother Javelina had given birth at our front door. How many babies she had birthed, we don’t know (there was a lot of blood). It was obvious that the little one lying in the middle of the street wasn’t able to walk any further after being born. It had dropped there, and was now abandoned.

My husband called the police. They came out and concluded the same thing we did about the birth scene at our front door. As we gathered around this baby Javelina, she (or he) started to move about more. It was lifting his or her head in response to us. One of the female officers found a blanket to scoop it up into. She then called ahead to an animal rescue center, reporting that she was bringing this little one to them. Death turned into life for us, right before our eyes.

On a parallel plain, something was happening on our web site overnight that I didn’t realize either. It was new life that began and is now being infused into a marriage because a husband’s eyes were opened. Thankfully, he now “gets it.”

Let me explain. When I wake up every morning, one of the first things I do is to check the web site. I look to see if there are comments that need approval and then posting. Sunday morning, there was one that particularly spoke in a profound way to me/us (my husband Steve and me). It was under the article, “100 Ways to Show Love to Your Wife HER Way.”

The comment came from Josiah from the Philippines. He who wrote:

“I love my wife. We’ve been married for 6 years now. I thought I was already good enough for her. After reading this article, it made me think that I wasn’t really doing a great job in loving her. All this time I was doing things to feed my own gain and habits, which I thought pleased her and maybe the reason why we argue at times. I hate myself for that…

“This will be my mission to try and make a change, and show love to her without expecting anything in return. Thanks to everyone who made this noble effort to help people like me who were blinded but now enlightened.”

To that I say, THANK YOU JESUS!!! The enlightenment Josiah received from the Holy Spirit, our “Wonderful Counselor” is one of the main reasons we do what we do for the ministry of Marriage Missions. It is to participate with God in helping marriages reveal and reflect the heart of Christ. To those who don’t know Christ, the mission is to reveal the heart of Christ. To those who do know Jesus Christ in a personal way, it is to help them to reflect the heart of Christ within their marriages. That way, as others see their lives, they may want to know their Jesus better.

Other God at Work Opportunities

Now, please let me explain another parallel from the hopeless to hopeful situation. You know, we all go through times of discouragement. Last week had been one of them for me. Saturday night, I fell into bed asking God to help me deal with my emotions. I prayed for God to give me the strength I needed for the next day, and a blessing. Yes, I asked for a blessing. I asked God to renew my strength and hope.

As I’ve explained in other blogs, we took my brother into our home to help him after he became homeless at the end of last year. This is because of catastrophic health issues. (The article, This isn’t Fair, explains this a bit.) It has been a series of working with wounds, sores, blood pressure ups and downs. Also, it has been about severe health issues, oxygen tanks, doctors, hospitals, hospital tests, numerous medicines to sort through and give out, and so on.

Since January it has been one thing after the next that we’ve all had to deal with, concerning his health and survival. It has stretched us WAY outside of our comfort zone. But every day, we deal with whatever comes up. God has been faithful in helping us all along the way. But it has all come at a big price on so many levels, that I won’t even go into.

Suffice it to say that it has been tough. But we’re all making it, one step at a time. And truly, we are thankful. Yet, all of this has been happening at a time when Marriage Missions is growing at an exponential rate. We’ve had more people visiting the web site (an answer to prayer) than we ever dreamed possible before. And the number of emailed Marriage Messages continues to multiply each week, as well.

With all of this, there is of course, more work that has to go on behind the scenes than ever before. And amidst of all of this, life is still happening. We have other family matters to deal with, and more. When you put on top of all of this, all that is going on with my brother and the growth of the ministry, we’ve been MORE than a bit busy. I’m not writing this to complain, but rather to explain how God blesses in ways we don’t expect.

This past week has been especially traumatic and busy —especially with the ministry. I worked more hours than I care to count. And some of the emails and comments on the web site have been really tough. There are so many people going through horrible things, and even complaints that we aren’t doing enough. Not only was I tired from trying to keep up with everything here, but overwhelmed by the responsibility, and gravity of it all.

When I fell into bed on Saturday night, I felt that I had spent all that I had. I was tired beyond words, and discouraged. I asked God for a blessing and He sure delivered.

As I told my husband Steve, when I woke up and discovered what I thought was a death scene had turn into life, it was great. And then I was able to rescue a little one who would surely have died. I then saw the comment that one husband left on the web site —of new life and new actions of love being infused into a difficult marital situation. These opportunities all transformed my energy level. I wouldn’t have guessed it would happen as it did. But God knew what it would take to infuse new hope and energy into me. Thank you Jesus!

So, if you are feeling tired and are lacking hope in your marriage situation, please take heart. God cares. He is able to help you and minister to you in ways that you may never have thought of before.

If you’re tired and feel hopeless, do as Jesus said, “Come to me, all you who are weary and burdened, and I will give you rest. Take my yoke upon you and learn from me, for I am gentle and humble in heart, and you will find rest for your souls.” (Matthew 11:28-29)

9 responses to “Opportunities at Our Doorstep”