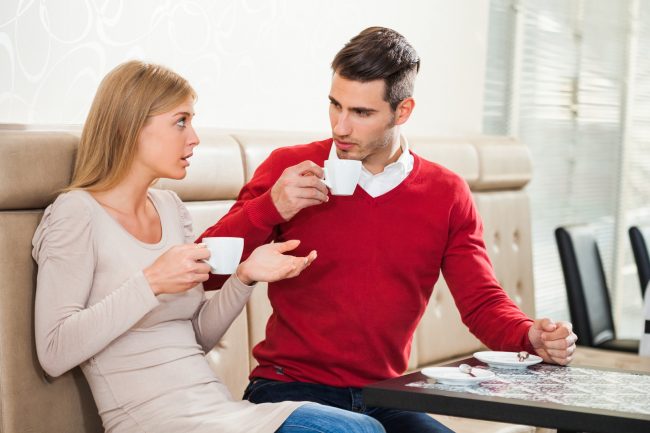 After 30+ years of marriage, I’ve discovered some of the secret passageways between women’s words and men’s ears. The following four communication techniques have helped my husband and I understand each other —demystifying some of our differences.

I tend to think aloud. I use my words to help me sort out my thoughts and decide how I feel about something. Sometimes I don’t want a solution. I just want to “vent.”

For some reason this makes my husband, Ron, uncomfortable. That is because he wants to fix it, forget it, and move on. I like to take a long, hot bath in my problems before I even think about solving them.

When we were first married, we moved into a new neighborhood and began attending a new church. I was almost friendless because I was shy. I was waiting for a warm and wonderful woman to approach me with a sign on her forehead that read “Friend of Nancy’s.” She hadn’t yet appeared. So I wanted to share my feelings with Ron, “I’m lonely. I wish I had a girlfriend.”

Ron, with the best of intentions, started to help me solve my problem. He gave me a lecture titled “Friendship 101”: In order to have a friend you must be a friend. What have you done to be friendly? Then he got out a legal pad and a wide-tipped Sharpie and wrote in block letters, “Nancy’s Friendship Goals.” Next, he started to draw a flow chart. He was befuddled when I started to cry and said, “I don’t want a diagram. I want a friend!”

Now if I just want to vent, I tell Ron ahead of time. He’s even learned to ask me, “Do you want my advice or just my ear?” What a guy. I think I’ll keep him!

Many couples tease each other. And if you can keep it friendly, it might be fun. If, however, your humor is at someone else’s expense, it’s too costly. My husband is a funny guy. When we met, he was performing stand-up comedy in Los Angeles clubs. He even took joke-writing classes from professional comedians like Steve Martin and had a one-on-one lesson from Bill Cosby.

He was always looking for a laugh. So when I ruined a meal or gained weight, he thought of it as new comedy material. I thought his comments were insulting and cruel. We had some of our biggest fights about his definition of humor. After I explained how much it hurt me, he stopped making my butt the butt of his jokes. He’s still funny, and we often write comedy scripts for Christian plays. But now, we share the same rule: cruel personal insults are not funny.

A few years ago, I hit on a principle that’s saved us from hundreds of misunderstandings and arguments.

One afternoon, I was frantically cleaning the house for our son Nick’s birthday party. Ron was sitting in the den reading the newspaper. “Will you please pick up those papers,” I asked, “and sweep the front steps? They’ll be here soon!”

“Uh…” he grunted, without looking up.

“I’ll take that as a yes,” I shouted as I sprinted upstairs to fix my hair and make-up.

Twenty-five minutes later, I looked out the window, and saw a guest’s car in the driveway. “They’re here!”

I heard Ron bustling around in the den as he jumped up from his chair, shoved the papers into the wastebasket, and zipped to the front door with the broom. He was sweeping the porch steps as our guests walked up the sidewalk!

He had no idea why I was upset. Later, when our guests left, I said, “Why didn’t you do what I asked you to do?”

“But you did it when our company was in the driveway!”

He was right—I didn’t. I had the expectation that he’d do it as soon as I asked, but I wasn’t specific on my time-frame. Here’s a news flash. Your spouse can’t read your mind!

Now I ask, “Can you do this by 6:00?” or “Will you be able to have this done by Tuesday?” If he can’t do it, he’ll tell me, and then I can either do it myself or make other arrangements.

Another way I drove Ron crazy was to hint at something and then throw a fit because he didn’t “get” the hint. For example, one warm, sunny day as we drove by a Baskin Robbins Ice Cream store, I said, “I love lemon sherbet.”

He just kept driving. I guess he didn’t know that my hint meant, “Stop the car. I want some ice cream!”

My girlfriend Tonya would have understood the hint. She would have said, “Good idea. Let’s get some!” But Ron was oblivious. He thought I meant just what I said. He took women’s words (mine) literally.

Men rarely hint because they’ve learned to ask for what they want. If women would stop the “hint-speak” and ask for what we want, we’d be much more likely to get it.

These changes didn’t take place overnight. I think the issues related to teasing took several years to resolve. If I can see that Ron is making an effort, then I give him some room to fail occasionally. If I went “postal” on him each time he forgot, he’d get discouraged and stop trying.

So as you see your mate start to develop new positive patterns, encourage him or her. And be willing to overlook an occasional slip. Be sure to verbalize your praise and notice when your spouse does it right. Your marriage will grow sweeter as you have less conflict and more understanding and patience.

“Husbands, likewise, dwell with them [wives] with understanding.” (1 Peter 3:7)

The article above is adapted from the great book, Avoiding the Greener Grass Syndrome: How to Grow Affair Proof Hedges Around Your Marriage

written by Nancy C. Anderson, published by Kregel Publications. This book was written by a woman who strayed to the other side of the marital fence —and returned to find forgiveness and restoration.

Nancy C. Anderson is an award-winning author and speaker who loves to teach women and couples how to avoid the “Greener Grass Syndrome.” Nancy and her husband Ron teach at marriage seminars and banquets. If you live in the United States and would like them to speak with your group please contact them at RonAndNancyAnderson.com. You may also want to visit their blog at Joyfulmarriage.blogspot.com.