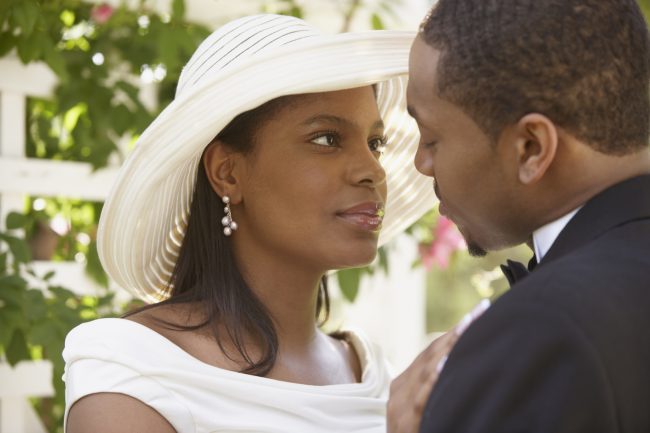 We’re not sure if you read the news story concerning these three unforgettable words. (We almost missed the story ourselves, because it was buried amidst other news that wasn’t as important.) But here’s the title of that story that caught our attention: “A Husband’s Confession: The Three Unforgettable Words My Wife Said at Our Wedding.”

Can you think what those three words would be? We guessed, but we were wrong. And yet Joshua Rogers (the husband) was right in thinking they are unforgettable words. They’re also extremely important. Here is what he wrote:

“While I vividly remember many moments from my wedding day, there’s one moment that still moves me. I hope it always does. We had an Anglican wedding ceremony, which has a lovely script, but it doesn’t allow for much creativity. Our pastor did make one exception, however. Before we said our vows, he let us share the testimony of how God brought us together.

“Despite Raquel’s nervousness about talking in front of a large crowd, she did it calmly and confidently. And when she finished telling the story, she looked at me and said three words that have stayed with me: ‘I’m trusting you.'”

WOW! Impactful words, aren’t they? But isn’t that essentially what we all are inwardly saying to our spouse-to-be on our wedding day? Aren’t we inwardly voicing in our hearts that we trust him or her to follow through with the vows that are being said?

After eight years of marriage, Joshua writes, “I still want to be that man she can trust.” He then tells of some of his weaknesses as a spouse. Then he writes,

“I’m not abandoned to my own devices though. As the Bible says, ‘Thanks be to God who always leads us in triumph in Christ.‘ (2 Corinthians 2:14) My job as a husband isn’t to become something I’m not, but to submit myself to Jesus and let Him grow me into a man who is more like Him.”

Jesus is Someone we all can trust. Looking to Him, if we said, “I’m trusting you” He would probably say, “I’ve got this one. You can rest assured that I’m trustworthy. I always have been and always will be.” And He is. We can trust Him to keep His vows to love and care for us.

Can our spouse say this about us? Are we trustworthy with his or her heart, feelings, and in the way we act —both behind the scenes and out in the open? God is our Father-in-Law who is entrusting His son or daughter with us. Are we looking to Him to daily guide us to be His colleague in loving our spouse?

Here is a link to a video titled, “The Most Touching Speech Made by a Bride’s Father to the Groom.” It brings to mind a father’s heart, concerning trusting his daughter to another man:

Trust worthy, Even So…

Even if our spouse fails us, do we still follow God in being faithful and worthy of trust? We’re told in Philippians 2:5-8:

“Have this attitude in you, which was also in Christ Jesus, who, although He existed in the form of God, did not regard equality with God a thing to be grasped, but emptied Himself, taking the form of a bond-servant, and… being found in appearance as a man, He humbled Himself by becoming obedient to the point of death, even death on a cross.“

Please join us in this mission —living with our spouse in a way that shows we can be trusted. “May the Lord direct your heart into God’s love and Christ’s perseverance.” (2 Thessalonians 3:5)