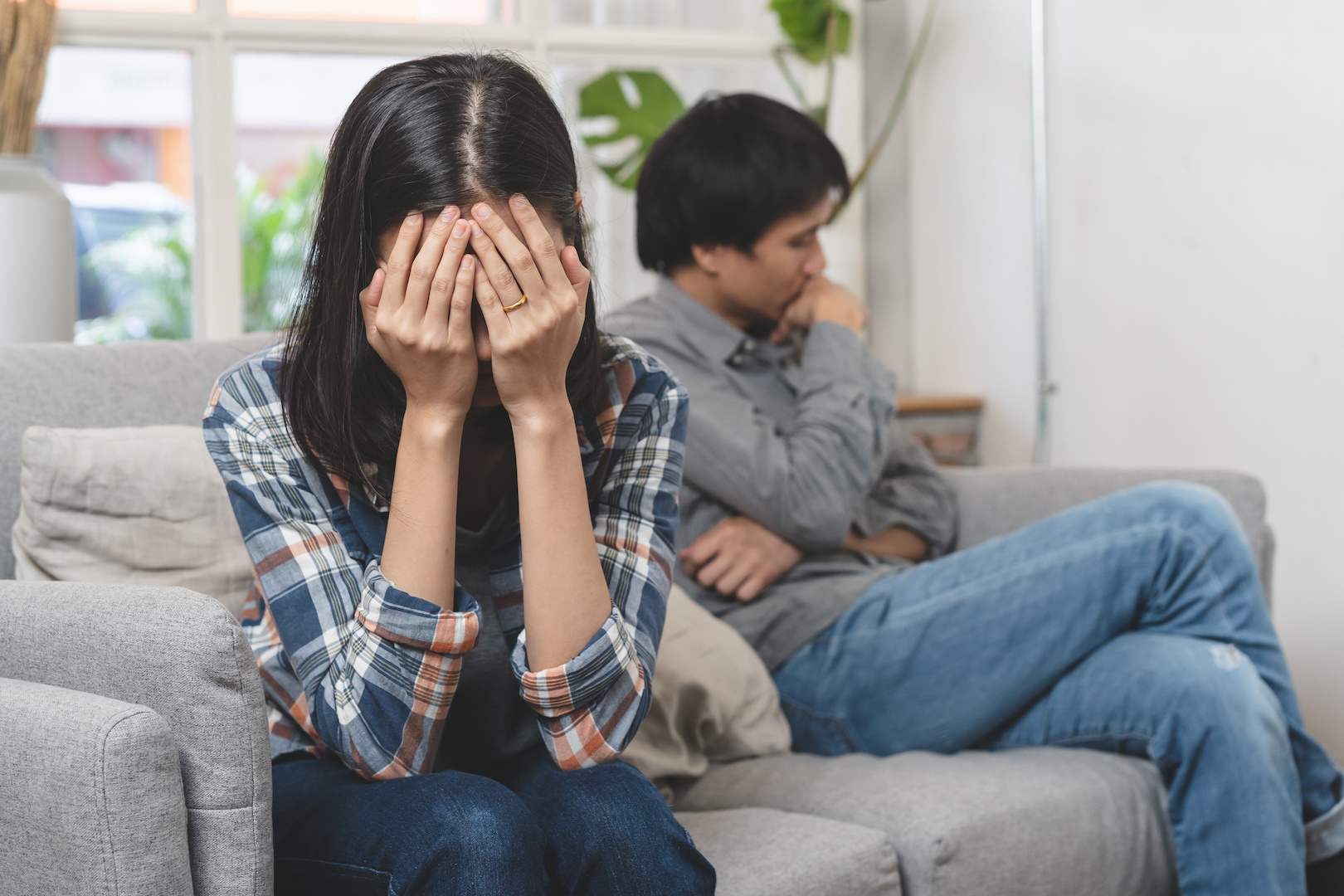 There was no hope in his eyes as he faced me. “She walked out on me,” he said. “She just called me at work one day and said, ‘I’ve had it. I’m leaving.'” He tried to control the tremor around his mouth. “I realize now that much of it was my fault. I guess she tried to talk to me before this. …”

As I listened, I realized the truth of what he’d said. She had tried to tell him. When their son was born, she hadn’t wanted to go back to work immediately. But he pressured her, telling her that they needed her income. She nagged some and later grew severely depressed. But he didn’t think her depression had anything to do with him or with being away from their son.

She Tried to Talk

Actually, that wife had pushed every button she had available to make him listen to her pain and anger. But he was oblivious to her inner cries. He worked two jobs so he wasn’t home much. But more importantly, even when he was home, he failed her emotionally.

Somewhere in time, she decided that the pain of divorce was more bearable than the hurt of being in the same house when they were emotionally at opposite ends of the earth. So she walked out. What she did wasn’t right, but I can understand it. It was probably a last desperate attempt to get her husband’s attention. She got it, all right, but it came too late.

I wonder how many broken relationships are due to a similar scenario. I wonder how many men are in the process this very moment of distancing their wives by failing to understand their needs. We’re talking about the need to be listened to, to have feelings and emotions validated by their husband’s concentrated attention and understanding.

Men Do Have Emotional Needs

It’s not that men don’t need emotional support and intimacy —they do, of course. I know some men who have as great a need for relating on an emotional, feeling, subjective level as any woman. They are often the counselors, those others turn to when in trouble, the pastor-shepherds. But as my wife Carole and I have listened to couples, we find that in the average marriage, it’s generally a matter of degree. And the women’s need usually seems greater. It is she who most often longs for soul-to-soul communication. She feels like she never quite has that desire met by her spouse. She needs to talk to him and have him talk to her in connective ways.

The following incident appeared in a recent article [in Readers Digest Magazine, “Why Husbands Won’t Talk”].

Judy, an artist, was worried about preparations for an exhibition. She started to talk to Cliff, her husband that she wanted his support and sympathy.

Instead, Cliff fired off instructions: “One, get all the artists together. Two, call your accountant—the expenses may be deductible. Three, check with the bank to see how much money you have. Four, contact the P.R. people.”

Judy felt rejected, and thought to herself: “Cliff doesn’t care how I feel. He just wants to get me off his back.”

Cliff believed he was being supportive. He had given her his best advice. But Judy was seeking emotional rapport, not problem solving.

Carole and I can relate to that! I have had to work on intimacy in communication all of our married life. It probably has to do with me being that logical, factual, objective kind of guy. I have to admit that by nature, I am a concealer of my feelings. In fact, if one side of a scale represented the ability to express feelings and the other side represented the need to conceal those feelings, Carole and I would probably balance the scales pretty well.

According to most marriage counselors, concealment is more often a trait in men, and it stems from various factors such as background, cultural expectations, perceptions of manliness, and personality. This tendency to conceal has drastic implications. James Collier says that most men think it unmanly even to admit that they have a problem —much less request aid.

Men in America feel that they ought to be able to deal with anything that comes along. They feel it’s an admission of failure if they’re having trouble. Some men would rather fail at their marriage or with their children than admit that something is wrong and seek a solution.

… Says marriage specialist Goldstein: “Men aren’t supposed to have sensitive, warm feelings or feelings of tenderness for the people around them—much less express them.” It is like the story of the old Vermont farmer 40 years married, who said, “I love Sarah Jane so much that sometimes it’s all I can do to keep from telling her.”

• They’re different in the number of and reasons to talk and ask questions.

A revealer is often full of questions and sees them as a way to maintain a conversation. They think, “If I don’t ask the other person won’t know that I care.” Questions represent intimacy and caring. But not to a concealer! Now questions can represent meddling. The concealer may be thinking, “Oh, no, you don’t! You can’t pry that information out of me. If I want to tell you something, I’ll tell you —without all your questions.”

• They’re different, too, in the nature of responses to communication.

A revealer may use encouraging sounds such as “uh-huh” and “hmmm” to encourage the other person. Then they feel ignored because the concealer utters so few of these acknowledging sounds. When I listen silently, Carole sometimes asks, “Honey, are you there?”

• They’re different in the use of what some call “oneness” words such as you and we.

A revealer may use many more of such words, as well as conversational bridges such as “Please go on —would you give me another example? …”

Can you identify yourself? As I’ve said, I tend to be the concealer, and —being logical as well —I have to say that often, logical men have logical reasons for concealment! I read of a group of men who were asked their reasons for not talking. Several of them gave fairly logical reason, such as simply not being in a talkative mood, or being tired and not wanting to expend energy talking, even wanting to protect the wife when she was tired and agitated and her emotional tank was near “empty.”

But others in the group answered in ways that indicated their concealment should not be accepted at face value. Listen to these reasons some men gave:

(1) Silence helps me avoid differences of opinion when we talk.

I grew up in a family that rarely expressed strong feelings. So talking is tough, especially when I know what I have to say isn’t what my wife wants to hear.

(2) Silence protects me when I don’t want to talk.

Sometimes I don’t want to talk to my wife about certain things because I’m afraid she will use them against me.

(3) Silence maintains a balance of attachment and freedom that feels comfortable in our relationship.

Sometimes I need closeness, but other times I need distance. I’m most content with our marriage when there’s a natural ebb and flow in our interaction.

If I don’t shoot off words, I’m less likely to catch crossfire or have to pick up debris when the battle ceases.

(5) When something is bothering me, I don’t talk because my wife tends to overreact and make matters worse.

The last thing I want is someone bouncing off the walls in anger or else sniveling about it.

Did you notice a similarity in these five reasons for silence? It would appear that most of these reasons are based on self protection or comfort, not on the intimacy of the marriage or the needs of the wife.

Now of course there are times when silence is good. But to constantly conceal our feelings is bound to stifle the intimacy and closeness that our marriages demand (and most wives need) in order for us to become truly one.

One counselor puts it this way: Wives think, “The marriage is working as long as we can talk about it.” Husbands think, “The relationship is not working if we have to keep talking about it.”

So we’re different. So one of us doesn’t talk much about feelings, and the other shares freely. Can anything be done?

Different Need to Talk About Feelings

A woman does not have to resign herself to living with an un-expressive male. Becoming fatalistic is not the answer, and I’m not talking about divorcing him either. Don’t listen if someone tells you “Don’t be so concerned about men not expressing their feelings. That’s just the way they are!” Men may tend to be that way, but they can change. Challenges or reproaches do not work. Carefully worded invitations can work.

But the revealer must be cautioned:

Mr. Wright also says that a man may finally open up to a woman only to find that what he reveals is discounted. It is shared with others, disbelieved, ridiculed, rejected, and even laughed at. Remember: safety, acceptance, and support are essential if a man is going to let down the bridge from his castle. He wants what he shares to be used for his welfare, not against him. Trust is a major issue.

This article comes from the book, Opposites Attack, by Jack and Carole Mayhall. It was originally published by NavPress (no longer being published). This book is aimed at turning your differences into opportunities and helping polar opposites turn into the best of friends. As they often say, “different doesn’t mean wrong —it just means different in the way you approach life. This is such a practical book and really gives a lot of helpful insights into how to get along better with each other.

The Silent Treatment Can Go Both Ways

Before closing this article we want to acknowledge that silent treatments can go both ways. Sometimes it is the husband who is silent, and other times it is the wife. The reasons are many, as to why they choose to be verbally non-communicative. (Sometimes it is because of abusive situations, immaturity, taking a time out, or just not knowing a better way to handle a situation. There are other reasons, as well.) But one thing for sure, prolonged silence, or misused silence can block healthy communication from happening.

To give further insights into how to deal with the “silent treatment” and how to resist giving it when it’s not a healthy thing to do, here are a few additional articles you can read:

We pray this helps you in some way. If you have a tip that can help others, please join the discussion below. We would be most grateful.

Leave a Reply to Johnny from United States Cancel reply