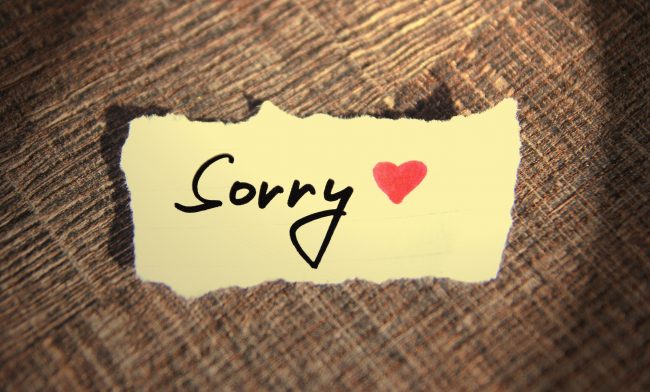 It’s important to know that apologies are not created equal. Just because you apologize, it doesn’t mean that the receiver feels you really “get it” as far as how much they have hurt you. As a result, they very well may reject your sincerity when you apologize.

The following is a case in point:

They were sitting in my office when the wife said, “I’d forgive him if he would just apologize.”

He responded, “I did apologize.”

“That is not an apology,” she responded.

Have your apologies often fallen flat? Do your spouse’s apologies connect and motivate you to forgive? Or are you married to someone who will seldom even try to apologize?

The above scenario as well as the questions was written and posed by Dr Gary Chapman. Have you been in the place that he just described? A LOT couples have been there. It seems that it’s just not as easy to know what the other spouse expects as far as an apology.

All of this seems simple enough, but many times, people just don’t approach matters the same way. As a result, their apology goes flat and it doesn’t register with the offended spouse.

Apologies That Make a Difference

First, here is something more that Dr Gary Chapman says about apologizing:

“After two years of research, Dr. Jennifer Thomas and I discovered that people have different apology languages. A person may be sincerely apologizing and yet, the apology isn’t perceived as sincere because it’s spoken in the wrong language. We discovered five distinct languages of apology.

• Expressing Regret: “I am sorry.”

“I feel badly that my behavior has hurt you so deeply.” This language identifies with the emotions of the offended party.

• Accepting Responsibility: “I was wrong.”

Name your mistake and accept fault. “I should not have done that. There’s no excuse. What I did was wrong.”

• Making Restitution: “What could I do to make this right?

How can I make amends to you? How could I restore your confidence in me?”

• Genuine Repentance: “I’ll try not to do that again.”

Repentance doesn’t make rash promises, such as “I promise I’ll never do it again if you’ll forgive me.” However, repentance does express the desire to change one’s behavior. “I don’t want this to continue happening. Help me think of ways I can change my behavior.”

• Requesting Forgiveness: “Will you please forgive me?”

This language expresses humility. “I realize I can’t restore this relationship alone. It will require mercy on your part, but my sincere desire is that you will forgive me and we can continue our relationship.”

Additionally, author, Janis Abrahms Springs, (from her book, How Can I Forgive You?

) gives the following practical advice when dealing with this matter:

On this same issue, the following is a “Question of the Week” that was sent to us by Smalleyonline.com:

Q: My wife is very sensitive and she says that I am not. She feels that my apologies are obligatory and not heartfelt. When I hurt her feelings, I want to make it right but often fumble over my words. How can I apologize and convince her that I mean it?

A: The following are just a few thoughts for crafting great apologies:

1. Put some thought into it.

“There is more hope for a fool than for someone who speaks without thinking” Proverbs 29:20 (NLT). The other person will know the sincerity of your apology by the amount of thought you have given to it.

2. Focus on her feelings, not issues.

Pick great, meaningful words. “Pleasant words are a honeycomb, sweet to the soul and healing to the bones” Proverbs 16:24. “Reckless words pierce like a sword, but the tongue of the wise brings healing” Proverbs 12:18. “A gentle answer turns away wrath, but a harsh word stirs up anger” Proverbs 15:1.

Sometimes in our apologies we can bring up three new issues as we try to make amends over one. “Fire goes out for lack of fuel…” Proverbs 26:20 (NLT). “Don’t talk too much, for it fosters sin. Be sensible and turn off the flow” Proverbs 10:19 (NLT). “A man of knowledge uses words with restraint, and a man of understanding is even-tempered. Even a fool is thought wise if he keeps silent, and discerning if he holds his tongue” (Proverbs 17:27, 28). “When words are many, sin is not absent, but he who holds his tongue is wise.” Proverbs 10:19

Hopefully these will help you move from repetitive and programmed to meaningful and heartfelt apologies.

A Question on Apologies Addressed by Gary Smalley:

Q: My wife says that I am one of the fastest apologizers she knows. She says the speed and repetition of my apologies voids the sincerity. She believes that when I say “I’m sorry” it is just to get out of a fight. I can’t win. Any suggestions?

A: Become a great wordsmith. Find new words and ways to say “I’m sorry.” When you use the right words, loving words, you change the atmosphere of your relationship. Proverbs says, “Pleasant words are a honeycomb, sweet to the soul and healing to the bones” (Proverbs 16:24).

Put some thought into your apology. Be specific. Instead of a simple “I’m sorry,” make it more of a complete sentence. “I’m sorry for snapping at you in the car earlier.” “I’m sorry for being late again. I’m going to try harder to get home on time.” “I’m sorry that I was an idiot earlier.”

When you give the reason for your apology you communicate that you understand the frustration. The hidden marriage manual in every woman knows when the apology is given to claim the hurt or to simply smooth something over.

We all need to learn to settle accounts quickly and do it with clarity of thought.

From Steven Stosny’s article, “How to Give a Sincere Apology” he gives the following tips:

The primary purpose of apology is to restore eventual (not necessarily immediate) connection. It is never to defend your ego.

1. Be contingent on your partner apologizing

2. Be tempered by excuses

4. Seek immediate forgiveness (Trust must be restored gradually, through behavior that demonstrates trustworthiness over time.)

1. Come from your core value and sympathize with the effect of your behavior on your partner. (Focus on what it meant to your partner, not on how you would have been affected by it.)

2. State how important your partner’s well being is to you.

3. State how sorry you are that you’ve done something to hurt your partner and/or break your connection.

5. If the offense is recurring, describe an action-plan to prevent future repetition of the offending behavior (which violated your core value to the extent that it hurt your partner or your relationship).

As far as apologizing, below is something you might not have thought of previously. Pastor Mark Gungor explains how men and women often approach apologizing differently. He writes:

“In my Laugh Your Way to a Better Marriage seminar I explain in detail how a man’s brain tends to compartmentalize things. It’s like men have separate boxes in their heads for everything: money, sex, kids, wife, in-laws, etc. And for a guy these boxes don’t touch. He thinks about one thing at a time and then moves on to the next thing since one box isn’t connected to another.

“These two very opposite ways of thinking and processing cause men and women to communicate in very different ways. There is one area this is particularly evident and often problematic —the apology. Because men have this unique ability to compartmentalize, a guy can go to his “apology box”, say he’s sorry for something he did, close that box and then move on to the next task or thing to think about. In his mind he took care of it. He said he was sorry. So it’s done and life goes on. But that’s just not so for a woman…”

• I SAID I WAS SORRY

With this in mind, below is a link to another article to read on the subject of apologizing. It is written by Christian Psychologist Phil Monroe, who answers the question:

• WHAT MAKES A GOOD APOLOGY?

And then Dr Gary Chapman gives even more info on what your spouse considers to be a good apology. We encourage you to read:

Additionally, you can obtain the book that Dr Chapman and his co-author Jennifer Thomas, wrote titled, The Five Languages of Apology: How to Experience Healing in all Your Relationships

And then lastly, Ellie Grant gives husbands a guide for apologizing to address your wife’s pain after adultery:

• HOW TO APOLOGIZE FOR BREAKING YOUR WIFE’S HEART

“A repentant spirit is a healing balm to breaking the cycle of blame in a marital relationship. The entire life of a Christian is one of continual repentance. Repentance is a prerequisite for reconciliation since a change of ways has to occur to heal grievances.” (Dr Randall A. Schroeder)

In closing, in light of all that was written, here is something to prayerfully consider:

“An apology is a good way to have the last word.”

If you have additional advice to help others, “Join the Discussion” by adding your comments below.

Filed under: Bitterness and Forgiveness Communication and Conflict

19 responses to “Apologies That Make A Positive Difference”