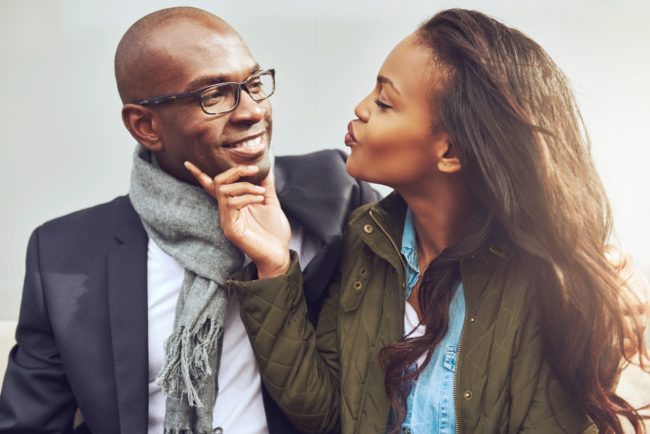 Have you ever noticed how the adulterous woman in the book of Proverbs seduces the unwitting young man? It’s not with sex (okay, it’s not just with sex); it’s with flattery. “She threw her arms around him. And with a brazen look she said, ‘I’ve offered my sacrifices and just finished my vows. It’s you I was looking for!’ …With her flattery she enticed him. He followed her at once” (from Proverbs 7).

Flattery is simply a seductive counterfeit for affirmation. As one marriage counselor told me, “Affirmation is everything. When a man is affirmed, he can conquer the world. When he’s not, he is sapped of his confidence and even his feeling of manhood. And believe me, he will, consciously or unconsciously, seek out places where he receives affirmation.”

Home is the most important place for a man to be affirmed. If a man knows that his wife believes in him, he is empowered to do better in every area of his life. Men tend to think of life as a competition and a battle. They can energetically fight it out if they can come home to someone who supports them unconditionally. They need someone who will wipe their brow and tell them they can do it. As one of our close friends told me, “It’s all about whether my wife thinks I can do it. A husband can slay dragons, climb mountains, and win great victories if he believes his wife believes that he can.”

Don’t tear him down!

If instead of affirming, a wife reinforces her husband’s feelings of inadequacy, it can become a self-fulfilling prophecy. For example, if we focus on our attention on what he is doing wrong in the relationship, we can unwittingly undermine what we most want—for him to do it right.

But I discovered a dismaying fact. Of the men I surveyed, only one man in four felt actively appreciated by his family. And 44 percent of men actually felt unappreciated at home. More pointedly, men in their prime years of responsibility for home, children, and work —men between their ages of thirty-six and fifty-five —felt even less appreciated.

I’ll bet the wives or girlfriends of these men would be surprised to learn that they didn’t feel appreciated. My guess is that most of us do appreciate our men but don’t show it enough.

If a man isn’t convinced that his woman thinks he’s the greatest, he will tend to seek affirmation elsewhere. He may spend more hours at work, where he feels alive and on top of his game. Or he may spend too much time talking to the admiring female associate. He may immerse himself in watching or playing sports, feeling the thrill of the competitive rush. Or he may retreat to his workshop or his home office. He may feel like he can control things there even if he feels inadequate and clumsy elsewhere.

“Why else do you think,” one man asked me, “so many men take sports so seriously? It’s something they feel good at, something they’ve practiced. They are admired and encouraged by other men on the field. People say ‘good hit?’ or ‘good shot!’ or show by tightening their defense that they know you’re about to smoke them. There’s nothing like that feeling. But I feel that same way at home when my wife applauds me for bringing in a big business deal. I also feel this when she brags to her friends about what a good father I am. It’s that same feeling.”

During my clinical research for The Lights of Tenth Street, several experts told me that a chronic lack of affirmation is one reason so many men slip into pornography addiction. For whatever reason, they feel like less than a man, so they seek —and find! —affirmation in pornography. As one man pointed out, “All those women in the men’s magazines convey one message: ‘I want you, and you are the most desirable man in the world.’ My wife may be nagging me at home, the kids may be disobedient, and I may be worried about messing up at work, but look at the woman in that picture makes me feel like a man.”

If affirmation is indeed everything, why should a man have to look for it in other places when he has a wife who loves and respects him? There’s nothing wrong with work, sports, or hobbies —it’s wonderful for him to feel alive and encouraged in those pursuits —but they shouldn’t have to be a retreat from an un-affirming home life.

Obviously, if many of our men spend their workdays feeling like they are always being watched and judged, it is no wonder that they want to come home to a totally accepting environment, where they can safely let their guard down. Men need a place where they can make their mistakes in peace and not constantly worry that they are one misstep away from being exposed.

If we don’t realize this and are perhaps too attentive to their mistakes at home, we risk creating a situation that is the opposite of what we want. Most of us want our men to be able to relax and truly open up to us. But in many ways, it is up to us to create the intimate, safe environment that makes that possible.

We may think that the adage, “his home must be his haven” is antiquated and unnecessary these days, but that is far from the truth. In fact, as the workplace has gotten harsher and less loyal, more demanding and less tolerant of mistakes, I’d say it’s even more important that a man’s home be a haven. Most of the men I talked with crave a retreat from the daily pressure of always having to perform.

The gift of confidence

I heard from many men, “Men put a lot of pressure on themselves.” On the survey, one husband pleaded, “I want my wife to know and understand my weaknesses, failings, short-comings, and still want me. I need her to be my number one source of encouragement to become the man God created me to be.”

We might think we wouldn’t have the ability to change our man’s feelings of workplace inadequacy. We would be wrong. By staunchly supporting our men, showing that we believe in them, and providing an emotionally safe environment to come home to, we can help give them at least the emotional confidence they need to dive back into the daily workplace fray.

In his autobiography, Jack: Straight from the Gut, Jack Welch, the famous chairman and CEO of General Electric, provides an insight for businessmen that is important for every wife —and mother —to hear.

Speaking about his mother, he wrote:

Perhaps the greatest single gift she gave me was self-confidence. It’s what I’ve looked for and tried to build in every executive who has every worked with me. Confidence gives you courage and extends your reach. It lets you take greater risks and achieve far more than you ever thought possible. Building self-confidence in others is a huge part of leadership. It comes from providing opportunities and challenges for people to do things they never imagined they could do —rewarding them after each success in every way possible.

A wife can give her husband that confidence (just as, hopefully, a husband can for his wife). It’s not about being the supportive “little woman.” It’s about realizing that despite their veneer of confidence, our husbands really do “carry their treasures in fragile containers.” They crave our affirmation for how they did on that play. Also, it’s about sending the man we love into the world every day —alive with the belief that he can slay dragons.

This article comes from the book For Women Only: What You Need to Know about the Inner Lives of Men

—written by Shaunti Feldhahn, published by Multnomah. This is a GREAT book to help women learn about what motivates men and their thought processes behind their actions (or non-actions). Shaunti had interviewed over 1000 men in researching this book. As a result she found that she didn’t know the mind of her husband and others like she thought she did. In this book she reveals the findings her research so women can better understand and interact with the men in their lives.

There is also available: For Women Only Discussion Guide: A Companion to the Bestseller about the Inner Lives of Men. This book is written by Shaunti Feldhahn along with Lisa Rice, and is published by Multnomah. It’s designed to be used in small groups. It can even be used for having a one-on-one dialogue with the man of your life. Many women may wonder, “So what do I do with the information I’ve just been given?” This discussion guide is designed to answer that question. It contains personal stories, questions, and situational case studies to equip you in your own life.

182 responses to “Be Careful: Your Husband Will Seek Affirmation Somewhere”