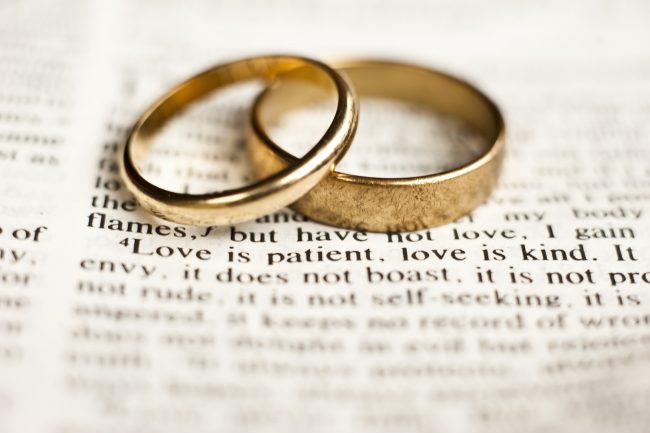 If we were to ask you if you are a Bible believing Christian the majority of you would say, “Yes, Absolutely!” And while that is an important question to answer, Cindy and I (Steve) believe there’s another question that’s just as important that we need to answer: Are you a BIBLE “LIVING” Christian?

If your answer is yes, then can it be said of you that you are a Bible-LIVING spouse? It’s relatively easy to say that we believe the Bible. But it’s entirely different to say we actually “live out” the Bible in our daily lives—particularly as it pertains to how we interact within our marriages.

I think A.W. Tozer sums it up well when he wrote:

Here’s a way to see where you stand in relation to this issue: If you consented to let your pastor place cameras in your home to record the things you said and did as a spouse to show the unedited tape to the congregation on Sunday morning, what would it reveal about you?

Agreeing there is NO spouse that would relate in a “godly manner” 100% of the time (at least Cindy and I don’t), overall what would your video look like? Would it show that you seek God and His word to resolve conflict? Would the congregation see you as a person who honors your spouse, using the principles of Love and Respect (Ephesians 5) as the guide for your relationship?

What about prayer? Is it more than just “lip service” to God? Is grace and forgiveness given when sins are committed against you? If you argue (and we all do), would your video show you doing it front of your children or in private? They wouldn’t see any screaming or physical violence, on your part, would they? …And the list goes on. But you get the picture.

Here’s the important question… Is it obvious that God/Jesus is the anchor/foundation for your life, or would it be hard to tell?

I’ll be honest, Cindy and I were guilty of some of those negative traits for many years in our marriage. But fortunately each of us came to the place of surrender and brokenness before God. We realized that to honor Him the best thing we could do is to have a marriage that reveals and reflects the heart of Christ.

From that point on it has been hard work, studying (and applying) what the Bible says about relationship issues. this is particularly true, as it applies to marriage.

Next, we’ve become students of one another to learn as much as we can. Admittedly, there have been times when we have crashed and burned along the way. But overall, there has been tremendous victory, and a DEEP love and respect that has grown between us.

In fact, Marriage Missions grew out of our failures and our successes. And we are passionate about helping other couples navigate the difficult parts of marriage so they can enjoy more of the wonderful parts that God created for us to enjoy—together.

There is an important point to all of this that we had better not overlook. We can attend every marriage seminar and Bible conference available. We can go on mission trips together, read our Bibles, and memorize scripture. But if we don’t PERSONALLY put into practice what we’ve learned we’re like the clanging cymbal in 1 Corinthians 13:1… empty. Jesus had stronger words. He would call us “whitewashed tombs” —just as He called the Pharisees. They looked good on the outside, but were rotten in places no one but God could see. That is not the way we want to be seen by God, our spouse, or anyone else!

We’re told in James 1:22: “Do not merely listen to the word, and so deceive yourselves. Do what it says.”

It’s also important for you to understand that you are not responsible for your spouse’s actions/responses. When you stand before God one day, the only focus will be on whether or not YOU were a Bible LIVING spouse. Excuses are not acceptable.

So, take some time with the Lord and ask Him to reveal the truth about YOUR stand before Him. If He shows you some areas you need to work on, commit to doing so. And then follow through and JUST DO it! It’s the right thing to do —it’s one that you committed to do “from this day forward” on your wedding day when you said, “I DO.”

6 responses to “Are You a Bible LIVING Spouse?”