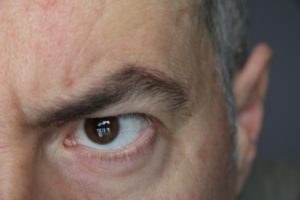 Do you have a temper? Are you frustrated? Do you lose your cool over little things? Do you have “road rage?” Is it common that you feel angry most of the time? Do you try to control your anger, but have times when it comes out and hurts others? Do you care about someone who is angry all the time and find yourself becoming angry or frustrated? Is it common that you say or do things that you later regret? If any of these are true, then this worksheet is for you.

Everyone gets angry, but not everyone handles his or her anger in a healthy way. To understand anger, we need to look at our feelings, thoughts and beliefs. Anger is multifaceted and our outer reaction (what people see) is based on deeply-held beliefs (inside) about who we are and how life should be. For example, the following four statements represent the main ideas angry people generally hold.

Are these true for you?

Notice the relationship between these four statements. Besides the negativity, they all suggest extreme rigidity. They also show a tendency to merge the action (being angry) with the person (the alleged source of our anger). These statements also involve personalization— assuming the behavior of the other is meant to upset you on purpose.

In failing to separate a person from his or her action, we imply that only a certain type of person (stupid, bad, mean, selfish, etc) could do something that angers us. It separates us from responsibility for our anger. It places anger “outside” of us, as something done to us, as opposed to a response that we have chosen. It’s as if our anger and rage is something someone else “deserves.” Remember anger is a feeling. We can choose what we will “do” with this feeling.

(Check the statements that apply to you)

__ I am often impatient.

__ I often have critical (negative) thoughts about others.

__ When I am upset with someone I may shut down any communication and withdraw.

__ I feel inwardly annoyed when family and friends do not seem to understand my needs.

__ Tension mounts within me when I tackle (or interrupted during) a demanding task.

__ I feel frustrated when I see someone else having fewer struggles than I do.

__ When facing an important event, I may obsessively ponder how I must manage it.

__ Sometimes I walk in another direction to avoid seeing someone I do not like.

__ When discussing a controversial subject, my tone of voice is likely to become loud, persuasive and/or forceful.

__ I can accept a person who admits his or her mistakes, but I have a hard time accepting someone who refuses to admit his or her own weaknesses.

__ When I talk about my irritations, I don’t really want to hear an opposite point of view.

__ I do not easily forget when someone does me wrong.

__ When someone confronts me from a misinformed position, I am thinking of my rebuttal as he or she speaks.

__ Sometimes my discouragement makes me want to quit.

__ I can be quite aggressive in my pursuits or even when playing a game just for fun.

__ When I am in an authority role, I may speak too sternly or insensitively.

__ At times I struggle with moods of depression or discouragement.

__ When someone speaks ill of me, I react with defensiveness.

__ I act kindly on the outside, while frustrated on the inside.

__ I often blame others for my problems.

__ Often, I struggle emotionally with things in life that aren’t fair.

__ At times I have an “I don’t care” attitude toward the needs of others.

__ I use sarcasm or cynicism in expressing humor.

__ I sometimes say things without thinking of the consequences.

__ It’s common that I dislike being told what to do.

__ I dislike waiting in lines.

__ I am often impatient with those I feel are not as smart as I am.

__  Insecurity or fear is something I struggle with.

__ I generally always want my own way.

__ I feel superior to most people.

__ There are certain things I feel I deserve.

__ Driving brings out my anger and frustration.

If you checked more than 5, you have an anger problem; read on.

The following are some important aspects of anger.

There are a few irrational beliefs that tend to predispose us to anger and other negative emotions. These beliefs are called irrational because it is almost impossible for us to make them happen.

How many of these are true for you?

•  I must do well and win approval of others for my performance or else I will rate as a rotten person.
•  Others must treat me considerately and kindly and in precisely the way I want them to treat me.
•  Everything in life is black or white; there is no gray.
•  The world (and the people in it) must arrange conditions under which I live so I get everything that I want when I want it.
•  I must be perfect in everything I do. I have to be the best.

•  It’s terrible if someone dislikes me or finds fault with me.
•  If I am angry it must be your fault; therefore any thing I say or do is your responsibility, not mine.
•  Life is against me (life isn’t fair).
•  Things should happen when and how I want them to.
•  I must control things and people in my life to avoid bad things from happening to me.

Some reasons we get angry. What are your reasons?

Letting go of anger is a process. There are no magic solutions. It’s important to recognize how our inner beliefs contribute to our anger. Below are some important steps to managing your anger.

•  Learn to recognize the many faces of anger in your life.
•  Admit that all angry expressions, good or bad, are the result of choice.
•  Take full responsibility for your anger and your behavior.
•  Let go of excessive dependencies so your anger management is inwardly directed rather than externally determined.
•  Choose to relinquish your cravings for control in exchange for freedom.
•  Ground yourself in truth by setting aside idealistic myths.
•  Keep your lifestyle habits consistent with your emotional composure.
•  Live in humility rather than self-preoccupied pride.

•  Hold your defenses to a minimum; trust your healthy assertions.
•  Accept the inevitability of loneliness as you struggle to be understood.
•  Relate to others as equals, neither elevating yourself above them nor accepting a position of inferiority.
•  Pass along to the next generation your insights on anger.
•  Avoid the temptation to rationalize your anger; assume full responsibility for who you are and what you do.
•  Be accountable for your ongoing growth and open about your anger management.
•  Work through your emotional wounds.
•  Focus on God’s love-for you and others.

Some individuals use anger to control their partner. They attack to control, manipulate and overpower. Domination is seen as a form of problem solving. A person who uses attack as a conflict resolution behavior is typically focused on someone or something outside of himself. The attacker considers himself as having little or no responsibility for, or power to improve the problem. The other person is at fault. The attacker’s anger and resulting behavior is a product of the other’s behavior, not theirs.

Forcing the other person to change, by any means, is the only solution the attacker sees as viable. The language of the attacker is full of “you” messages and lots of “always” and “never” statements. “You made my angry” “You always…” “You never…” Relationships of this type are explosive, abusive and extremely unhealthy. The underlying issues are typically fear—of abandonment or rejection and control—needing to control others or needing not to be controlled by anyone or anything.

Feeling angry is sometimes about feeling inadequate; doubting yourself, feeling insecure, uncertain or threatened. When angry, remember that you are a worthwhile person that is loved by God.

Which are true for you?

You CAN learn to feel your anger and change how you are reacting. The power is already yours. Don’t waste any more time and energy “doing” anger. Angry behavior can be controlled. The first step is to “own” your anger. Yes, anger is a feeling—but we can control how we express it. There is no good reason for harming anyone or threatening or manipulating them with anger. People do not “deserve” your anger or angry behavior.

Letting your anger control you will never help you achieve your goals. Angry behavior is always a choice. Allow yourself to see the other person as just that, a person. Give your self permission to feel your anger, yes even deeply; then decide how you will react.

This article is written by Jeff Parziale, from Instepministries.com. Jeff and his wife Judi have been married over twenty years; each bringing three children into the marriage. The challenges of working through the issues of remarriage and stepfamily life led them to start InStep Ministries.