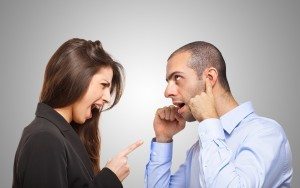 Have you ever had someone yell out, “Oh, grow up!”? Perhaps your parents said it to you when you were younger. Or maybe your spouse said it to you more recently, or you said it to your spouse. Whatever way it is, if it’s currently true of one or both of you —that’s definitely problematic if there isn’t a mindset determined to do just that… grow up.

Patsy Rae Dawson wrote an Embarrass the Alligator article titled, “The #1 Reason for Marriage Problems and Divorces? Refusing to Grow Up!” We’re thinking she’s onto something here. When we examine the reasons why most couples divorce there is usually at least one spouse who wants to cling to his or her “toys” reflecting singlehood behavior, not marriage. He/she wants things to go their own way, instead of working to “marry” their lives together for the benefit of both of them.

Frankly, marriage is grow-up time. Kids can get away with childish behavior —not wanting to work together. But it’s just not good when you make the sacred vow to someone and to God to “love, honor, and cherish” each other, but then you don’t do what it takes to keep that promise.

The Apostle Paul, in great Love Chapter found in 1 Corinthians 13 wrote, “When I was a child, I spoke like a child, I thought like a child, I reasoned like a child. But when I became a man, I gave up childish ways.” That’s a great truth for all of us to cling to —especially those of us who marry.

Patsy Dawson makes the important point we should all take seriously:

“Paul asserted that the #1 root cause of being unable to love others is refusing to grow up. …Christianity is about growing up from the heart —changing the way a person treats others. It’s about practicing love —not just preaching it from the pulpit.”

In Ephesians 4:15-16 we’re told, “speaking the truth in love, we are to grow up in every way into Him who is the head into Christ, from the whole body joined and held together by every joint with which it is equipped …so that it builds itself up in love.” We are called to maturity. If you want to act like a child, don’t take on responsibilities that require maturity. And if you have already, then commit to do what it takes to grow up.

Barbara Rainey made this point (in a Family Life Today article titled, 5 Ways to Help Your Husband Step Up to Manhood) when she wrote:

“Choose maturity. Sometimes in your marriage, one or both of you can act selfishly. Have you ever seen two children riding their bikes, and when the child in front stops, the child behind begins to ram his or her bike into the one in front instead of asking that child to move over? It’s called needling or just plain intimidation. Oftentimes the kid in front gets mad and the situation escalates. It’s called childishness.

“Sadly most of us enter marriage still clinging to some childishness in our behavior patterns. Your spouse may act like an adolescent at times, but the problem cannot be solved by manipulation, or criticism. One of you needs to choose maturity first to get out of the cycle.”

Honestly, we have to do that continually in our marriage, even now. It’s so easy to get caught up into selfism. But that’s not what we are to do as Christ followers, and it’s not what we vowed on our wedding day to do for the rest of our lives. Marriage demands grow up time! May we all take on this mission to do our part —that’s what we hope and pray.