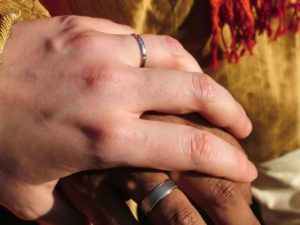 Intercultural marriages add an extra set of dynamics to relationships. The desire to marry comes with a need to merge two cultures into one. As a result, many questions arise. Will our families understand? What about spousal roles? What differences will be encountered with food and meal preparation?

Probably one of the biggest assumptions made within marriage is that we do things the correct way. After all, “My family has always done it this way. And it works quite well.” This same assumption is found within intercultural marriages. But it’s magnified.

Assumptions about how we live come with each culture. All of our life experiences through family and cultural background teach us how to deal with life’s challenges. Within an intercultural marriage, many different assumptions will surface over time. We will formulate our opinions and make judgments based upon our world views. Initially, these judgments will be external or on the surface. In time, the internal areas will be exposed also. Often, this is how we begin to formulate our own prejudice against other cultures.

For example, there are banks in the United States. And there are banks in New Zealand. Both banks serve a similar function. But in New Zealand you do not sign your checks to be cashed. Deposit slips are completed very differently as well. In the United States, one banking company will not cash another’s check unless you have an account with them. In New Zealand, the banks work together. Neither banking system is wrong. However, to the spouse encountering a new and unfamiliar system, it may be a challenge. There’s a tendency to think, “The way we did it in my country was better.” This will emerge quickly and frequently. Will we recognize it or try to hide it? This is the critical issue.

Another example of differences to think about is the medical arena. Medical services differ greatly from country to country. One country may have a national medicine provision. Other countries have very few doctors and distant or poor services. The United States has medical technology that many countries do not have. But it has a higher cost and a system that requires individuals to pay their own bills instead of the government. Will this present a problem for you? Consider the following important medical question. Where will your children be born? And why do you feel the way you do about this?

Other assumptions may be made in such areas as home decorating, and the way money is handled. Plus there are unfamiliar types of entertainment, and differing degrees of openness in personal sharing. There are different understandings of extended family relationships, and the celebration of holidays. Plus there are differing views of romanticism, the use of free time and vacations. Even the way children receive their educations are different. These areas are not meant to be all inclusive. But they give you an idea about the assumptions we have and would need to face in the event of an intercultural marriage.

Some of the negatives discovered by couples who are interculturally married can be varied. One wife confessed that her way of doing certain things drew a negative response from her spouse. For example, the way dishes are washed, the care of clothing or how the children are disciplined often varies from culture to culture. Marrying someone from an underdeveloped country and then bringing that person to the States may be shocking. The prosperity of North America can be incomprehensible. Likewise, the lack of what others may view as essentials can be equally shocking.

Feeling as though you are expected to be like the wives or husbands of the culture you married into can be a monumental hurdle to cross. Cultural and social norms may be so diametrically opposed to your country of origin. As a result you can become emotionally confused. And the inability to understand the perceived role is difficult. Plus, you may not agree with the traditions.

With each of the couples we interviewed, several cautions kept emerging. One of the strongest was knowing each other’s culture. If at all possible, spend some time living in that culture before marriage. The minimum amount of time suggested was 2 or 3 months. While visiting your fiancé’s country of origin, try to live with a local family as well as your fiancé’s family. This would enable you to experience firsthand the relationship differences within the family.

Here’s a word of caution. Don’t think that all families of this culture operate this way. It would be like saying all North American families function in a similar way.

The second area of concern was being sure that you are called together. “There is a tendency not to listen to people and their concerns about your marrying someone of a different culture,” one spouse said. “It’s easy to begin thinking, ‘It’s us against them.’ So you close yourselves to some very valuable input, and hesitation provoked by these loved ones.”

In time, the goal can become a desire to beat the odds. You try to prove the hesitant ones wrong and press on ignorantly in order to make your point. Decide to be very accountable to your pastor, your parents and to those relationships you value. Listen to them. Do not shut them out and react by drawing closer to your fiancé. Weigh their concerns and think through their questions.

Caution 3: Know What Both Cultures Value.

In North American culture, there is a tendency to value things. In many other countries the tendency is to value extended family, the elderly, and hospitality. It’s a “what’s mine is yours” type of mentality. People become the primary concern. Consequently, what people think of you is important. One husband mentioned that his culture is more formal. And it’s conservative, especially in dress. “My wife,” he explained, “is much more casual. In my country I wear long-sleeved dress shirts. They must be clean and pressed. If not people will judge my spouse as a lazy wife.”

The final strong note of caution resulting from our survey concerned being aware of the difference between behavioral modification or adaptation and core value changes. It is possible, for example, for a Middle Eastern man to adapt behaviorally to U.S. culture and look like he is, indeed, fitting into it. His core values may not have changed. He is simply conforming on the outside to the expectations of others. Because there is no inward change, this same man in his country of origin would look like, sound like and think like a Middle Easterner.

Why? In his thinking he has not lied or deceived. He has just adapted. He can now be who he really is and perform according to what he has been taught by his family and culture. His unsuspecting wife finds herself living with a man whom she feels has made a radical about-face. She may feel trapped in a country and a culture with an unfamiliar person whom she thought she knew.

Accepting and appreciating as many of the differences as you can will serve to enhance the marriage relationship. This experience is not to be viewed as all negative. The differences are something to embrace and value in one another. No two persons think alike or value the same things. Give one another the freedom to be who you are. Allow the Holy Spirit to mold the two cultures together. Rejoicing in the richness of your inheritances and learning from both can be a joyous experience.

This article can be found in the book, Called Together

, written by Steve and Mary Prokopchak. It is published by Destiny Image Publications. Difficult questions are addressed that couples must answer before and after they say, “I do.” If you’re facing this situation we recommend purchasing this book. It supplies other down-to-earth advice and biblical wisdom. Plus there are post marital checkups on communication, emotional needs, budgeting, and more.

15 responses to “INTERCULTURAL MARRIAGES: Is My Way the Right Way?”