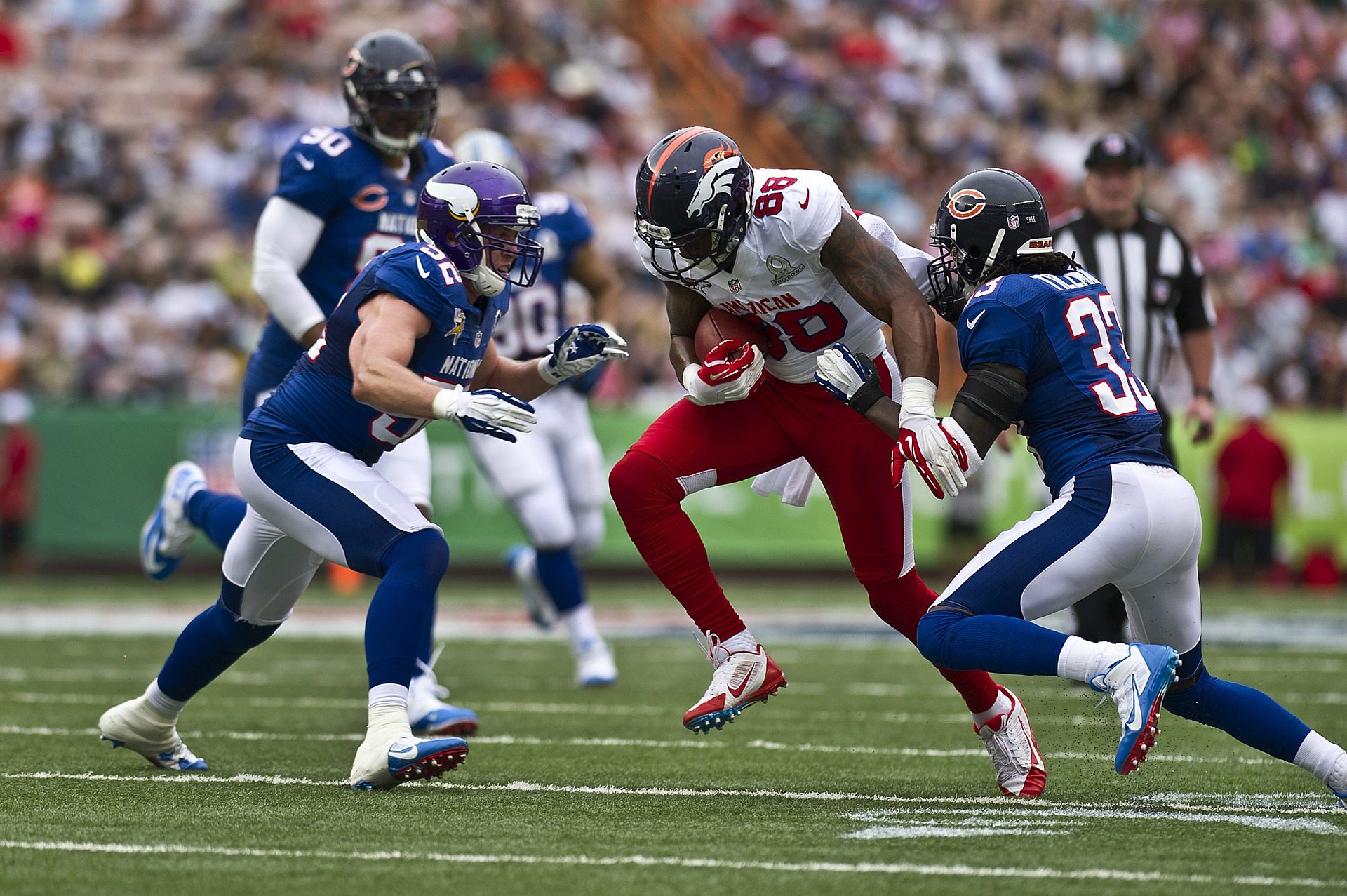 This is football season in the United States. No, we’re not talking about soccer. It’s true that in some countries soccer is also called football. But American football is different from soccer. Yes, there are some similarities; but American football involves more physical combativeness between teams.

There is a lot of tackling, shoving, bumping into your opponents and running an oval ball back and forth to its intended goal line at opposite sides of the football field. The team that successfully runs this ball to their goal line more often than their opponents run it to theirs, WINS!

It’s a real rough and tumble game between teams; but it can also be a lot of fun (for some people). A lot of team rivalry is involved between opponents; but there is also a lot of camaraderie involved within each team.

But how is marriage similar to American football? Actually, there are a lot of similarities.

First off, we want to clarify something. We’re not proposing that marriage is a game. It is not! God takes marriage seriously, and so should we!

And marriage is not, and shouldn’t be a combative contact “sport” (as it is in football). However, being in close, intimate contact with each other is an important part of being married. So, there is a loose-fitting similarity here.

But it’s the major commitment, determination, and the intentionality it takes that holds more similarities. And yes, even the work you need to put forth, applies to playing a good game of football, and in building a good marriage.

Here’s another similarity—you are expected to be a part of a “team” both in football, and in marriage. There are 11 players involved in a football team. But there are two involved in a marriage—a husband and wife. Everyone else involved is to take a sideline position. (Hopefully they are holding supportive positions.)

Those with a singular “I’m in this for myself” mindset should not enter into either one of these commitments. That’s not how football works well, nor does it work well in marriage.

But there are many other similarities, as well.

Below are some additional similarities that come to my mind. As you read them, allow the Holy Spirit to talk to you as to how this applies to marriage.

• In football and in marriage commitment is vital!

Don’t play if you’re not committed to put your all into playing football. It is similar in marriage. Don’t get married if you’re not fully committed to giving it all you have. Marriage (unlike football) is not a game. It’s for grown-ups who are willing to do what it takes to make their marriage work. And in marriage, as it is in football, you are part of a team. This is not about doing your own thing solo.

It’s like the old saying, “It’s one for all and all for one.” That applies to football AND marriage. Both involve partnership and working together.

In football, the whole team goes down if you lose the game. In a similar way, within marriage, if one spouse loses, you both lose. How does it benefit your marriage if one of you “wins” at the expense of your marriage partner losing? Even in marriage, if one loses, you both lose. The goal needs to be to strive to find “win/win” solutions for both of you.

• You need to believe you CAN win as a team.

A defeatist attitude will lead to defeat, almost certainly. Trust in your coach (in marriage, it would be God who is to be your “coach”). Look to your other teammate(s) to help you, and don’t give up.

Also, With Marriage as With Football:

• Take the good skills you have, and keep working to improve yourself.

Do what you can to be an even better teammate. Apply yourself to learning what is needed. It’s those that stop doing this, or won’t apply themselves for whatever reason, that are in trouble.

• This is not about tackling each other.

It’s important to always keep in mind that you’re on the same team. Don’t combat with each other. Fight the outsiders who want to take you down. But purpose to work together. Realize that you may not always think alike, but you can think together. And you can build togetherness.

• It’s important to keep the passion.

That’s true in football, as well as in marriage. In football, we often hear of teams losing because they “lost their passion.” They didn’t give it their all—they lost the spirit. The team started the game out with a lot of enthusiasm; but somewhere along the line, they allowed themselves to lose their vision of keeping the dream alive.

Along the same line, (blogger) David W. Jones talks about the passion involved in football and in marriage:

In Both Marriage and Football:

If you lose the passion somewhere along the way in your marriage, then refocus on your goal. Intentionally look towards each other, rather than away from each other. Look for ways to recapture the passion. You can, but it will take intentionality, and looking to God to help you. His very name means Love, so who is better to teach you how to love each other again?

• Pay attention to, and follow the leading of your coach.

They are cheering you on and helping you to “win” as a team. In marriage, the Godhead is your coach. God the Father, Jesus your Savior, and the Holy Spirit, your “Wonderful Counselor” —all three are available to help and guide you.

• Knowing and following the Playbook is vital!

In football, it’s the playbook, that has your “plays” laid out for you. It contains the important things you need to know. If you don’t know and apply what’s in the playbook, you’ll most likely lose.

In marriage, it’s your Bible that will help you to know how to best live together as a great team. The principles for loving each other are the principles for living, which are there for your guidance throughout the Bible. It’s vital to know what’s in it and APPLY what you learn!

• You each have different talents, that combined together, can help you to be a great team.

It’s important that you discover what they are, you combine them together, and use them intentionally, as you should.

• It’s not uncommon to get tackled.

As a matter of fact, tackling and falling down should be expected! In football, that’s what the other team tries to do. They work to trip you up and make you fall so you can’t get to the goal.

In marriage, life often throws the tackles (lead by the enemy of our faith, plus, living in a fallen world). We’re told there will be “troubles” (1 Corinthians 7:28) in marriage, as well as “trials and tribulations” that we will experience in life (John 16:13). It’s what we do with those troubles, when we’re tackled by life, that will make all the difference in the world. We are to get up, sometimes helping each other up. And we are to work together as a team to defeat the enemy, not allowing ourselves to fall to defeat.

You need to be able to read each other’s signals when it’s important. That will take intentionality to learn more about each other. You also need to learn the skills it takes to work together as a successful team. In football they often call a “huddle” to “gather in a close-packed group” to determine different strategies for playing/winning the game.

Sometimes in marriage it can be beneficial to huddle together as a husband and wife. But the difference is that you take more time and care to share and come to agreement as to what is best for your marriage partnership.

Plus, in Marriage and Football

• Sometimes someone gets hurt.

That’s what happens in life. And sometimes, you can even get accidentally hurt by your “teammate.” Hopefully, it’s accidental! If it isn’t by accident, you definitely need to work all the more on that one. A good “huddle” may be required. You need to figure out how to get back together as healthy teammates, rather than opponents. Tougher measures are needed if abuse is involved.

• It’s important to pay more attention to what you’re doing right or wrong.

Don’t keep focusing so much on what your teammate is doing. In football, it’s important for the players to depend upon their coach to straighten out the “wrongs” their teammate is committing. It’s not about who contributes more, etc. Team spirit is important, everyone working together, combining their talents for success.

This principle is important in marriage too. Keeping score on each other, can often lead to problems. You aren’t your spouse’s Holy Spirit. HELP when it’s good to do so; but don’t take over God’s job. Focus on what you should do for the betterment of the marriage, and allow God the elbowroom to work on your spouse. You are God’s colleague in helping and loving your spouse. You are not the one who is to take over, and do what He wants to do.

And don’t pull a “Sarah.” She was the wife of Abraham, who essentially seemed to think that God wasn’t doing what He promised fast enough, so she came up with her own solution (see: Genesis 16). As a result, this world has been paying the price ever since. Don’t let your marriage go in the same direction because you get impatient or you think you know how to do things better than God does.

• Keep in mind that you have observers watching you.

In football, the team best not forget that they have a stadium of people watching them. The fans are expecting them to win. The roar of the crowd sure can be inspiring. It’s also important to please them, if the players want to stay on the team.

In marriage it’s a bit the same and yet also different. Yes, there are observers. We have a “great cloud of witnesses” watching us at all times. Some are human, and some are not. It’s important though, to always watch how we walk —how we live our lives. This is so that others, when they see us, may find themselves drawn to want to know our God better, as a result.

It’s God’s good pleasure, though, that we should most desire. We are told in the Bible that we are created by Him and for Him.

• Always keep in mind the goal.

It’s IMPORTANT! In football, it’s what they play for —to get there to score, and score well, at that.

In marriage, our goal is finishing well. It’s important not only that your spouse is pleased, and those who observe how you live “a life of love” (Ephesians 5:1) together, but also that God is well pleased. There could be no sweeter feeling that victory could bring than to hear the words spoken by our Lord, “well done, good and faithful servant.“