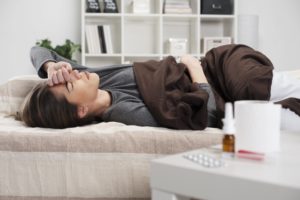 This subject hits home because I’m just now recovering from the flu. I still feel a bit shaky, but I can tell that I’m on the mend. Thank you, Lord!

I have a confession to make here, though. For many years, when Steve would get sick, I would get very weird. Actually, I would get downright selfish about the whole matter. His illness —whether it was the flu, a bad cold or whatever, became a huge inconvenience! It threw everything going on in our home off-kilter. All I would want is for him to get better. (Of course!)

But I confess that my motives were not entirely unselfish. I also wanted him to recover quickly so things could go back to “normal” (whatever that is).

Yes, I did feel bad for him. And yes, I did serve him in different ways in making soup and meeting his needs in getting him this and that. But my attitude sure did stink sometimes. I would feel very sorry for myself and grumble. And even though I would make soup for Steve, it wasn’t always served without some type of resentment thrown into it. (I guess that’s better than spit but maybe not.)

The Lord finally grabbed my attention and has been helping me to fix that through the years. He helped me to see that my attitude was anything but mature. It was actually quite childish. Marriage is for grown-ups, not children playing house. With children if something doesn’t go their way, they throw little pouting tirades. It isn’t supposed to go that way with mature adults.

The illness is bad enough for a person to suffer through. But it’s even worse when you add onto it, marital tension from the other spouse, as well.

Fortunately, Steve has been a wonderful help while I’ve been sick. (He wasn’t always that way in the past when I was sick. We’ve both had some growing up to do on this area of our lives.) I’m thankful now, though, for his reaching out to grow in maturity. What a blessing!

In marriage, things don’t always go so smoothly. There are a lot of bumps in the road and illness is one of them. As Dr Ray Pritchard said in his sermon, “Grow Up”:

“Every couple has problems. Those problems either drive you apart or they pull you together. Maturity is the ability to grow closer together as a result of the trials of life. It is what keeps a couple still in love after traveling across an ocean of heartache.”

The Opportunity to Grow Up

It also can help us to “grow up in maturity —not lacking anything,” as we’re told in James 1 of the Bible. We forget that sometimes.

I hope that you get what I’m saying here. If your spouse is sick, do what you can to help—even if it adds onto your workload. It may even involve a lifetime of “helping.” Yes, this is tough stuff. But tough stuff happens.

My husband Steve and I have been through and are going through some of the lifetime illness trials, too. You can read about our struggle if you put the word, “Diabetes” into the search feature of this web site. Perhaps you can learn from what we each write about it.

If you’re married and didn’t realize that you would have to face such grown up issues, my heart goes out to you. There is no doubt that illnesses many opportunities to reach for maturity. We’d all love to have things go easier in our marriages. We’d all love to not be forced to do the tough stuff. But that’s not how it is.

Thankful In Sickness and in Health

With that said, I’m going to go lay down. I’m still not feeling so good. But I’m thankful that God is showing me and is showing my husband, how to better serve each other, “in sickness and health.” It’s something we promised in our wedding vows but forget sometimes.

I sure hope you don’t get this flu bug. It’s horrible. And if you do or your spouse does, please, “Serve one another in love.” (Galatians 5:13)

P.S. On a related issue, there’s an article titled, Does Satan Cause Migraines? written by Dr Roger Barrier, that we recommend you read.