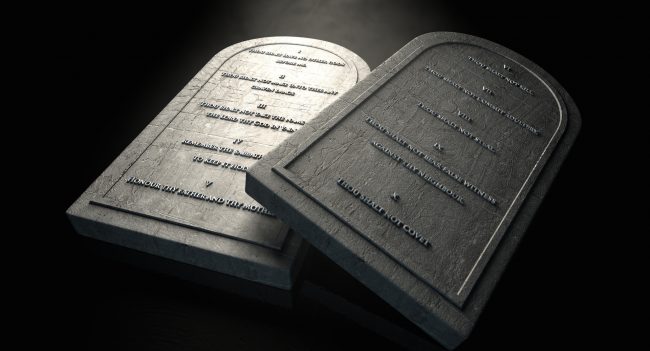 Everyone lives by a set of rules rarely spoken, but always known. [They are kind of like unwritten, unspoken marriage commandments and expectations you didn’t know were in place.] These unspoken rules become more vocal when our spouse “breaks” them. This became painfully obvious to us when we visited our families for the first time as a married couple.

One Christmas, we flew from Los Angeles to Chicago to be with our families for the holidays. The first night was at my (Leslie’s) house. As was my family’s custom, I woke up early in the morning to squeeze in every possible minute with my family. Les, on the other hand, slept in. I interpreted Les’s sleeping as avoidance and rejection and felt he did not value time with my family. “It’s embarrassing to me,” I told Les. “Everyone is up and eating in the kitchen. Don’t you want to be with us?”

Les, on the other hand, didn’t understand my intensity. “What did I do? I’m just catching up from jet lag. I’ll come down after my shower,” he said. As I found out later, Les expected a slower, easier pace during the holidays, because that’s the way it was at his house.

In this incident, Les had broken a rule he didn’t know existed, and I discovered a rule I had never put into words. Both of us felt misunderstood and frustrated. We both had our own ideas about what was acceptable, and it never occurred to either of us that our expectations would be so different. Each of us became irritated by the other’s unspoken expectations and frustrated because the other did not live by the same rules.

Since that first Christmas we have learned to discuss our secret expectations and make our silent rules known. We have also helped the couples we counsel to become more aware of their own unspoken rules. This will keep little problems from becoming big ones. Below is a sampling of the rules we have heard from other couples.

Are you walking through a marital minefield of unspoken rules? Your Personal Ten Commandments can help you heighten your awareness of your unspoken rules and thus avoid needless explosions. It will help you recognize that you are free to accept, reject, challenge, and change the rules for the sake of your relationship.

This exercise is designed to help you uncover some of your “unspoken rules.” It will take about 15 to 20 minutes. Try to articulate some of the “unspoken rules” you grew up with. Take your time to think it over.

These rules are generally so ingrained we are rarely aware of them. Once you have articulated your “personal 10 commandments,” share them with each other. Are there rules you would like to change? Take a moment to discuss how unspoken rules might affect your marriage.

Anytime you have a fight or disagreement, ask yourself: “Is this fight a result of one of us breaking an unspoken rule?” If this is so, you should add that rule to your list. Then discuss with your spouse how you will handle that situation in the future.

This article is excerpted from the book, Saving Your Marriage Before It Starts

by Drs. Les and Leslie Parrott, published by Zondervan Publishing. By reading this book you will learn the skills you’ll need for a lasting, happy life together before unhappiness sets in. They have also written two companion workbooks. There is one for the man and one for the woman. “The twenty-one self-tests in the workbooks will help you and your partner put into action what is taught in this book.

To give you an example of 10 Marriage Commandments you can come up with, we’re sharing ours below. We actually have named them Ten Marital Commitments. That’s just what we decided upon together. Afterward, we are posting “I WILL” statements that some friends of ours shared with us. Read what we have put and they have together and see what you can come up with. It doesn’t matter what you name it… just that it is something you both agree upon and WILL FOLLOW. These are commitments you have made to each other:

Because our marriage is based on our dependence on God, and the Truths of His Word, we commit to each other and to the Lord that:

1. The word, “divorce” will never be part of our vocabulary, using it as a threat or consider it to be an option in our marriage.

2. We will always speak and act in respectful, non-attacking ways.

3. We will protect our marriage by “building hedges” to guard our integrity and strengthen our commitment to one another.

4. Any purchases over $100 (except for groceries) are to be mutually agreed upon (unless it is from personal funds).

5. When one of us has a “problem,” we BOTH have a problem. We will work to resolve it together. It’s “All for One and One for All.”

6. During times of crisis and hardship we will draw towards God and each other rather than away. Yet we will give each other grace and space when necessary with the goal in mind to survive these times together as best as possible as marriage partners.

7. We will protect each other’s dignity, not using degrading remarks or humor. We commit to build each other up both when we’re alone together and also in front of others—not tearing each other down.

8. We will pro-actively do something at least once a year (hopefully more) to grow our marriage. The goal in mind is to reveal and reflect the heart of Christ within our marriage, to the glory of God.

9. We will support each other in our individual ministries and friendships as long as they don’t hurt our marital partnership.

10. It is our mission to work together in family matters, and in ministry opportunities—especially in helping to strengthen marriages.

And then, instead of naming them 10 Marriage Commandments or Commitments here are:

♥ I will cherish my marriage. God is first, marriage is second, and children are last.

♥  I will take personal responsibility for my life in the word, and in being open to accountability from others.

♥  Additionally, I will commit to keeping my mind pure.

♥  I will commit to being fiscally responsible and in planning for our future financially.

♥  I commit myself to thinking in the long, rather than the short term.

♥  In my marriage and personal life, I commit to hold no record of wrongs.

♥  I commit to personal hygiene.

♥  I commit to not lose hope. This is especially important during dark times, which I commit to do.

♥  I commit to help around the house to the best of my abilities.

♥  Wholeheartedly, I commit to wanting to be married to you.

♥  I commit to being sensitive to your sexual needs.

♥  I commit to being sensitive to your emotional needs whether I understand them or not.

♥  Also, I commit to not being selfish, even when I want to be.