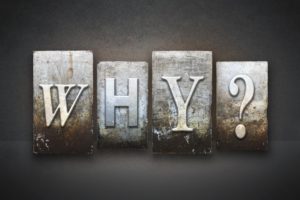 Women appear to tend to be more concerned about the relationship aspect of marriage than men. They buy most of the books on marriage to try to improve them and initiate most marriage counseling. They often complain about their marriages to their closest friends; sometimes to anyone who will listen. And they also file for divorce twice as often as men.

Why do women seem so dissatisfied with marriage? What do they want from their husbands? What bothers them so much about marriage that most are willing to risk their families’ future to escape it? Why do women leave men?

Each day I’m confronted by women who are extremely frustrated with their marriages. They usually express no hope that their husbands will ever understand what it is that frustrates them, let alone change enough to solve the problem. From their perspective, marital problems are created by their husbands who do little or nothing to solve them. Wives tend to see themselves as the major force for resolving conflicts, and when they give up their effort, the marriage is usually over.

Expectations Out of Reach

When I talk to their husbands, they usually have a very different explanation as to why their wives feel the way they do. They often feel that the expectations of women in general and their wives in particular, have grown completely out of reach. These men, who feel that they’ve made a gigantic effort to be caring and sensitive to their wives, get no credit whatsoever for their sizable contribution to the family. They feel under enormous pressure to improve their financial support, improve the way they raise their children, and improve the way they treat their wives. Many men I see are emotionally exhausted and feel that for all their effort, they get nothing but criticism.

The simpler role of husbands in decades past has now been replaced by a much more complex and confusing role, especially in their relationship with their wives. Some conclude that women are born to complain and men must ignore it to survive. Others feel that women have come to expect so much of men that they’re impossible to please, so there’s no point in even trying. Very few men, these days, feel that they’ve learned to become the husbands that their wives have wanted, and the job seems to be getting more and more difficult.

Men’s perceived failure to satisfy their wives is punctuated by the fact that women file for divorce twice as often as men. In other words, their unhappiness with marriage often results in divorce. The most common reason women give for leaving their husbands is “mental cruelty.” When legal grounds for divorce are stated, about half report they’ve been emotionally abused. But the mental cruelty they describe is rarely the result of their husband’s efforts to drive them crazy. It’s usually husbands being indifferent, failing to communicate and demonstrating other forms of neglect.

Another reason for divorce reported almost as much as mental cruelty is “neglect” itself. These include both emotional abandonment and physical abandonment. Husbands that work away from the home, sometimes leaving their wives alone for weeks at a time, fall into this category.

When all forms of spousal neglect are grouped together, we find that it’s far ahead of all the other reasons combined that women leave men. Surprisingly few women divorce because of physical abuse, infidelity, alcoholism, criminal behavior, fraud, or other serious grounds. In fact, I find myself bewildered by women in serious physical danger refusing to leave men that threaten their safety. Simply stated, women leave men when they’re neglected. Neglect accounts for almost all of the reasons women leave and divorce men.

I have little trouble convincing most men that verbal and physical abuse are legitimate reasons for their wives to leave. And there has been increasing social pressure on men lately to avoid hurting their wives physically and verbally, which makes my job even easier. But neglect is a much tougher sell, and it’s also much more difficult to overcome than abuse. While it’s the most important reason women leave men, it’s hard to convince men that it’s a legitimate reason, something they should avoid at all costs.

Some of the common complaints I hear from women is, “He ignores me except when he wants sex. My husband sits and watches television when he could be talking to me. He rarely calls me to see how I’m doing. He hurts my feelings and then never apologizes. Instead, he tells me I’m too sensitive.”

Most husbands are mystified by these complaints. They feel that their wives demand too much, and that most other women would be ecstatic if married to them. Their wives have become spoiled, take their efforts for granted and have unrealistic expectations.

What’s more, their wives aren’t expecting more effort from them. Instead, they expect efforts in a different direction. It isn’t more difficult to please women these days; it simply requires a change in the priority of effort.

What are women looking for in men? They want a soul mate, someone they trust who’s there for them when they have a problem, who takes their feelings into account when decisions are being made. Someone to whom they feel emotionally connected.

I use a house as an illustration to help husbands understand how their wives feel. Each room in the house represents one of the husband’s roles in life. There’s a room for his job as a production manager, there’s another for golf, another for his new sports car, one for his garden, one for his children, one for church, and, yes, one for his wife.

As he makes his way through an average day, he visits various rooms when he’s faced with the role the room defines. And when he’s in a certain room, the others are blocked out of his mind so that he can focus his undivided attention on the role he plays at the time. He does his best when he’s not faced with distractions, and prefers to deal with each problem with all his energy and creativity so that he does the best he can in each role he plays.

The wives of most men are only one of many rooms in this imaginary house. It represents the “husband” role. When they’re in that room, they usually try to give their wives undivided attention and make a special effort to meet their needs. They also go to that room to have their own needs met, particularly the need for sex.

What frustrates wives most is that they’re relegated to only one room in their husbands’ imaginary house instead of every room. In other words, they want to be integrated into a man’s entire life, not relegated to one corner. Without such integration, there can be no emotional bonding, uniting of the spirit, feeling of intimacy, and in many cases, no sex.

When I counsel a husband, I explain that he’s to invite his wife into each room of his house. Regardless of his role or responsibility, his wife should be considered in each decision he makes. Once the invitation is made, the results are startling!

When a husband invites his wife into each room of his house, she helps change his priorities. She reminds him that her feelings are very different from his. As a result, he begins to live his life in a way that’s compatible to her needs and values. He learns how to avoid habits that cause his wife to be unhappy, and he learns how to meet her most important emotional needs. He also learns how to give his undivided attention to her and schedule time to be alone with her.

To help men integrate their wives into each room, I’ve encouraged husbands to follow the Policy of Joint Agreement. NEVER DO ANYTHING WITHOUT AN ENTHUSIASTIC AGREEMENT BETWEEN YOU and YOUR SPOUSE.

This policy helps men take their wives’ feelings into account whenever they make a decision. They avoid thoughtless habits, learn to meet emotional needs with mutual enjoyment and resolve their conflicts. All of this creates marital compatibility and emotional bonding.

Most men complain that if they invite their wives into every room of their imaginary houses, their wives will take over completely and they’ll lose all their peace and freedom. They imagine their identities shriveling away and find themselves a shadow of their former selves. But the Policy of Joint Agreement prevents that unfortunate outcome. Joint agreement means that both husband and wife must be enthusiastic together, and no one risks losing their identity or subjecting themselves to slavery when they themselves must be enthusiastic about each decision. The goal is to become united in purpose and spirit, not to overpower or control each other.

How easy is it?

Couples that are already emotionally bonded have little or no trouble following this policy. They’ve already learned how to behave in sensitive and caring ways in each of their life’s roles. But emotionally distant couples have great difficulty with the policy at first. They’re accustomed to doing what they please regardless of its effect on each other, especially when they play certain roles. But if they follow the policy for even one day, they begin to see how their thoughtlessness has created emotional distance.

As couples apply the policy to each of their daily plans and activities, they begin to feel cared for by each other and are encouraged by each other’s thoughtfulness. Over time, their emotional binding becomes more and more firm, and the policy becomes easier and easier to follow as they become soul mates.

Men who follow the Policy of Joint Agreement think about their wives throughout the day. When they make decisions they ask themselves how their wives would feel. Phone calls are made whenever there’s doubt. As time passes, these men become increasingly sensitive to their wives’ feelings. If men consider their wives feelings in each decision they make, asking their wives when there’s any uncertainty, they create a compatible lifestyle.

The Policy of Joint Agreement helps create understanding, emotional bonding, intimacy and romantic love in marriage. Men that learn to take their wives feelings into account meet their most important emotional needs. They also learn to overcome the selfish habits that make their wives so unhappy, because these habits don’t meet the standard of mutual agreement. Over time, they experience what every couple hopes to create in marriage: A loving and compatible relationship.

A woman doesn’t leave the man who has invited her into every room of his house. That’s because she doesn’t stand outside the rooms of his house feeling like a stranger. She’s welcomed into his entire home as his cherished life partner.

This article was featured in the New Man Magazine (which is no longer being published). This magazine provided wisdom and encouragement to men from the approach of real masculinity and Christianity. Even though this was an American Magazine, it also provided international subscription services.

Dr Willard Harley, who is a well known author and speaker. He has a great web site that you may want to check out at marriagebuilders.com. It has a lot of very helpful articles plus a Discussion Forum that is also available for your use.

If you have tips you can share to help others, please “Join the Discussion” by adding your comments below.