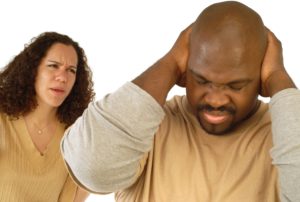 When we’re angry we’re often tempted to deal with our anger in two improper ways: stuff it or spew it; or, put another way: hide it or hurl it. There are angry stuffers and spewers. These are two extremes, two ruts on either side of the road. (Dr David Ferguson)

It’s common to become angry and disagree with each other in marriage. And even though we don’t WANT disagreements to happen, they can actually be beneficial to our relationship, if handled properly.

When we clear the air of misunderstandings and/or misconduct, we can use these times to help us build communication bridges between us.

The Bible says, “In your anger do not sin. Do not let the sun go down while you are still angry, and do not give the devil a foothold.” (Ephesians 4:26-27) ”Rid yourselves of all malice and all deceit, hypocrisy, envy, and slander of every kind.” (1 Peter 2:1) “Let us therefore make every effort to do what leads to peace and to mutual edification.” (Romans 14:19)

It’s not anger itself that’s the problem; it’s the way we DEAL with it because of the breakdown in communication it can cause. Anger is a bi-product of an underlying hurt we’re feeling deep inside. These feelings make us more vulnerable to handling it improperly.

That’s where being a “Stuffer” or a “Spewer” comes into view. It’s important to recognize if you’re a spouse who handles anger in this way and/or if you’re married to one.  According to David Ferguson and Don McMinn, from their book, “Emotional Fitness” (no longer being published):

(or hiders) have difficulty admitting that they’re angry and have an even harder time expressing their anger. They tend to minimize their hurts and are reluctant to share. Why do stuffers stuff? There are many possible reasons:

• They think anger is sin.
• They are uncomfortable with confrontation.
• Stuffers grew up around family members who stuffed their anger, so they’ve learned the same behavior.
• They grew up around family members who spewed their anger and having been the recipient of that pain, they are doing just the opposite.
• Feelings of low self-worth make them feel as if they’re not worthy of being heard.
• Fear inhibits their willingness to express anger.

(or hurlers) are just the opposite. When they’re upset, they let you know it, and it’s usually not pretty. Why do spewers spew? There are many possible reasons:

• They don’t know how to express their anger properly.
• They grew up around family members who spewed their anger, so they’ve learned the same behavior.
• Personal insecurities cause them to want to intimidate others.

Married to a Stuffer or Spewer?

So… is it possible that you’re a Stuffer or a Spewer or are married to one? Prayerfully look within and ask God to help you to recognize if you’re dealing with underlying hurt that is causing problems within your marriage. Refrain from pointing fingers in a hostile way at your spouse, but instead pray:

“Search me O God and know my heart. Test me and know my anxious thoughts. See if there is any offensive way in me and lead me in the way everlasting.” (Psalm 139:23-24)

If you ARE a Spewer or Stuffer, or your spouse is one, ask God to help you to do your part in handling conflict in the healthiest way possible. Keep in mind that we’re told in the Bible:

“If anyone considers himself religious and yet does not keep a tight rein on his tongue, he deceives himself and his religion is worthless.” (James 1:26) “The tongue of the wise commends knowledge, but the mouth of the fool gushes folly.” (Proverbs 15:2)

If you’re a Spewer you need to motivate YOURSELF to get rid of this behavior because of the “in your face” hostile damage it can cause to your relationship.

A Stuffer needs to deal with their behavior for a different reason. They often deny that they even have a problem. They’ll justify their actions by thinking, “At least I don’t spew out my anger that way!” But what they don’t realize is that by stuffing their anger, it can turn into pride and bitterness (and God’s Word is specific in stating that we’re to stay away from being prideful and bitter). Those who stuff their anger can also highly frustrate others around them and this does not lead to “peace and to mutual edification” as the Bible talks about.

As a marital team, you can’t deal with that which isn’t acknowledged. The problem can become like having an elephant in the room that no one will admit is there and yet it keeps doing its damage none-the-less! Even if the Stuffers intentions are noble in trying to prevent additional hurt, the results (unless Spirit-led) can cause pain in a different way.

So, how can you do things differently?

“The best way to express anger is to share your hurt, not your anger. This requires discovering the hurt under the anger. For instance, if your spouse shows up two hours later than when they said they’d be home and they didn’t call ahead to tell you they’ll be late, instead of spewing out angry venom, or on the other end of the spectrum, refusing to talk to them about it, find the right time to share your hurt with them.

“Tell them, ‘When you were so late and I didn’t know where you were I was frightened because you said you’d be home and you didn’t even call to say you’d be late. And then when you came home and seemed so uncaring that I was worried I felt confused. I didn’t know whether I wanted to hug you or lash out at you because I felt betrayed and was so angry!”

Ferguson and McMinn go on to say:

“Even when we properly express anger, it usually takes a measure of self-control to keep from overreacting. That’s why the Proverb says, ‘A fool gives full vent to his anger, but a wise man keeps himself under control.’ (Proverbs 29:11)

1. Take it out on someone who didn’t have anything to do with hurting you.

2. Become passive-aggressive. (I’m going to get back at you in very subtle ways: I’ll be late when you want to be on time; I’ll neglect meeting your needs; I’ll do what I know irritates you.)

3. Verbally abuse people by saying hurtful things (for instance, attacking someone’s character because he or she may have made a mistake).

4. Become violent —engage in physical violence (striking someone, throwing objects). It’s important to teach children how to express their anger verbally in a proper way. If not, they may stuff their anger, which is unhealthy, or they may vent their anger by coloring on the wall, hitting the dog, or other ‘acting out’ situations. We’re often all too quick to try to correct their behavior, ‘Don’t do that’ without first teaching them how to verbalize their anger verbally.”

“Instead we are to ‘speak the truth in love.‘ (Ephesians 4:15) We are to speak our anger in ways that are truthful, respectful, and edifying, and make sure our motivation is because of “love.”

If you need more help with anger issues, please visit the Communication and Conflict and/or the Abuse in Marriage Topics of this web site to read what we make available. We hope you will find them helpful.

Our love and prayers are with you as together we make our marriages the best they can be —revealing and reflecting the heart of Christ into ALL we do!

One response to “Angry Stuffers and Spewers – MM #286”