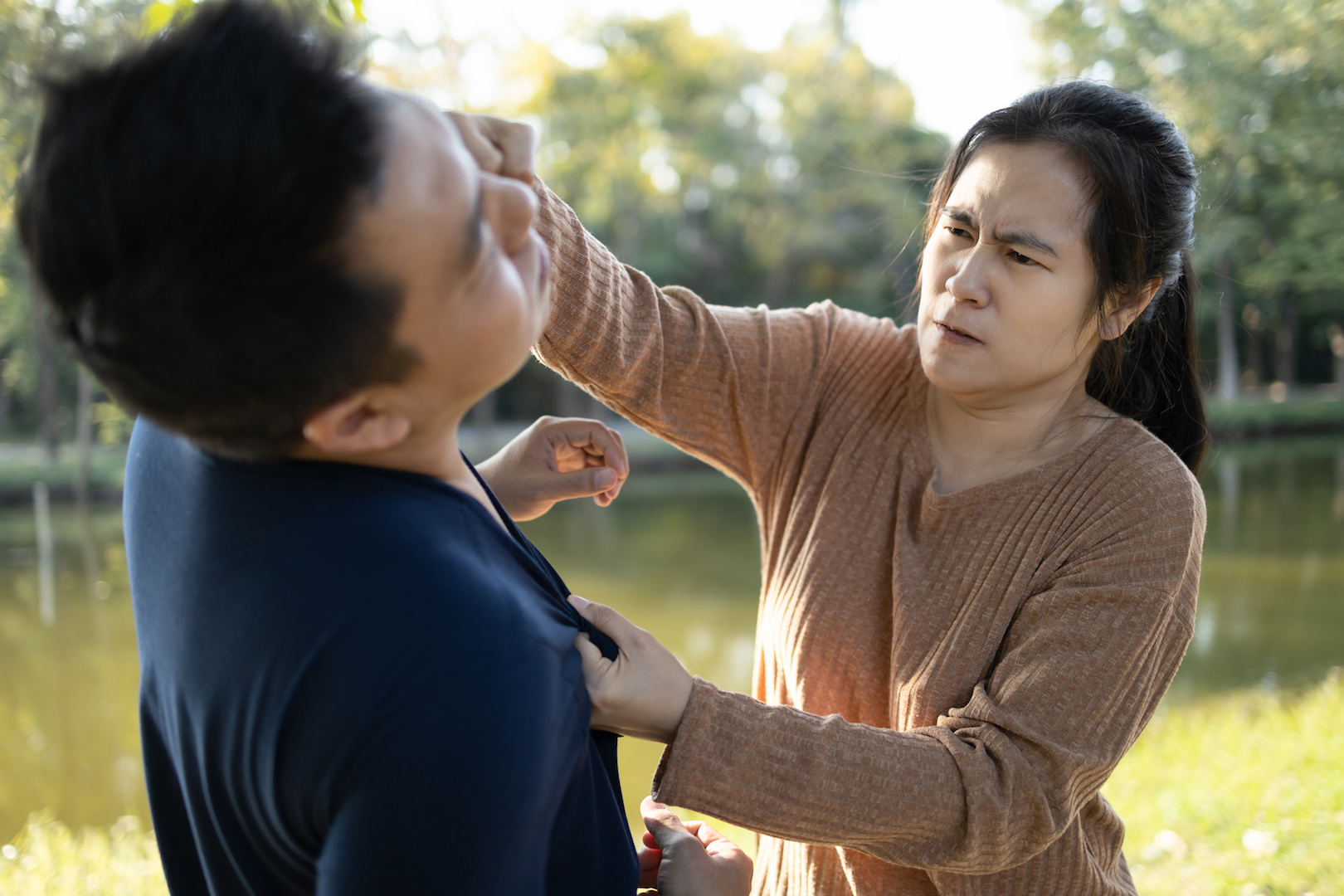 When we think of domestic violence, we don’t often hear about husbands being abused. It’s usually the wife who is the reported sufferer. Yet, there are many husbands who are the victims of spousal abuse. Yes, husband abuse is real; it does happen.

So why don’t we hear about husbands being abused by their wives? David L. Fontes, Psy.D, in the article titled, “Men Don’t Tell” gives insight into several reasons. He writes:

“When a man is a victim of his wife’s physical abuse he is both shamed by the assaults of his wife and shamed by society for not ‘controlling’ her better. Men are considered ‘wimps’ for letting their wives beat them or for complaining about their wives’ attacks. For many men ‘taking it like a man’ means don’t complain and don’t show you are vulnerable or in pain!

“With the prospect of being viewed as ‘wimps’ and/or having the assaults by their wives not believed or minimized by the general public and law enforcement, it’s no wonder few men report their abuse or discuss it openly.”

We, at Marriage Missions, can testify that many, many husbands are the victims of abuse, more than people realize. Part of this is because it’s difficult for men to report their abuse and find help. This is especially true in the Christian community. We’ve received a number of emails from husbands who are dealing with their wives abusive behavior. They write that they want to be honorable men and won’t abuse back. But they don’t know what to do to stop their wives from hurting them in these ways.

We’ve tried to find articles —especially Christian articles, written on this subject to help. But there seems to be very, very little help available for abused husbands.

Does that mean that it’s less important to minister to the hurting husband as it is to the hurting wife, even though the numbers “appear” to be less? Should a husband just accept and silently suffer from abusive behavior, if it is directed at him from his wife? No. Abuse is wrong no matter who is victimizing the other, male or female.

This article is written to give abused husbands a voice that is MUCH needed and overdue.

Maxine Marz wrote a Metronews.ca article titled, “Husband Abuse Erodes Dignity” where she had the following to say on this issue:

“While it is true that most physical assaults caused by women tend to be less severe when compared to a man’s physical assault on a woman with his fist or a weapon. But still, the abusive woman’s slaps, bites, kicks and/or pulling of her partner’s hair are nevertheless very hurtful. In addition to subjecting physical pain, they attack the man’s dignity and erode his sense of self-worth. Many men also encounter emotional abuse when their spouse uses their children to assert her control over the relationship.

“To add insult to injury, some abusive women not only victimize their spouses by abusing them verbally, emotionally, financially and/or physically, but they also attempt to manipulate the criminal justice system in their favour and against their partner. This unconscionable attempt of some abusive women not only re-victimizes their already abused husbands by denying them equal rights and fair protection under the law, but it simultaneously devalues and undermines the admirable progress women’s groups have achieved over the years in trying to protect the rights of legitimately abused wives and their children in the criminal courts.

“It is evident that our society has made positive strides over the years to bring needed attention to domestic abuse and to better protect women. Unfortunately, based on what many abused husbands currently experience, we still have a long way to go to afford them with similar protection of their safety and security. We need to eliminate the current gender bias in our system that re-victimizes them all over again when they step into the legal arena.”

Husband Abuse: Out in the Open

To help bring this type of victimization out into the open, we will provide several web site links to articles that you can read on this subject. We hope it will help husbands to better protect themselves.

The following is a Youtube video that shows a little taste of what some men go through as far as abuse. This is not a marriage situation. It is a boyfriend/girlfriend one where she is assaulting him in different ways, with part of it being caught on camera. It’s part 1 of a Tyra Banks television show that featured abusive women. The quality of this video isn’t the best. But the content is enlightening. Please watch and you will see a small part of what some men go through:

What struck me about the featured story is that if that man would have been the abuser, I believe with all my heart that the audience would have been outraged. But the woman was absolutely clueless as to the gravity of it all. Plus, the audience didn’t seem as moved, like they would have been if a woman was getting berated by the man. If he was acting as she did to him, the outrage would have been ramped up. But because it’s a woman hitting and berating a man, it’s more palatable. It shouldn’t be, because abuse is wrong no matter who commits it. And yet, that’s the way society views wife abuse as opposed to husband abuse. This is so, so wrong.

On a further note, the articles linked below, consist of stories of battered men. (Some of them are followers of Christ and others who are not.) In these blogs, they share their life experiences of being battered by women. Please read what they have written. Abused men and husbands need to be heard too:

The following articles and blogs are posted on various web sites that deal with the subject of husband abuse and battered men. These articles are not posted on Christian web sites. Please be aware of that. However, we believe they give good insights. They also provide a lot of helpful information. We encourage you to glean what is good —that which lines up with Biblical standards. And then throw away that, which doesn’t apply to your situation. As you pray, the Lord will show you what NOT to use. Let the Lord be your guide.

Please click onto the link provided below to read:

Many people ask why battered men don’t leave the abuse. They also question why do they remain silent? Murray A. Straus, a family violence researcher, gives this insight:

“There is a fear of having a 911 call turned around. If a man is being battered, is trying to protect the kids, and he calls 911, all too frequently he is the one who ends up being arrested. At a minimum, he may experience problems getting the police to believe that he’s been assaulted or that he needs the help of the police.

“Men are also less likely to call the police, even when there is injury. This is because, like women, they feel shame about disclosing family violence. But for many men, the shame is compounded by the shame of not being able to keep their wives under control. Among this group, a ‘real man’ would be able to keep her under control.”

And there are even more reasons. There is also help for men that are being abused. Read the following to learn more:

• WHY MEN DON’T DO ANYTHING ABOUT IT

• WHEN YOUR WIFE IS A BULLY

Read, Even if the Article Needs to Be Adapted

In addition, please read other articles that are provided on this web site in the Abuse in Marriage topic. They mostly address wives who are victimized by husbands. (Sadly, it’s difficult to find info that addresses husbands who are victimized.) Even so, we encourage you to ask God to show you how  to apply the advice that is given to your own situation. God can show you what advice you can use, and what you shouldn’t, or won’t be able to use.

We hope you find the help you need. May He help you as you reach out to Him —that is our prayer for you.

334 responses to “Husband Abuse: Can a Wife Abuse Her Husband?”