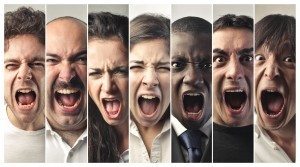 Have you fallen into the marital trap of unquieted anger? When it occurs, we let loose. Sometimes it surprises even us. I sadly confess that I’ve been there and have done that myself. It’s not something I’m proud of. How I wish I would have worked on my triggered anger issues sooner than I did! (So does Steve, no doubt!) But it is better later than never. And in all honesty, I’m still working on it. I certainly don’t have it all together! But at least I’m falling forward now instead of backwards.

Unquieted raw anger, can be assaulting to those upon whom we throw it. Counselor/author Leslie Vernick likens it to vomiting. And I agree. It’s a type of verbal vomiting. As she says:

“Doing this might provide some sort of relief but it is never beneficial to the hearer or the relationship. …You do feel better getting it out, but vomit belongs in the toilet, not on another person. Proverbs 12:18 says, ‘Reckless words pierce like a sword‘ and Proverbs 29:11 warns us that, ‘Only a fool gives full vent to his anger.‘” (From her article, Four Lies About Anger)

The Effect of Raw Triggered Anger

These raw emotions often come out in ways that dishonor who we are, especially as Christ followers. We’re told in the Bible, “If anyone considers himself religious and yet does not keep a tight rein on his tongue, he deceives himself and his religion is worthless” (James 1:26). OUCH!!!

In other words, it’s one thing to say that we’re Bible-believing Christians, but it’s another to actually live it. And when we sling words around carelessly —whether we think the other person deserves it or not, our “religion” or our witness to those around us, including our spouse, is “worthless.” The verbal assaults do not lead anyone towards Christ. Instead, they are repelled.

We’re also told in God’s Word, “In your anger do not sin. Do not let the sun go down while you are still angry, and do not give the devil a foothold” (Ephesians 4:26-27). ”Rid yourselves of all malice and all deceit, hypocrisy, envy, and slander of every kind” (1 Peter 2:1).

So, what do you do to change the ways in which your rage comes out when you and your spouse argue? I’ll share with you what I discovered that lead us to a better place when my husband and I argue. Perhaps it will help you in your marriage too.

First of all, I worked on my own personal issues. I stopped playing the blame game and looked in the mirror. I knew I needed to settle down in the way I expressed my anger. The temptation may be there to give into my anger in assaulting ways. But that didn’t mean that I had to give into it. It became my mission to dig down and find out why I did what I did. There was no doubt that I needed to figure out how to deal with my triggered anger in healthier ways.

I eventually saw that I had hot buttons in me where triggered anger spilled out when Steve would lean on them. I tried to shift the blame for my excessive anger upon Steve. For some reason I rationalized that it was his fault for pushing those “buttons.” But in reality, they weren’t “hot buttons” —they were impulsive reactions that I needed to deal with properly. No matter what, I can’t allow Steve’s actions or anyone else’s to get to me to the point of acting in ways that I shouldn’t. It’s important not to believe the lie that because I’m frustrated, or hurt so badly, solutions to do that, which I shouldn’t, are acceptable. They aren’t.

My poor reactions show that something infectious and wrong was/is inside of ME that needs to be dealt with. It’s my problem, more than anyone else’s. It’s my personal responsibility to work on it.

I’ve heard many people (including myself, earlier in my life) blaming their spouse for pushing their “buttons” as if it’s the other spouse’s fault for the venom that spewed out afterward. If only they wouldn’t push my buttons” … “He or she shouldn’t have done that!” PLLLEEEAAASSEE!!! If we have a soft spot within, which triggers a sinful response on our part whenever it’s “pushed,” then we need to work on it. It needs to be properly operated on, much like an infected wound.

Steve can press on my arm all he wants to and he won’t get much of a response out of me other than puzzlement UNLESS there’s an infection going on under the surface. And if there is, WATCH OUT!!! I’ll react. And whether or not I might not have done anything wrong to cause that infection, once I find out that it’s there, I need to tend to it so it doesn’t continue to fester.

We’re told in God’s word to:

“Make every effort to live in peace with all men and to be holy. Without holiness no one will see the Lord. See to it that no one misses the grace of God and that no bitter root grows up to cause trouble and defile many” (Hebrews 12:14-15).

Since realizing the truth in all of this, I’ve been working hard to deal with my infectious hot buttons or triggers. And eventually Steve joined me in this journey, working on his own issues, plus ours together. That’s what you do when you’re serious about being in partnership with each other within the covenant of marriage. Otherwise, you’re just pretending to be married when in reality, you’re more single-minded. We are to be cleaved together in partnership, as a “cord of three strands” —united with God and His ways of proceeding through life, as we’re supposed to be within marriage.

Work on Your Stuff

I don’t know what’s going on in your life. I don’t know the areas of hurt that SPEWS OUT and spills over, or you STUFF WITHIN and hold onto it. But I GREATLY encourage you to work on it. It’s holding you back from being the partner in marriage you promised your spouse you’d be on your wedding day. Don’t fall into the trap of hanging onto emotional stuff you should no longer carry. It will continue to cause problems in your marriage, if you do. Make it your mission to find out how to release it in healthy ways (no matter what “button” are pushed).

We have a lot of articles posted on our web site that you can glean through and use. You’ll find many of them in the Communication and Conflict, and the Communication Tools topic. They have greatly helped our marital relationship and each of us A LOT. I encourage you to glean through them. Ask God to guide you and help you apply the principles, which will work for your marital situation. Look at this as a personal journey you are taking with God —as your Wonderful Counselor as your guide.

“Listen to advice and accept instruction, and in the end you will be wise” (Proverbs 19:20).

One response to “Triggered Anger”