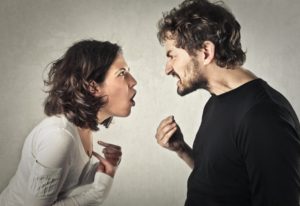 Does your spouse irritate you to the point that you can call yourself an angry spouse? Your emotions slide to the angry side quite easily. And this baffles you. But should it?

“The state of marriage generates in normal people more anger than they’re likely to experience in any other type of relationship in which they habitually find themselves.” (David Mace, marriage and family counselor)

Isn’t that true? It’s difficult to describe how angry we can get at our spouse. It might be because we expect more from them. Author Gil Stieglitz (in the book, Marital Intelligence) explains it this way:

“Anger is an emotional reaction to not having our expectations met. It is natural to feel strongly when our expectations are blocked, ignored, denied, resisted, or destroyed. This emotional feeling is like a live electrical wire flowing though our body. We always have the choice whether we are going to grab that wire and allow that sure of emotion to take over our body. It is immature to grab the wire and use those emotions and actions to punish our spouse or to win the argument through the display of raw emotion or violence.”

With anger being the most potentially destructive emotion in marriage we’re sharing some thoughts we found in a devotional book written by Richard Exley called, “Forever in Love.”

In this particular devotional chapter, Exley first asks why there is so much anger going on in marriage. Marriage is a relationship where you would think there wouldn’t be such hostility. He first makes the point that most anyone would be able to understand why there’s extreme anger going on in a marriage where there is betrayal, abuse, or alcoholism involved. But he then asks, “Why does a relatively good marriage generate so much anger?” He addresses the question this way:

“It must be because we care more about our marriage than we do about any other relationship in our life. We care what other people do, but only up to a point. Because they aren’t a permanent part of our life, their actions have no lasting effect upon us. And we seldom allow them to make us angry for more than a brief moment. In marriage, things are different. What our spouse does, what he/she feels, or thinks, has a direct bearing on our own well-being.

“Although love and anger are poles apart, they are not opposite emotions. Rather, they’re two sides of the same coin. Love is the positive expression of deep feelings we have for our spouse, while anger is the negative expression of those very same feelings. It is accurate, I believe, to say that the amount of anger we’re capable of feeling is often in direct proportion to how much we love.

“Having said that let me hasten to add that the inappropriate expression of anger is one of the most destructive forces in a relationship. Mismanaged, it can tear a marriage apart. No matter how much we love our spouse, it’s virtually impossible to overcome the hurt. And distrust caused by our reckless anger.

“As one emotionally devastated wife so aptly put it: ‘It takes a hundred kind words to undo the damage from a single angry word.’

“It’s critically important, therefore, to manage the anger in a relationship. Find nondestructive ways of dealing with it. Make it a friend instead of a foe. Learn to make it productive.

“According to Howard and Charlotte Clinebell, authors of The Intimate Marriage, ‘Occasional outbursts may make it possible for marriage partners to be more caring and compassionate at other times. A relationship strong enough to take such outbursts in its stride is a healthy one. Providing a place where one can drain off hostility that has accumulated in the outside world is one of the most important mental health functions of a good marriage.’

“But they go on to point out that, ‘Chronic verbal attacking is not a means of maintaining a healthy marriage.’ Remember, anger is a powerful emotion. It’s one that should be handled with care.”

Author Richard Exley then gives a suggested “Love in Action” point to follow through with your spouse on this subject. He challenges you to:

“Take some time with your spouse and discuss the role anger plays in your marriage. Is it constructive or destructive? How could it be better handled?

Now, we understand that this could be a challenge to those who are in abusive marriages. And if you are, we highly encourage you to read through the Abuse in Marriage section of this web site. Take advantage of the other resources and web sites that are recommended. We recognize that you need all the help you can get. That’s why we continually look for material that could help you and your spouse. It is our hope and prayer that the Lord will speak to your situation now and in your future.

• MY SPOUSE HAS AN AWFUL TEMPER

• HOW TO DEAL WITH YOUR ANGER

• STOP YOUR IMPLOSIVE AND EXPLOSIVE RESPONSES TO ANGER

Also, a below are few additional articles we found at Todayschristianwoman.com to help you, which we recommend you read:

And for one additional tip that might help diffuse an angry situation, below is a tip written by Dr Gary Chapman. It comes from his book, The Other Side of Love:

“There’s a little card I asked the publisher to put in the back of my book. It’s some thing people can tear out and put on the refrigerator. It says: ‘I’m feeling angry right now. But don’t worry. I’m not going to attack you. But I do need your help. Is this a good time to talk?’

“This is a good way to begin taking constructive action when your mate does something that really steams you. You take the card off the fridge and read it to your spouse. It creates a little humor and breaks the ice. Once your spouse has agreed it’s a good time to talk, then you can say, ‘Here’s what I’m feeling. And here’s the way I’m interpreting what happened. If I’m seeing it wrong, please tell me.'”

(You can find more tips in the Todayschristianwoman.com article, Count to Five. This is based upon Dr Chapman’s book.)

Scripture of the Day

“Reckless words pierce like a sword, but the tongue of the wise brings healing.”
(Proverbs 12:18)

(For your information, the book, Forever in Love, is written by Richard Exley. It contains 53 devotionals, but it is no longer in print, except as a used book.)

Let’s be sure to live out Christ’s love through our marriages so that others would be drawn to Him as well.