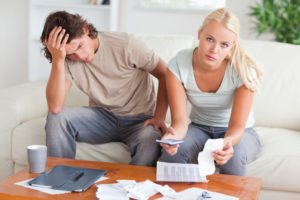 By a show of hands, how many of you have never had an argument over a money issue? If you did raise your hand, my guess is you haven’t been married longer than 15 minutes.

The truth is we’ve all argued about money. Either we have too little of it or we can’t agree on how we should use the money we have. For many couples the topic of money is the most volatile issue in their marriages. If asked, they’d probably say they have a good marriage, except for one issue —money. So this week Cindy and I want to share with you something from the book, The Healthy Marriage Handbook

from the editors of Marriage Partnership Magazine.

This book offers answers to more than 200 questions relating to marriage. Jay Kessler (the former president of Youth for Christ International and Chancellor of Taylor University) answers this one:

QUESTION: Since my husband often spends money we don’t have, we decided to create a budget that allows for individual allowances. Yet, even with this arrangement, he continues to spend more than the amount that is allocated to him. We’re struggling to meet our basic financial obligations and his careless spending makes our financial situation even more tenuous.

Besides feeling betrayed by his irresponsible behavior, I’m tired o playing the heavy who must enforce the rules. What other options do I have that would improve the situation?

ANSWER: Statistics indicate that money is one of the leading causes of divorce, but that’s because money is symbolic of so many things—effort, self-worth, and status, to name a few. It’s also a symbol of your unity as a couple. But perhaps you can also see your situation as a manifestation of complementary personalities, which are usually considered strength in a marriage. You’re the responsible one, balancing your husband’s more laissez-faire attitude toward money.

Though it’s understandable that you’re tired of playing the “heavy,” consider your other options. You can leave the situation as is, and endure a chronic emotional headache. You can give up and dodge creditors for the rest of your life.

Or you can suffer serious marital problems over it. The option you’ve chosen, to try to confront the situation and work out a solution, really is the best way. In financial matters, if one person doesn’t take responsibility, the family can fall into debt to the point of ruin.

I urge you to confront your husband. But see it as a challenge brought on by your complementary personalities, not just as his problem. Say, “We as a family have a problem. The problem is we don’t have enough money to go around. Together we need to decide on a way to solve this dilemma.” Let your husband know how serious this is to you and how much you fear for your future. Then suggest any or all of the following.

Many people who experience this problem go to a financial counselor. In effect, the counselor becomes the “heavy” to which you are both accountable. He or she sets up a system for you to follow. Because you’ve paid someone to help you, and because it’s more embarrassing to lose face in front of someone outside the family, this method often works. Of course, your husband would have to be willing to meet with this person.

Another option, if you decide to try it on your own, is to move to a cash-only system. It sounds like you’ve attempted at least some version of this; you may need to take it a bit further.

I’m amazed at the number of people from all economic and educational levels who work this way, simply because their credit card was too tempting and they got into trouble. Basically what you do is destroy your credit cards (or, if you’d rather, agree that you alone will keep them for emergency use only).

You, as the spouse who finds it easier not to spend money would keep the checkbook. Together you divide up cash in envelopes marked for certain purposes. Then you each live off the money in your envelopes for the week.

If, say, by Wednesday your husband’s money is gone and he has no access to the checkbook or credit cards, he’s going to have to come to you and say he’s out of money. Then the two of you can rationally decide why that happened: did you not allow enough money, did he spend too much on lunch, and did he buy something else that wasn’t in the budget?

He may have to make some tough choices, such as not eating much for lunch at the end of the week. It’s possible that this may be the first time in his life that he confronts the consequences of his spending choices.

There are also a number of books written by Christians that deal with this issue. Visit the bookstore together and select a book you both can agree on then work together to follow the author’s advice. Whatever you do, don’t give up and allow your family to fall into massive debt. You’re on the right track—don’t give up. (Jay Kesler)

And we hope you won’t give up either. It’s a difficult bridge to cross —to get to a side of spending money in a way that both spouses agree.

Something good to remember is that as followers of Jesus Christ, every purchase we make is as much a spiritual decision (of how we spend that which God supplies) as it is a financial one.

Another good point to consider is one that financial expert, Dave Ramsey made in an article titled, The Truth About Money and Relationships. He said,

“As you work on your money together, you will begin to change your family tree. One of your main goals in your marriage should be to pass a legacy down to your children and grandchildren.”

Questions that come to mind are:

Think about it… pray about it, and then do what you can to make sure YOU are spending your money in a way that will shine as a good steward of everything God would have you.

And in this process, don’t forget to treat each other with the love and respect God would have you give —treating each other as more important than yourself —using Christ as your example of sacrificial love.