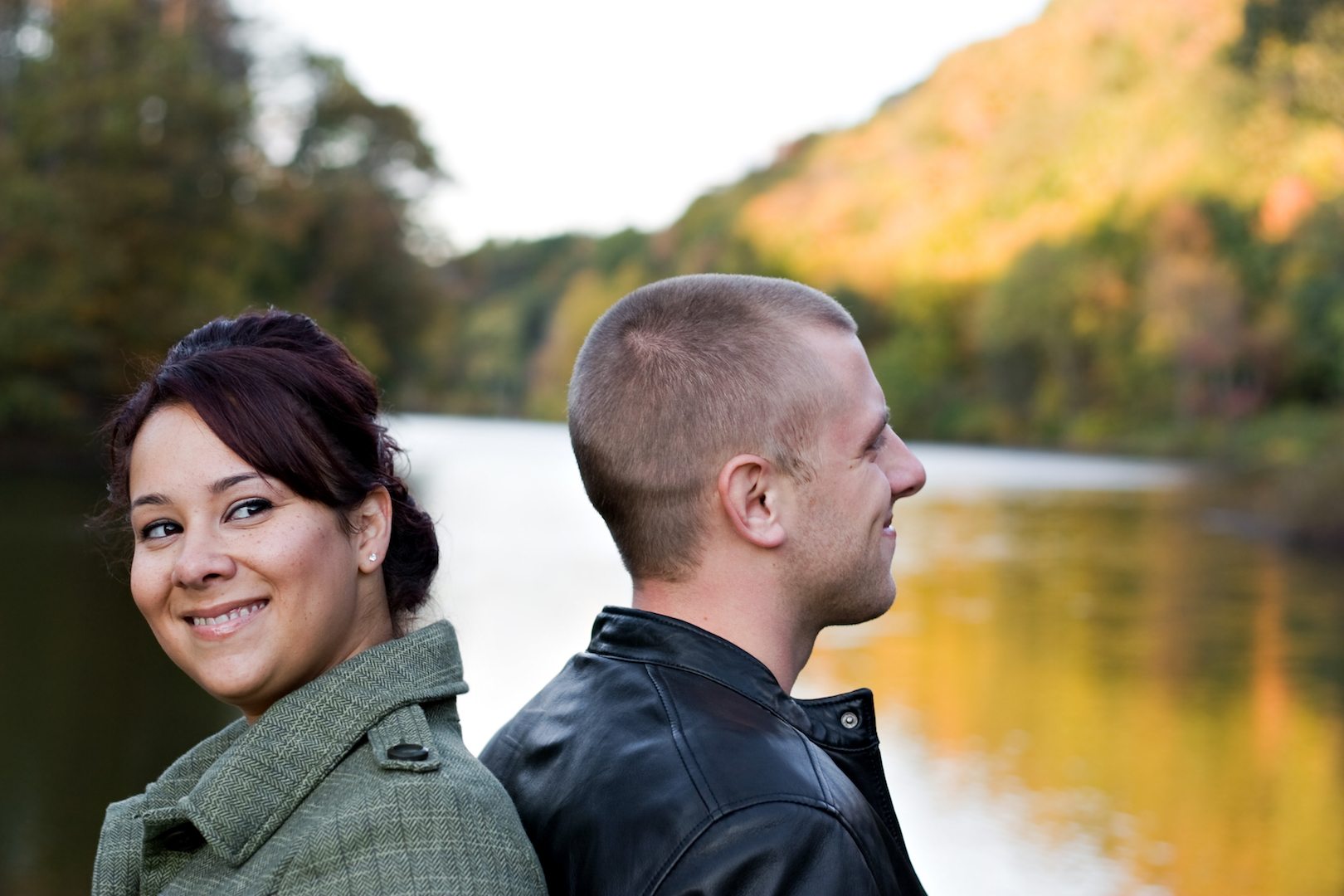 Are you and your spouse completely compatible? Do you agree about every issue that comes up in your marriage? We’re thinking that your answer would be, “no!” If it was yes, then you would be the unusual couple, rather than the norm.

More than likely, you (like we) have discovered many areas of “incompatibility” that jumps in to cause you to disagree with each other. The question arises then, what do you do about it when this happens.

“What counts in making a happy marriage is not so much how compatible you are but how you deal with incompatibility.” (Leo Tolstoy)

This is so very true! That’s what we’ve discovered. Steve and I are very different from each other. We didn’t realize how different we were until after we married. And then it hit us big time. But eventually, through a lot of trial and error, we learned how to work through our incompatibility. We are learning to make our differences work for us, rather than against us. It’s amazing how great this can work when we combine our skill sets.

Also, on those areas where we’re just “different” … we’ve learned how to work through them without causing relationship damage. We have learned to be compatible, one choice at a time. We WILL work through our differences. And we WILL do it in such a way that it is healthy, and God-honoring. That is a skill set we had to learn. It took time and effort, but it sure has been worth it.

“Virtually all couples, happy and unhappy, are going to argue, particularly in the early stages of marriage. What tends to predict the future of a relationship is not what you argue about, but when you do argue, how you handle your negative emotions.” (Howard Markman)

Does the above statement make sense to you? It makes more sense to us as we continually research marriage compatibility. We used to think that happily married couples had discovered the secret of not arguing with each other. It was our belief that conflict was what destroyed good marriages. But holding onto that expectation actually caused more problems than anything else.

We now know that the problem isn’t that we disagree with each other. It’s how constructively we’re able to work through it. It’s important that the relationship stays in tact and loving. And that comes about because the couple acts in respectful ways even when disagreeing. They honor the other spouse’s feelings—which, of course, is biblical.

“Compatibility is not about similarity. While similarities can create compatibility in some areas, there are times when being opposites is more helpful. For instance, when one person is quick to anger and their partner isn’t, they may find themselves having fewer arguments than they would with another reactive person.” (Kathy Batesel, From the Pairedlife.com article, “5 Pillars of Compatibility (& Incompatibility)”)

The point is to work with your differences, and your incompatibility. This means learning how to handle conflict when you’re doing so.

We came across an article featured in The Wall Street Journal (November 3, 2004) titled, “The Key to a Lasting Marriage.” It talks about incompatibility and handling conflict. The point is made that “even happy couples aren’t really compatible.” This seems like a surprising statement. But as we share portions of this article (and others), you may see that being compatible isn’t the biggest issue. It’s what you do with incompatibility.

The author, Hilary Stout, starts out by saying:

A growing body of research suggests there’s no such thing as a compatible couple. This may come as no surprise to all those who have endured years of [heat/air conditioning] thermostat wars, objectionable spending habits and maddening tendencies at the wheel [of a vehicle]. But it flies in the face of Hollywood, Shakespeare, most people’s fantasies, and all those dating Web sites selling scientific screening to find a perfect match.

Years of relationship studies by some leading figures in the field make it increasingly clear that most couples, whether they’re happy or unhappy, have a similar number of irreconcilable differences. What’s more, all couples —happy or not —tend to argue about the same things. Top of the list, whether you are rich or poor, is money. Other common topics include household chores, work obligations, kids and differing priorities.

“Compatibility is misunderstood and overrated,” says Ted Huston, a professor of psychology and human ecology. Mr. Huston and his colleagues have been following 168 couples since they married during the 1980s. This study and others like it make it clear that most disagreements that arise in a marriage — 69% of them, are never resolved, according to work by John Gottman (a relationship researcher at the University of Washington).

We had never thought of that before, but it’s true. There are sometimes when we just have to agree to disagree. Other times we decide upon a “happy” medium where we can both live with the issue. It may be a matter of one spouse being more social than the other. It may be that one spouse likes different types of entertainment than the other. The list can go on. But one thing Steve and I have learned is that when you purpose to, and you ask God for wisdom, you can come up with ways to make your differences work for you. Your marriage does not have to suffer. It gains because you have come up with a way that works for both of you.

Keep in mind something that Dr Willard Harley wrote:

“Whatever you cannot agree upon defines an area of incompatibility. It needs to be replaced with a compatible alternative. And you’ll find that each resolution solves a repeating problem. Your conflicts are not usually isolated. They revolve around an issue that comes up again and again. Once you find the answer, you sweep many future arguments out the door.” (From the Marriagebuilders.com article, “How to Survive Incompatibility”)

The important thing is to work through your incompatibility in compatible ways. And that means you need to learn how to argue in healthy ways.

Scott Stanley, co-director of the Center for Marital and Family Studies at the University of Denver and co-director Howard Markman have done extensive studies tracking couples from courtship through years of marriage.

But the bottom line, Markman says, is that “virtually all couples, happy and unhappy, are going to argue. “What tends to predict the future of a relationship is not what you argue about, but when you do argue. It’s how you handle your negative emotions.”

This has led some in the profession to develop rules that can make arguing less destructive:

• Don’t escalate an argument by blurting out generalizations: “You always…” Stay on the specific subject. Don’t drag past events, behavior and lingering grudges into the discussion.

• Try not to interrupt. Let your spouse finish making a point before you jump in.

• Take a little time to cool down after a heated argument. But within an hour, Mr. Gottman recommends having a “reconciliatory conversation.” This will result in a more level-headed, productive discussion.”

The article then tells of an experiment conducted at Dr Gottman’s Relationship Laboratory where they videotaped couples arguing. During that time they monitored their heart rate.

Research has shown that if your heart rate exceeds 100 beats per minute you usually won’t be able to rationally listen to what your spouse is trying to tell you no matter how hard they try. It is suggested to take a 20-30 minute break before continuing.

When their heart rates rose above 100 the researchers interrupted them. They said (falsely) that their equipment was malfunctioning.

They asked couples to stop and read a magazine until it was fixed. Once both people’s heart rates had dropped down to normal range, after about a half-hour, the researchers announced the equipment was fixed. The couples then started up their disagreement again. The change after the interlude was marked. “It was like it was a different relationship,” Mr. Gottman says. Everyone was “much more rational and creative.”

While airing differences is important, make sure to set aside some time where discussing areas of discord is off-limits, Mr. Stanley and Mr. Markman say. A walk by the river on a beautiful autumn day isn’t the time to bring up problems. It is a time to enjoy each other and remember what attracted you to each other in the first place.

Instead set aside a time to talk about the things that are bothering you.

But when you do, make sure it isn’t at a H.A.L.T. Time. That is a time when either of you is Hungry, Angry, Lonely, or Tired. During those times, you are less open to settling the disagreement in an agreeable manner. Here are a few guidelines that Scott Stanley suggests:

The following are some tips for fighting effectively with your spouse:

• Stay focused on the subject of disagreement.

• Don’t bring up past events and old grudges.

• Don’t use inflammatory language, like “This marriage is doomed.”

All of this comes down to being respectful of one another —even in your anger. In Ephesians 4:26-27, the Bible says, “In your anger do not sin. Do not let the sun go down while you are still angry. And do not give the devil a foothold.” The explanation given for these verses in the Life Application Bible reads:

“The Bible doesn’t tell us that we shouldn’t feel angry. It points out that it is important to handle our anger properly. If vented thoughtlessly, anger can hurt others and destroy relationships. If bottled up inside, it can cause us to become bitter and destroy us from within. Paul tells us to deal with our anger immediately in a way that builds relationships rather than destroys them. If we nurse our anger, we will give Satan an opportunity to divide us.”

Honor God and Each Other

So the challenge isn’t to eliminate conflict. It is to find ways to deal with it so we honor each other and honor God.

We hope all of this helps. For additional material that you may find helpful on this subject, look through our web site. Look at the articles we have posted here. A few that you might find helpful are Weekly Connection Times with Your Spouse … Covenant Guidelines for Resolving Conflict (Condensed Version), and then Resolving Conflict Guidelines with Scriptures. Prayerfully glean through them and see what you can use to help you become more compatible in your marriage. And then most importantly, APPLY WHAT YOU LEARN!