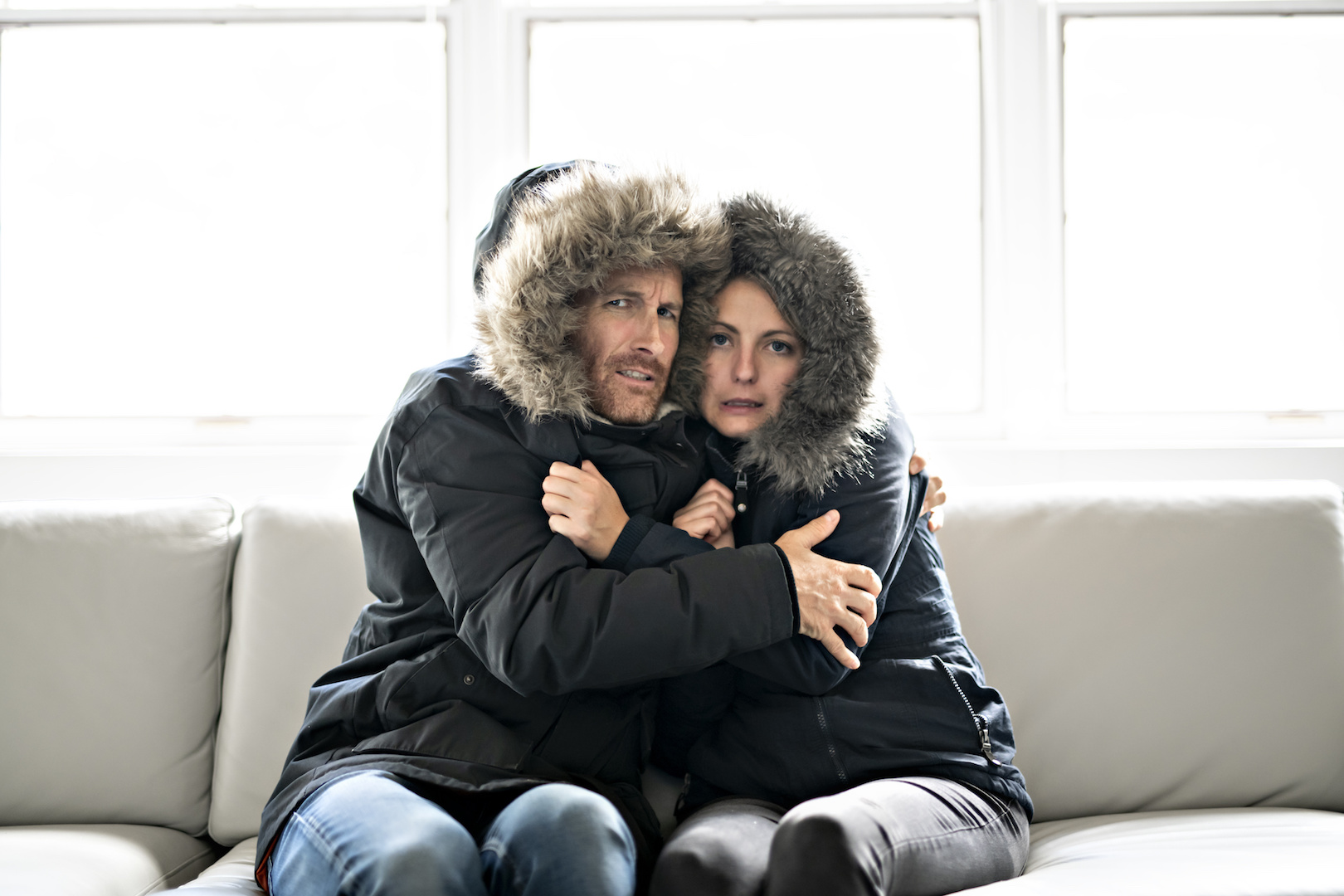 Brrr!!! It has been cold outside this winter in most of the U.S. We’re talking bitterly cold. Although, we have to admit that we’re doing better than most because we live in the desert southwest. Even so, it has been (relatively) cold outside for us too. But with all of this cold weather, an important question came to mind. How is the climate INSIDE our homes? What about your home—specifically your marriage? Is it frigid, cold, warm, stormy… or what?

As we’ve pondered this question we found something that pastoral counselor, Bret Legg said that pertains to this matter. He wrote:

“These days, the subject of climate change is all over the media. Though there are differing opinions on the subject, one thing is for sure. Marital climate change is real. Climate change is said to be the gradual warming of our atmosphere due to the increased emission of greenhouse gases. It’s being blamed for an increase in average temperatures, erratic weather patterns, increased flooding, rising sea levels, and more.

“Marital climate change is much the same. Spouses release things into their marriage that gradually changes the atmosphere of the marriage over time.” (From his article, Marital Climatic Change, which we recommend you read.)

Isn’t that true? When we live together day in and day out, we “release” a lot of things into the atmosphere of our marriages. Some are good, and some are not so good. True?

The Climate Within Our Marriage

I (Cindy) have to admit that a few weeks ago, things got a bit “chilly” around here. Actually, it was downright cold. That’s because I woke up in a bad mood, and I didn’t shake it off. Have you ever experienced that? There wasn’t any particular reason for it; but it’s like a cloud was hanging over my head. My attitude stunk! And then when Steve approached me in a way that I wasn’t pleased, I was not pleasant to him, to say the least. My bad mood then became our mutual bad mood. And then as the day wore on, our behavior digressed from bad to worse.

When Steve went to do an errand, I spent some time with God. (I should have done that earlier in the day. But sadly, I didn’t.) Later, as I was reading my Bible and praying, I heard the following words in my thoughts, “You know you need to apologize to Steve.” These were not my thoughts, because that’s the last thing I wanted to hear or say. Immediately, I knew it was true, though. After spending more time with God, I approached Steve. I even used similar words. “We both know that I need to apologize to you.” Steve just listened.

I confessed to my horrible mood and humbly apologized to him. As I told him—I should have warned him that I was in a bad mood. And then I should have spent time alone with God to get His help in getting past it. But I didn’t. And just like a healthy person can catch the flu from an infected one, I “released” my bad mood upon him, and he caught it.

Have you been the giver or receiver of that type of infected marital climate? It would be unusual if you haven’t. Marriages are breeding grounds for passing back and forth all kinds of nasty attitudes.

But we can definitely improve upon the climates of our marriages. Steve and I hardly ever act that way towards each other anymore (like we used to). Part of the reason is because we’ve made it (and continue to make it) a point to be active students of each other and students of marriage. We highly recommend that every married couple makes this their mission. It’s an important one! We bring too much unhealthy baggage and unrealistic (often unspoken) expectations into marriage, not to do this. Most often, we don’t even realize we do this. As a result, we experience changes in the climates of our marriages.

So, in all of this, here are several important “lessons” to take away and use:

This brings warmth to the climate of your marriage.

“Some couples live in a climate that is perpetually chilly. They don’t argue with each other; yet there isn’t a sense of warmth or intimacy between them. They go about their daily routines and never really connect. Other couples exist in a climate that is stormy. It’s filled with arguments. These couples can’t seem to agree on anything. And talking about issues only seems to make matters worse. Others live in a climate that is partly cloudy. Communication is fine so long as certain topics—finances, sex, schedules—are avoided. Like rain clouds, these topics hang over a marriage. They threaten to disrupt intimacy if discussed.

“Then there are some couples that seem to live in a state of never-ending sunshine. They seem to always be happy, affirming of one another, and never utter a harsh word toward each other. The key for each of these couples is to understand how their climates formed. Plus they need to understand what it takes to maintain or alter them.

“How you interact with your spouse on a daily basis is the single greatest factor that establishes the type of communication climate that surrounds your marriage. It isn’t ‘what we communicate about that shapes a relational climate,’ note communication experts, ‘as much as how we speak and act toward one another.’” (Tim Muehlhoff, from the Biola University web site article, “What’s the Climate of Your Marriage?”)

All of this goes along with something that Dr John Gottman found in his research:

“The issue isn’t whether you fight with each other, it’s HOW you fight and how rich your stockpile of good feelings is about each other to weather difficulties and keep your basic attitude toward your partner positive.” (We recommend you read the article, It’s Not IF You Fight But HOW You Fight That’s Important.)

So, the lesson learned is:

And then below are a few more tips we have learned on our own and from the experience of others:

As far as communication:

• “Take a climate reading before discussing a key issue. Don’t just jump into serious discussions about key issues. Instead, make sure that your current marriage climate can support the stress of difficult conversations before starting them. When the climate is right, your discussions will have a better chance of being productive than if you and your spouse talked at the wrong time. If you need to improve your marriage climate, call a marital truce, temporarily avoiding controversial issues and overlooking each other’s offensive actions so you can strengthen your relationship.” (Tim Muehlhoff, from his book, “Marriage Forecasting: Changing the Climate of Your Relationship One Conversation at a Time”)

Plus, relationship expert Dr Gary Chapman talks about the fact that:

In an interview we heard with him a while back, he said:

“A lot of folks have a negative attitude. They have the attitude of ‘this marriage is never going to be better. It has been too long. Nothing is ever going to change. And I’m stuck.’

“You begin to think positively. And what happens is you begin to change the climate of the marriage simply by your attitude. Consequently, your spouse is more likely to make some of those changes.”

And then when Storms Hit Your Marriage:

When storms hit your marriage here’s some great advice:

Joey O’Connor, in his book, “Women Are Always Right and Men are Never Wrong” advises the following:

“When you and your spouse are going through changes, particularly difficult transitions like a move, a job loss, or a death in the family, it’s tempting to want to hole up inside of yourself. You’re tempted to pull away from your spouse. But what’s crucial during this time, though, is to have a clear and consistent communication with one another. Don’t allow change to eat away at the common ground that keeps you together. Lean into God and lean into one another. Do this through sharing your thoughts, feelings, hopes and fears, dreams and goals. As you do this the common ground you share together will stand fast against the storms.”

We agree wholeheartedly! We want to repeat the above advice. Above all, it is most important to lean into God and lean into one another throughout your marriage. That is the best advice we could ever give you. Going back to our petty argument the other day, one of the biggest problems was that we didn’t start our day in prayer. We usually do. But we didn’t on that day. It sorely showed. It was a big mistake. So here’s an important piece of advice:

God is love, so who else can teach and empower you to truly love one another? God sure has helped us! And we know He can help you.

• Pursue the “we” that God wants to create through your marriage.

God has plans to use you in ways that goes beyond anything you could do apart from being married to each other.

In closing, the following is a prayer that Jonathan Pitts wrote (in the book Emptied, which he and his wife Wynter wrote). We encourage you to pray:

“Father, from the very beginning of our days together, I’ve seen your supreme hand at work. Even as I have focused on me, You have seen a we, and Your hand has continued to push me away from my own agenda and closer to Yours. Lord, I am in desperate need of Your help. That is because on my own, I continually get in the way of what You’re doing. Help me focus on the fact that what You have started, You will continue. What I cannot accomplish on my own is Your specialty. Be gentle with me as You empty me of anything and everything that keeps me from pursuing the we You have in mind. In Jesus’ name, amen.”

May God bless the climate of your marriage as you follow Him!

Just So You Know:

We give a lot of practical advice to help you change the climate of your marriage in our book, 7 ESSENTIALS to Grow Your Marriage. We hope you will pick up a copy for yourself. (It’s available both electronically and in print form.) Plus, it can make a great gift for someone else so you can invest in their marriage. And who doesn’t need that? Just click on the linked title or the “Now Available” picture below to do so:

3 responses to “How’s the Climate Within Your Marriage?”