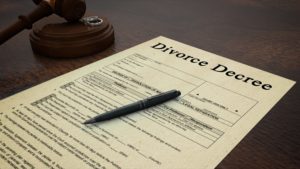 Don’t be a divorce pusher. What do we mean by that? No matter what your friend or relative or anyone else is going through in their marriage, don’t try to encourage them to divorce. Divorce is a decision that is between them and God. By encouraging them to divorce, you are stepping into a part of their marriage where you have no biblical stand.

Yes, be an encourager where you show loving support to your friend or relative. Listen and pray for them. Encourage him or her to pray, and seek God’s wisdom. Also encourage him or her to make wise decisions to find healthy ways to resolve conflict. They may need to find a “marriage-friendly” counselor to help them. (We have articles in the Marriage Counseling and Mentoring topic, which explains what I mean by that terminology.)

Resist the Temptation to be a Divorce Pusher

But no matter how tempted you are to want your friend or relative to find peace, DON’T encourage divorce. You have no idea what God wants to do in his or her life. If you tell your friend or relative to divorce because “he’s (or she’s) not good enough for you” —you are a divorce pusher. And by doing this you may be standing in the way of what God wants to do in and through this mess.

An example of what I mean is found in the “Fireproof” movie clip titled, “He Said, She Said”:

I’m not saying that this person should stay in abusive situations, or should be a doormat to cruelty. But it isn’t up to you to push him or her to divorce. Protect himself or herself, yes … lay down healthy boundaries, yes. Even encouraging him or her not to allow unfaithfulness to be lived out in the home, yes, but divorce? That’s something that this person needs to talk to God about.

The following is another scene from the movie, “Fireproof,” that we need more of us to do —to confront a friend, even though it’s difficult:

There’s a scripture that comes to mind with how this one friend spoke to the other. “An open rebuke is better than hidden love! Wounds from a sincere friend are better than many kisses from an enemy.” (Proverbs 27:5-6) If you know anything about his movie, and about being a “sincere friend,” sometimes tough words are spoken. But there can still be kindness involved.

If you push for divorce, you are going against the scripture (Matthew 19:6). We’re told, “They are no longer two, but one. Therefore what God has joined together, let man not separate.” YOU would be pushing to separate what God “joined together.” You can be supportive and not hurt this person further by encouraging him or her to seek wisdom from God and act upon it. You can be a soft shoulder to cry upon or someone who stands WITH him or her through the tough times and beyond. But there is MUCH TOO MUCH divorce pushing that is going on.

I’m not saying that you abandon this person. Just don’t push this person in a direction that you have no business pushing, for them to divorce.

A few additional scriptures come to mind, as they apply to pushing divorce:

Please don’t invite the possibility of leading them “astray” on something as important as divorce. There are some ways in which we can give counsel for them to consider. But when it comes to splitting up a marriage, even though it is not a private matter, YOU should not be one who could push them over the edge to encourage it. Let God do His work. Pray, and be supportive, but don’t be a divorce pusher.

14 responses to “Don’t Be a Divorce Pusher”