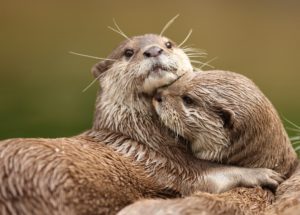 Last time I wrote a blog, asking the question, Drifting Apart? I’d like to expand on that idea a bit more because it has not left my heart. When we drift apart we need to find ways so we’re drifting back together again.

As I said in my last blog, when I’m told that a couple —particularly a Christian couple, claim they have “drifted apart” my first reaction is that they need to put the effort in to drift back together. Actually, usually they need to make the effort to swim back together. If they’re considering divorce because they’ve drifted apart, it’s not likely they’ll drift back together as the Otters did in the Featured Video. It will take intentionality and effort. But it isn’t the impossible swim.

I think too many people think that once you “fall out of love” or once the spark leaves the relationship, it’s all over. You’ll never be able to love your partner again in a way that is romantic. And that just isn’t true. God, whose very name means LOVE can teach us to love each other in a REAL way. But we have to be willing to participate.

One of the pieces of advice missing from many premarital counseling sessions and from many wedding ceremonies, is letting couples know that a good marriage doesn’t just happen. There is some pro-active assembly required. And sometimes a whole lot of assembly is required. Just as some wedding gifts come that way, so do some marital “gifts.”

In our naivety before marrying, we often don’t realize it or believe it. We might say we do, but our actions afterward tell a different story. We reveal our belief system by our words AND our actions.

Paul Byerly, who heads up The-generous-husband.com, wrote a blog that you might find helpful. I recommend you read it after clicking onto: Marriage —Some Assembly Required.

As far as learning how to “assemble marriage” for you and your spouse, so you can swim to the place where you can build a good marriage, I encourage you to become students of marriage and students of each other. Learn what marriage REALLY requires. And learn more about your spouse so that you can find ways to build relationship bridges.

It might be a good idea to go into the Marriage Prep Tools topic. This is so you can ask each other some important questions. Yes… I know you’re already married. But some of you skipped some pretty relevant questions you should have asked each other previously. This isn’t a time to interrogate each other. You are to make the time (as suggested in the 22 Minute Date) to mutually ask questions and LISTEN. Truly listen to each other’s words, and hearts.

Pre-judging, sarcasm, picking a fight, and contempt in words or attitude need to be “no-no’s.” After you say, “I do” to marrying someone it’s time to grow up. It’s time to put away childish behaviors. Unfortunately, “some spouses become parents long before they’ve stopped being children.” Marriage is for grown-ups who are willing to act like partners, not children acting like opponents.

We have “Conversation Starters” in the Communication Tools topic. Plus there are other tools that can help you with that mission. It’s important to learn how to work through your disagreements so you don’t damage each other. That’s most likely one of the problems, which damaged your marriage in the first place.

Pro-Actively Drifting Back Together

We even have an article posted in the “Marriage Enrichment” topic titled, Getting a Master’s Degree in Marriage. I recommend you read and other articles the Lord shows you, as well.

Again, we have all kinds of tools and articles and recommendations on our web site that can help with all kinds of dynamics you may have going on between you that need attention. Look around. Ask the Lord to be your guide, as your Wonderful Counselor.

But please know that you both have to have the “heart to” do what needs to be done and do it. The “how to’s” are available, but if you don’t pick them up and use them, as you’re each motivated to do so, they will be useless.

“The marriage ceremony isn’t like graduation; rather it’s similar to the first day of kindergarten! It’s not the culmination, but the beginning.” (Susan Alexander Yates)